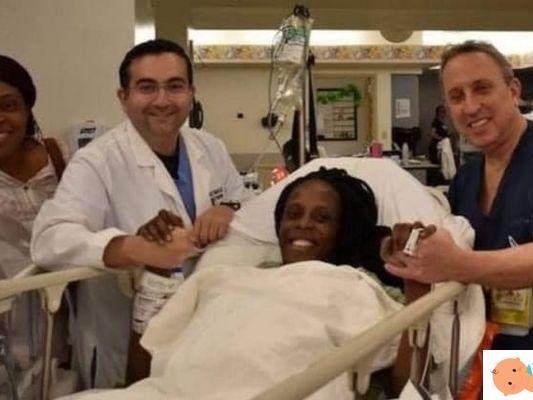 Nine out of 10 newborns were born by caesarean section. It happens in a clinic in the city, the Mater Dei, Parioli district, known as an avant-garde structure.

The near record emerges from the report drawn up by the Lazio health services agency (Asp) updated to the first quarter of 2008, which places the clinic in second place in the ranking of births with a scalpel. 84,4% of children came into the world with this system. Almost 9 out of 10 in fact. It was only surpassed by Villa Europa, Eur district, which reached 86,2% before closing for reasons related to ownership.

But that of caesarean sections - reads the Corriere - is a trend which is rapidly establishing itself throughout the country, in some Regions more than in others, except for local situations, despite the fact that every year guidelines and health plans aim to reduce percentages of caesareans higher than the rest of Europe.


Enrico Zupi is one of the nine gynecologists who work at Mater Dei and tells the Corriere: “There is no reason to be criminalized. It is an understandable attitude. We doctors are denounced for events and complications that cannot be classified as mistakes, which do not cause damage. We apply defensive medicine. And until they decriminalize the medical error, so it will be. We are not martyrs. And if a woman is minimally at risk, we push her towards surgery, if she is not the one who asks for it as most of the time, especially when it comes to informed women. It is a free choice of her that we respect. The incision is minimal, three days of hospitalization, limited pain, light anesthesia ".

Zupi rejects the suspicion that the gynecologist's interest lies behind the caesarean sections: “It is not true that the caesarean section pays more. From the point of view of the fee there is no difference with the vaginal. The cost of the operating room? With us it is 900 euros per hour ".

There is a sense of surrender towards the cesarean among health workers. Corrado Melega, Maggiore hospital in Bologna says: “We are at 29% in the whole province but the curve grows despite our efforts. The pressure of public opinion and the fear of litigation act as feeders. I don't want to be a bad prophet but I have the impression that there is nothing more to be done ”.

Domenico Di Lallo, from ASP, comments on the latest data: “In Lazio the increase is one point per year. We must no longer delude ourselves. In 10 years almost all women will give birth in the operating room ".

our city IN COUNTERTEND - Surprise: in our city the caesarean deliveries are slightly decreasing. According to data from the Health Department, from 28,4% in 2005 to 28,15% in 2008. For gynecologists, there are two reasons for the reversal of the trend, writes the Corriere - ed. our city.

"For a start in the last four years the part refund rates with scalpels they are no longer superior to those of natural births - says Enrico Ferrazzi, head of gynecology and obstetrics at Buzzi who, with 23%, is among the hospitals in our city with the lowest rate of caesareans -. A pioneering measure in Del Paese to eliminate any tendency of doctors to favor the most remunerated type of birth, even when the intervention is not strictly necessary ".

Luigi Frigerio, head of gynecology and obstetrics at the Riuniti hospitals of the city continues: "From 2007 to 2008 we reduced the caesarean section by three percentage points from 24 to 21%, thanks above all to the ever-widening offer of epidural anesthesia: today one in three women choose it at the Riuniti. "

Luigi Fedele, head of the maternal and child department of , hospital for 7 thousand births a year, concludes: "The cesarean is often requested by future mothers, sometimes conditioned by doctors who consider it a convenience for both, especially in birth points with few births. per year and without gynecologists on guard at night. But if there are no medical complications, neither for the woman nor for the unborn child, the spontaneous one is the solution that guarantees a better recovery after childbirth, with the possibility of having another child immediately. Scheduled caesareans, then, before the 39th week can also create some problems for the newborn, especially of the respiratory type, ed. "

THE CHOICE OF VIPs

The last to choose the caesarean section among the VIPs was Rachida Dati, the French Keeper of Seals, who gave birth to little Zohra on January 2nd.

But the list of celebrities who prefer the scalpel to natural childbirth is really long. L'ex Spice victoria beckham he had a caesarean for all three children. Same choice for singers Britney Spears, For Celine Dion e Cristina Aguilera. Also Madonna he chose the caesarean for his second son Rocco. Angelina Jolie he had a caesarean for both the twins and his daughter Shiloh Nouvel.

TAG:
New test to identify the brain alterations of those with Down's Syndrome ❯