Ninth month of pregnancy, how to deal with it 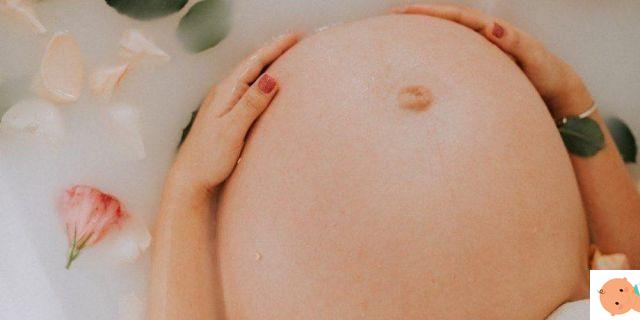 Here we are, moms! It is finally time for the ninth month of pregnancy: the countdown to hug your baby boy or girl in your arms has officially begun. And it is useless to deny that, despite being the last, it will seem the slowest and longest of all months. The desire to get to know the baby is very strong and you will be impatient. Courage: very little is missing. Let's see what happens in these final 4 weeks, day more, day less.

Ninth month of pregnancy: how many weeks it corresponds to

The last month of gestation ranges from 35 + 1 (35 weeks and one day) to 40 + 0 (40 weeks). This is considered the "natural" end of a pregnancy. Starting from the first day of the last menstruation, 280 days pass, that is 9 months and 10 days. Often it goes far beyond this milestone. A baby is considered full term at 37 weeks. From this week onwards, the newborn almost certainly does not need special assistance.

Ninth month of pregnancy: what happens to the mother

The joy of birth, mixed with the anxiety of childbirth, is the feeling that prevails in practically every woman who reaches the end of the journey of pregnancy. Especially if you are at the first, the emotions are strong and must be lived intensely so as not to lose even a minimum detail of what you are experiencing.

You should have gained between 9 and 12 pounds. Obviously it is only an average, the increase considered ideal. On the other hand, there are those who accumulate less weight, for example because they had problems with nausea and vomiting in the first trimester, and who more. Much also depends on one's constitution and, more generally, on the starting weight at the beginning of gestation.

From a physical point of view, fatigue makes itself felt. The extra pounds obviously play a role, as does the baby bump. It's beautiful, but it involves slower, more awkward movements. Despite the fatigue, you shouldn't give up on moving. Of course, no marathon preparations, but a walk is ideal to feel better, as well as to release some physiological tension. When the fetus begins to "go down" to channel, you should breathe a little better because the pressure on the diaphragm is reduced.

The time remaining until the birth will be used to define all the last details: arrange the suitcase, decide who the eldest child remains with when you go to the hospital, organize something for when you return home and so on. You should also try to rest as much as possible. A rather demanding test awaits you.

You will see the gynecologist or midwife on a regular basis to check that everything is proceeding normally. Furthermore, the meeting serves to dispel any "last minute" doubts and the normal fears that accompany you.

Ninth month of pregnancy: what happens to the baby

Ready to come into the world! By now the puppy is fully formed. At birth, its length will be approximately 50 centimeters per 3 kilos of weight. Warning: these are only estimates. No one will ever be able to give the certainty of the measurements that the newborn will have. There are parameters to follow, but you will have security only after it is born. Obviously it also depends on the week in which you give birth: the growth is constant, even if slower than the rest of the pregnancy, and lasts until the end.

As we have already said, for example in the previous post on the eighth month of pregnancy, what continues to grow is the brain. Development continues even after childbirth, which is why the bones of the skull do not weld immediately, as well as to facilitate the descent into the birth canal.

The body is more "chubby" due to the accumulation of subcutaneous fat, the skin is rosy and less wrinkled. It is always covered with vernix, a substance that has protected it from amniotic fluid all these weeks. By the way: did you know that amniotic fluid regenerates itself every 3 hours?

Clearly the fetus has less space. Its movements, however, must be perceived regularly, at least 10 times in 24 hours. Meconium has formed in her intestine, the first stool she will pass after giving birth. Do not worry if they are very dark and sticky: it is absolutely normal that they are like this. If he is not yet upside down (cephalic position) the hopes that he will turn at the last moment are reduced, but they are still there.

Ninth month of pregnancy: the most common symptoms

Ninth month of pregnancy: the exams

• blood collection with complete blood count (including hepatitis B and C and HIV controls).

• Group B beta-haemolytic streptococcus (at 36-37 weeks).

If the pregnancy continues beyond 41 weeks, the following are expected:

Let's spend two more words for vaginal and rectal swabs for the search for streptococcus, a bacterium that does not give symptoms, but can be dangerous because it could cause rupture of the membranes and, at the time of delivery, infect the baby. If the test is positive, antibiotic therapy will be given during labor. In short, you don't have to worry, but the exam is useful.

Labor: the signs that anticipate it

Fear is the same for all women: how will I know that labor is starting? Will there not be the risk that I do not notice and give birth at home or, worse, in the car? The times and methods of labor are different for each pregnant woman. This is demonstrated by the stories that are heard, ranging from endless travails of "40 hours" to other "flashes" of a couple of hours.

The onset of active labor can be preceded by some "alarm bells":

When to go to the hospital

Although the timing of labor is subjective, in some circumstances you shouldn't waste time and go to the hospital:

The breaking of the waters may not necessarily be accompanied by contractions, but you have to go to the place you have chosen to give birth in any case. A baby can't go too long without amniotic fluid. Doctors will then see what to do. For example, if labor does not start on its own they could induce delivery or, if there is fetal distress, proceed with a cesarean.

Induced childbirth: what it is and when it is done

For these scientific societies, there are three reasons for inducing childbirth:

Generally, the techniques used involve the administration of prostaglandins or oxytocin or the placement of the Foley catheter, a kind of balloon inserted into the vagina.

During the ninth month you should not have sexual intercourse

What the logic behind this statement is is difficult to understand. Unless there are precise indications from the gynecologist, sex is not forbidden in pregnancy. Indeed, when it is at the end, it can be a "holy hand" to start labor. In fact, sperm naturally contains prostaglandins which, as we have seen, are also used for the induction of childbirth.

If your breasts don't produce colostrum in pregnancy, you won't have milk

Very false. It is absolutely not certain that if during gestation no drops of colostrum are seen from the nipples, there will be problems with breastfeeding. The best way is to encourage the early latch of the newborn baby and let him suck whenever he wants. Only this is the true recipe for successful breastfeeding.

The low belly indicates that delivery is near

This belief is similar to the belief that the shape of the baby bump changes according to the sex of the unborn baby. In reality, the belly does not go down near the birth. It can be a feeling from mom once the little one starts channeling.

Whoever does a caesarean does not breastfeed

That's not true at all. The chances of breastfeeding are the same, they do not depend on how you give birth. The only important precaution is to attach the baby to the breast as soon as possible, compatibly with the procedures related to birth, whether natural or caesarean.

The XNUMXth week of pregnancy officially welcomes the ninth month! Don't get too tired, moms, and take care of your pelvic floor. Begin the perineal massage with a specific oil: you will avoid excessive lacerations. The baby begins to descend, freeing the diaphragm. You can breathe better!

The thirty-sixth week of pregnancy

If you think that by the XNUMXth week of pregnancy you have finished gaining weight, you are wrong. You could practically gain weight until delivery. It is therefore very important not to overdo it, but to always follow good rules at the table. The baby's skin is pink and soft.

The thirty-seventh week of pregnancy

At the thirty-seventh week of pregnancy, the baby is considered to be at full term. Should he be born now he should not have any particular problems. At this time everyone will begin to "torment you": but why is he not yet born? Patiently explain that only 5% of births occur at the estimated delivery date.

Watch out for the messages that the body sends at the thirty-eighth week of pregnancy. This is especially true for contractions, but you know it by now. If they are insistent, take a hot shower: if they don't pass, maybe you are there. The baby is very ready! Its development is considered by doctors to be complete.

The thirty-ninth week of pregnancy

Thirty-ninth week of pregnancy could be the last! Another effort and you are almost there. The wait is unnerving, we know. Try to get a little distracted to kill time. Do you know one of the first things to do after giving birth? Cut your nails small: they are long and sharp. Pay attention to the number of fetal movements.

The fortieth week of pregnancy

Moms, we can only hope that the fortieth week of pregnancy is the last with a baby bump! You will surely miss him, but you will have the most important love of your life in your arms. The growth of the child is perfect. Now he is just waiting for the big day and the most exciting meeting of his life. Best wishes!

add a comment of Ninth month of pregnancy, how to deal with it