Nipple shields: when they are really needed and how to use them correctly 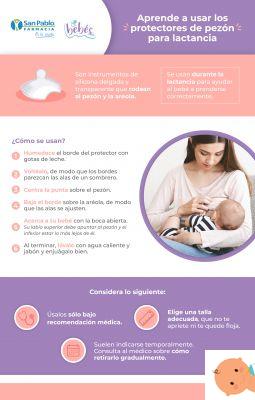 Nipple shields are small devices that simulate the shape of the nipples and can be applied to the nipples itself to facilitate breastfeeding in the presence of certain complications. Sometimes, however, they are used improperly, with the risk of adverse or counterproductive effects.

The topic of nipple shields is still debated from a scientific point of view, but we try to make as much clarity as possible on their use, on the situations and conditions in which they can be really useful and on the possible disadvantages with the help of Chiara Losa, pediatric nurse and IBCLC breastfeeding consultant, creator and contact person of the breastfeeding clinic of the Buzzi Hospital in our city.

Nipple shields, what they are and how they are made

They are devices of different materials - the most common and advisable are those in silicone, but they still exist in rubber - which are applied to the nipples with the aim of facilitating breastfeeding.


“Let's say right away that, like all instruments, nipple shields can have advantages but also disadvantages, especially if used improperly ”warns Losa. “For this, the fundamental advice is use them under the supervision of an experienced operator, not alone 'because a friend or my mother-in-law told me', and basically for a short time ”says Losa.

How to choose the nipple shield

there different types of nipple shields, starting from the material they are made of. “The most suitable are those in silicone, because they are thinner and allow a good adaptability to the mother's breast, without impeding the sensory stimulation of the breast which is the basis of milk production ”explains the expert.

Also shape and size may be different: the tip, for example, can be more conical or more rounded (icing), so you have to choose according to the characteristics of the mother and child. "On the one hand, the nipple shields must adhere well to the breast without being too tight at the base, but on the other hand they should not be too long or too short in relation to the baby's mouth".

“To evaluate the 'child side' you have to put your index finger in his mouth with the fingertip pointing upwards to the junction between the hard and soft palate, at this point making a mark on the finger where it touches the upper lip. The distance between the tip of the finger and the mark represents the size of the child's mouth, on the basis of which to choose the nipple shield ". Typically, this distance is two cm, but it can be a few millimeters shorter or longer.

Once the size has been established based on the baby's mouth, however, it is necessary to check that the nipple shield also adapts well to the characteristics of the mother's breast: the shorter nipple shields generally also have a narrower base, so they may not fit if the base of the maternal nipple is very large (risk of injury). "In these cases a compromise must be sought" advises Losa.

Read also: Breastfeeding: your questions and the answers of the experts

How to apply the nipple shields

To facilitate the adherence of the silicone nipple shields, a suggestion is to put them in hot water for a few minutes before applying them: "In this way the side flaps become more elastic and the nipple shield easier to apply".

“In practice, to wear them you have to pull the flaps sideways with your thumbs, pushing the central part outwards until it almost overturns it. At this point the central part is placed on the nipple and the flaps are released, which should adhere well, creating a small vacuum ".

If the nipple shields are applied well, they remain well adhered and you do not need to hold them with your hands while latching on the baby, so you can focus on the latch, which is essential for breastfeeding, and to stimulate good milk production. , both to reduce the risk of the formation of lesions (fissures) to the mother.

Read also: Breastfeeding, how to get started right

“The silicone nipple shields have to be applied only for the duration of the feed, and removed when the feeding ends, ”explains Losa. After each use they go wash well with warm water and detergent and sterilize at least once a day: any common sterilization method is fine.

When can they be used

Sometimes the nipple shields are purchased even before the baby is born, or as soon as you come home from the hospital, perhaps because someone told the mother that they are a fundamental accessory. “They really shouldn't be used in DIY mode, because they can have major disadvantages,” says Losa, noting that there are limited cases of documented effectiveness of using nipple shields. Here they are:

According to Losa, it is important to underline that due to the contraindications, the use of the nipple shield should be considered a last resort when other attempts have failed and should in any case be temporary: a transition bridge compared to breastfeeding without devices.

Can the nipple shield be useful when the child has teeth and is nibbling?

"No, in general it is not indicated in these cases," says Losa. “Usually, even when a baby has teeth, she doesn't hurt her mother, because she 'covers' her teeth with her tongue when she sucks. Sometimes it can happen that you nibble during teething if you are bothered and very nervous. In these cases it may be helpful to apply something fresh on the gums before feeding, but even in these cases the nipple shield is not needed ”.

Can the nipple shield be used in case of fissures?

"It is not the first strategy to be implemented in the presence of fissures" explains Losa, underlining that it can also be contraindicated in these situations. "The nipple shield should fit snugly, but that means it could tighten right where the crack is, increasing the pain."

Still, many moms report experiencing pain relief by wearing it. How can this happen? “It can happen because the baby latches on in an extremely superficial way. In practice, the mother does not feel pain because the baby is not sucking or is sucking very little and the result is that after a few days it turns out that she has not grown ".

The disadvantages are that sometimes, in the presence of a nipple shield, the baby does not latch on properly. “The attachment can become a little more superficial and central, there is a risk that the baby will only take the silicone teat and therefore only the nipple, and when this happens, the possibility of fissures forming increases” explains Losa. "Furthermore, the incorrect attachment can lead on the one hand to the risk of traffic jams, which could be followed by mastitis or abscesses, and on the other hand to a progressive reduction in milk production." “Not surprisingly, the use of nipple shields is often associated with a mixed breastfeeding: there are very few exclusive breastfeeding at six months when using this tool ".

Other times it can happen that babies get so used to sucking from the nipple shield that they can no longer breastfeed, with the opposite result to that for which this device was used, which was to facilitate breastfeeding.

“This is why the nipple shields should not be demonized, but considered transitory tools in the context of a path in which the mother is supported by an expert breastfeeding operator” concludes Losa.

Many mothers use silver nipple shields (obviously more expensive than others) to control breast pain, for example due to a fissure. “The use in this case is different from that of silicone nipple shields, because they are closed devices, such as caps, which are applied not for feeding but at other times of the day” explains Losa.

The idea is that they can give relief because of the anti-inflammatory and antibacterial effects of silver, as well as for the fact of removing the possibly irritated skin from the tissues that could give further discomfort. “In reality, there are no valid and solid scientific studies that really prove a reduction in the pain of fissures following the application of these nipple shields, also because it is very difficult to do them” explains Losa. "Under the nipple shield, in fact, it is inevitable that a few drops of milk accumulate, which in turn has a recognized antibacterial, antifungal and anti-inflammatory action".

“Of course, the cold of this silver 'hat' may give momentary relief, and there is nothing wrong with keeping it a few minutes a day or a day every now and then, but continued use could be counterproductive. For example, it could promote a candida infection and the fissure itself, kept indoors for a long time in a humid environment, risks worsening rather than resolving ".

TAG:
Paracetamol in pregnancy: is it true that it is bad for male fetuses? ❯

add a comment of Nipple shields: when they are really needed and how to use them correctly