Nosebleed in the child, what to do 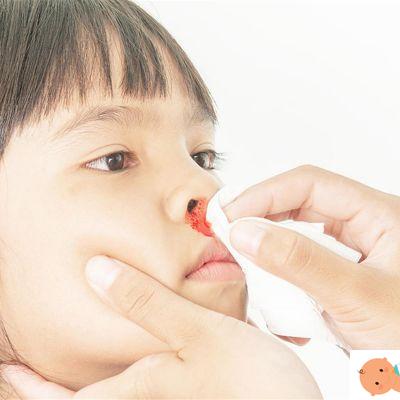 Nosebleed or, in medical jargon, epistaxis: it can happen at all ages, but especially in childhood, especially between two and ten years. In the vast majority of cases it is a absolutely benign event, which leaves no consequence. Only in rare cases can it depend on more serious conditions, such as a trauma to the nose or face, the insertion of a foreign body in the nose, a coagulation disease.

Read also: Head trauma, what to do if the baby hits his head

"The epistaxis is usually due to a major fragility of the nasal mucous membranes, on which many small superficial capillaries flow which, if stressed, can break "he explains Arthur Sorbo, otolaryngologist at the large metropolitan hospital of Reggio Calabria. "It can occur if you blow your nose more vigorously, or because of the habit that children often have of picking the nose or for other small traumatic events that can involve the area anterior to the nasal septum" says the specialist.

"Then there are some factors that can promote nosebleeds: in winter, for example, staying in hot and dry environments it dries the mucous membranes and dilates the capillaries, increasing the risk of rupture. Ditto in summer, when exposure to the sun accentuates vasodilation. For those suffering from allergic rhinitis, however, a season at risk is spring, since the mucous membranes are subjected to irritative stimuli and one is prone to sneeze or blow the nose more frequently ".

Of course, colds also increase the risk of nosebleeds.

What to do in case of a nosebleed? "First of all keep calm and reassure the child"suggests the otorino:" If you shake, in fact, it does nothing but increase the pressure in the nose, accentuating the outflow of blood ".

Then: make the child lean forward slightly to clear the airways and immediately after keep the nostrils pressed between the index finger and thumb for a few minutes. The pressure creates a vasospasm which causes the bleeding to stop.

According to the website HealthyChildren, of the American Association of Pediatricians, the pressure should be exerted for about ten minutes: during this period it is better not to check if the nose has stopped bleeding, because you risk restarting a flow that was stopping. If after ten minutes the epistaxis has not stopped, the pressure should be repeated for another 10 minutes. If it persists even after this time, contact the pediatrician.

Even rinsing the nose with cold water or bringing an ice cube wrapped in a handkerchief to the nostril - advises the specialist - can help stop the bleeding or reduce the risk of it recurring after it has stopped.

The closure of the capillary

If the problem is a capillary that struggles to heal and causes repeated bleeding, it can be permanently closed with the caustication. "In the pediatric age, the most used technique is touching with a hemostatic 'pencil' of silver nitrate" Sorbo points out. "It is an absolutely painless practice, which is done on an outpatient basis and lasts a few minutes".

If the problem is the dryness of the rooms, in winter, it is advisable to use a humidifier, especially in the bedroom. Nasal washes with saline solution could also be useful in children particularly prone to the phenomenon, to keep the nasal cavities moist and clean.

As also recommended by the website of the Bambino Gesù Children's Hospital of the city, as a prevention in critical periods you can take - obviously under medical supervision, avoid doing it yourself! - products based on vitamin C or K or apply one special ointment to strengthen the capillary wall. "There are, for example, arnica, which has a restorative and restorative action, and blueberry, which has a capillary protective action" advises Sorbo.

After bleeding, to prevent the phenomenon from happening again, it is better to ask the child to do not blow your nose vigorously and don't pick your nose (in any case, it is a good idea to always keep the child's nails short and clean). Better to avoid too very intense efforts.


Best to avoid tilt your head back, because in this way the child swallows or inhales the blood and this can cause breathing difficulties and cause him to cough or vomit, increasing the bleeding.

Better to avoid the hemostatic cotton, because it has a damaging action on the nasal mucosa. In general, it is preferable not to insert anything into the nostril that is bleeding, but in some cases the doctor may recommend the use of a cloth soaked in an anti-bleeding solution to buy at the pharmacy.

If it happens often

If the nosebleed occurs very frequently, it is advisable to contact the pediatrician, who will prescribe some haematological tests to rule out that there are problems with cblood clotting. But it is a small minority of cases: in general it is only a local phenomenon, which does not cause any concern.

Other sources for this article: information page of the English Health Service; MedScape information material

Read also: Hemophilia, everything you need to know

What is the cause of the epistaxis?

Epistaxis is generally due to a greater fragility of the nasal mucosa, on which many small superficial capillaries flow which, if stressed, can break.

What to do if the child loses a nosebleed?

First of all, keep calm and reassure the child. Then have the child lean forward slightly to clear the airways and immediately afterwards keep the nostrils pressed between the index finger and thumb for a few minutes.

What to do if the child always loses a nosebleed?

If the epistaxis occurs very frequently, it is advisable to contact the pediatrician, who will prescribe hematological tests. In general, this is just a phenomenon that does not cause any concern.

TAG:
Blood in the stool of the newborn: when to worry? ❯

add a comment of Nosebleed in the child, what to do