Nursery, grandparents or babysitter: who to leave the baby to? 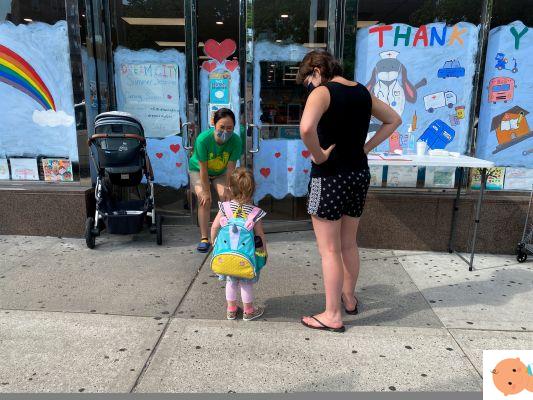 Nursery, grandparents or babysitter: here are the three possibilities that present themselves to the family when the mother returns to work (honestly, on these occasions, on these occasions we always and only talk about mothers, but this is the reality of Del Paesena. Extended parental leave for fathers is a utopia).

Each solution can have advantages and disadvantages. Let's see the main ones also with the help of the Milanese pedagogist Monica Castagnetti, trainer of the Trieste Child Health Center. Which she immediately clarifies her thought: "In the best of all possible worlds, the child and his needs should be placed at the center of the choice, which include being in a environment rich in relationships, even with other children ".

Leave the child in the nursery

For Castagnetti the main benefit of choosing the nest lies in the fact of become part of a community of relationships which includes not only adults and children of various ages, but also his child peers, that is, small children like him. "And beware that contrary to popular belief this is also important for very small children, not just for children who are starting to be two or three years old".

"There is the idea - continues the pedagogist - that the small child lives only in the relationship with the adult (therefore the parents, the grandparents, the educators ...) but this is not the case: he also lives in the relationship with peers. is exactly he learns a lot from this relationship, even when there seems to be no interaction. In the presence of another child of the same age, a baby of a few months is led to enter into a relationship, in a certain sense to 'come out of himself' - with a verse, a look, an attempt to move in space - because the other is someone really interesting and curious. He is another equal, who likes the same games (even if it involves sucking a rattle all day), which adults obviously don't care about. "

According to Castagnetti, in short, having small children around allows a baby to acquire a wider range of experiences than those he would have by being alone with adults, to build a small piece of sociality that would otherwise be impossible.

Other advantages lie in the fact thatand the parents find themselves within a community, to which they can turn for example in times of difficulty. "It is very useful to be able to compare with parents who are living the same experiences and often starting from the nursery solid friendships are built not only between children but also between families ". And if there is any doubt to be clarified, it is possible ask the educator. Sometimes the nests themselves organize moments of meeting with parents to address particular issues of a child's growth. Of course, the presupposition of all this is that we are talking about quality nurseries and in particular of quality educators, with solid training, attentive and capable of entering into the mother-child relationship with a certain care.

Read also: Nursery, how to choose it

The first disadvantage is logistical: the existing nests in Del Paese are not enough to cover the needs of the population (despite the massive decline in births in recent years). Especially in the South, the possibility of accessing a nest is almost nil.

Also where they are present, moreover, often the nests are very expensive and this limits the possibility of access for many families. It is true that in many cases they are foreseen bonus for the frequency of educational services, even at a regional level, but these bonuses are often reserved for parents with "traditional", dependent work, while parents with atypical contracts or VAT numbers are excluded, as they would also need it.

Another limitation concerns the fact that entry into a community by a still young child, with an immune system not yet fully mature, opens the way to the risk, so to speak "physiological", that the child often falls ill. When this happens it may then become necessary to find a person to take care of him on the days he stays at home.

Read also: Against educational poverty: the importance of "care" for small children

There are basically two: the considerable economic savings and the fact that, on an emotional level, the baby's mother can feel them - and this is particularly true for her own parents - more like and trustworthy than a stranger such as a nanny could be. .

It lacks that community aspect of which we talked about the nursery. "It is difficult for grandparents to take care of more than one / two grandchildren at a time. Even if there are several cousins, families tend not to entrust them all together to their grandparents so as not to burden them too much" comments Castagnetti. Of course, it is a limit that could be exceeded if grandparents brought their grandchildren in contact with other children of the same age, in playrooms, small workshops or other centers for children. But even these are not very widespread, especially outside the big cities and in the South.

Also to be taken into account old discontent related to the relationship between the child's parents and their own parents (which can trigger emotional reactions also painful) or new moods related to diversity of educational style. "You can also try to clarify some things that the parents of the child consider fundamental, but it is impossible for the grandparents to be able to change their educational style" says Castagnetti. What to do, then, in these cases? "Trust the child"the pedagogist replies without hesitation." The child notices the differences and if his parents' educational style works, it is effective, he himself will ask his grandparents for some changes: for example, the grandmother to be less apprehensive while they are in the park ".

Read also: 10 golden rules to be a good grandparent

It can be a valid alternative to grandparents or the nursery if these for various reasons are not available or accessible.

Obviously the cost, but also - as in the case of grandparents - the fact that the child's relationship with a peer group is missing. Unless it's a tagesmutter. Furthermore, since the relationship with parents is a working relationship, it is often conditioned by the fact that mom and dad think they should expect exactly what they are asking (or imagining). Even the nanny, however, will have her own educational style and a minimum of diversity must be taken into account anyway.

"The situation changes if you do not think of the nanny for an eight-hour-a-day service but maybe a couple of hours, waiting for the mother or father to return after the child has been in an educational service. In this case the limits are blurred "says Castagnetti.

Read also: Baby sitter: all the ways to understand if he is capable TAG:
No mushrooms in pregnancy and children under 12 ❯

add a comment of Nursery, grandparents or babysitter: who to leave the baby to?