Oral microbiota: what is it and why is it so important? 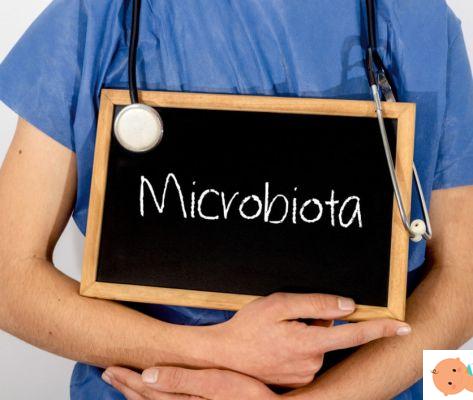 Respiratory infections are a very common problem in children, especially during the first years of life. It is therefore easy for children to be sick every other week while they go to kindergarten! The cause is essentially attributable to one incomplete maturation of their immune systems, but the susceptibility to infections is also linked to the composition of the microbiota that is, the set of bacteria that populate the organism.

Il oral microbiota, in particular, it plays a very important role in the prevention of airway infections because it represents the first line of defense against viruses and bacteria. Let's find out more about the oral microbiota and how to keep it in perfect balance.

The oral microbiota is the set of all microorganisms (mainly bacteria) living in the oral cavity and has a very important function for the health of children and adults. The oral microbiota, in fact, is the first point of contact with everything we ingest and breathe. His role is a bit like that of a sentry who has to defend the body from the attack of pathogenic viruses and bacteria that try to reach the airways and can cause an infection.

The oral microbiota, however, can only defend our body when it is in balance, that is when there are more good bacteria than bad ones.

What happens if the microbiota is out of balance?

If the oral microbiota is not in equilibrium, it means the bacteria present are mostly bad and therefore I am faced with a oral dysbiosis. The consequence is that the "defense line"which should protect young and old from the attack of viruses and bacteria is weakened.

If "bad" viruses and bacteria can move more freely, the risk of inflammation and infections pharynx, tonsils and larynx. But not only!

According to a study published in the Journal of Oral Science, i pathogenic bacteria present in the oral cavity can also cause:

Furthermore, the oral microbiota also affects the microbiota of neighboring districts such as lung disease, and can involve the ears causing otitis media, a very common infection in children.

The positive thing is that the oral microbiota can be modified and it can be helped to remain in a state of equilibrium.

Oral microbiota: how to take care of it

We understand that, for both adults and children, having a healthy and well balanced oral microbiota it is essential to prevent the onset of pathologies of the oropharyngeal cavity.

But what to do then to "protect" the oral microbiota?

The first rule for taking care of the oral microbiota is adopt a healthy lifestyle, following a varied diet rich in vegetables, fruit, legumes and whole foods! Instead, it is better to avoid, at least as much as possible, foods loaded with sugar that facilitate the accumulation of bacterial plaque and affect the pH of the oral cavity.

Another good way to keep the oral microbiota in balance is to take supplements based on probiotics.

According to the definition of the World Health Organization, a probiotic is "a microorganism administered live, with the ability to improve human health through interactions with the host, if taken in adequate quantities". They are therefore microorganisms that live with us and interact with our body, producing substances that are very important for our immune defenses.

Probiotics and oral microbiota: the benefits for children

Probiotics have numerous benefits on the health of the whole body and can also prove to be of great help for all those children who spend autumn and winter always sick. According to a study by the Tor Vergata University of the city and the University of the city, in fact, the intake of probiotics would be particularly useful for prevent and reduce infections of the mouth and respiratory tract such as pharyngitis, tonsillitis and laryngitis.

The best results were obtained with the probiotic strain K12 belonging to the family of Streptococcus salivarius which, as we have seen above, are essential for the balance of the oral microbiota.

Streptococcus salivarius K12 is famous for being isolated for the first time about 30 years ago from the mouth of a 5-year-old New Zealand boy who, compared to his peers, he had never gotten sick of pharyngitis, tonsillitis and otitis media. Over the years, several laboratory studies have observed the behavior of S. salivarius and it has emerged that the presence of this strain within the oral cavity limits the growth of other pathogenic bacteria which cause airway infections such as pharyngitis and tonsillitis.

A research team from the city's Bambino Gesù Pediatric Hospital in 2022 launched a pilot study to evaluate the effectiveness of the K12 strain in preventing recurrent episodes of pharyngitis and tonsillitis in children, and the results confirmed expectations. Streptococcus salivarius K12 is really useful for keep the oral microbiota of the whole family in perfect balance and to prevent and reduce pharyngo-tonsillar infections, thus limiting the use of drugs (antibiotics).

Read also: Recurrent respiratory infections: when the child is always sick TAG:
Honey for babies: properties, benefits, risks, since when it can be given ❯

add a comment of Oral microbiota: what is it and why is it so important?