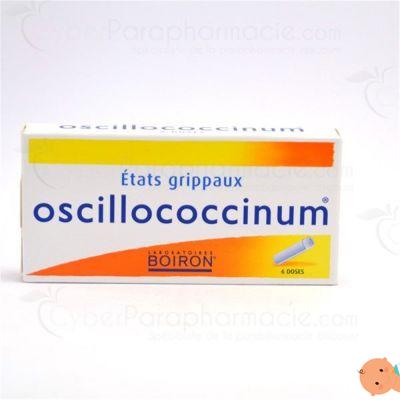 Have you ever heard of Oscillococcinum? It is a homeopathic preparation which, according to the manufacturer, would be used to prevent and treat the flu. In our country this product is very successful and some even call it a homeopathic "vaccine". Oscillococcinum is sold in the form of simple sugary-flavored candies and it is used above all by mothers and fathers to prevent and treat the seasonal ailments of their children.

Since this is a homeopathic remedy, however, opinions differ. On the one hand there are those who argue that it does not bring any benefit, and is therefore a useless waste of money, and on the other hand those who say that it really works against the flu. Why is its effectiveness so much debated? Let's try to see ourselves clearly once and for all thanks to the help of dr. Alberto Ferrando, family pediatrician and president of the Ligurian pediatricians association.

Oscillococcinum: what is it?

Oscillococcinum is a very famous homeopathic preparation which is used to prevent and treat seasonal flu and flu-like syndromes. It is sold in the form of small blood cells with a sugary flavor and can be used by both adults and children. Oscillococcinum is usually recommended in case of:

In short, all the typical symptoms of seasonal ailments. Parents who have tried it are thrilled and children do not have a tantrum to take this homeopathic remedy.

Dosage: how to use Oscillococcinum

As we have just seen, Oscillococcinum can be used both to prevent the flu and to treat it, only the dosages. In the package insert it is recommended to take:

Each sachet contains a globule to dissolve under the tongue. The intake must take place between meals.

Oscillococcinum is a safe product with no side effects, but care must be taken because in addition to the active ingredient, which we will discuss shortly, there are also lactose and sucrose (sugars). People allergic to these ingredients should not use Oscillococcinum.

Now it remains only to understand what this homeopathic remedy contains and if it really works as claimed by many people.

History of a bacterium that never existed

To find out what Oscillococcinum contains, we must first retrace its history. So let's take a little leap into the past.

In 1925 French physiologist Joseph Roy was studying the blood of flu patients when he observed gods small rounded corpuscles that moved. The doctor then thought he had discovered a new bacterium which he called Oscillococcinum (oscillating spheres).

Roy he repeated the remarks also for other diseases and discovered that Oscillococcinum was everywhere, even in tumors, so much so that he came to think that the cause of every disease was this strange bacterium. After observing the tissues of various animals, Roy concluded that there were very high concentrations of them in the heart and liver of the musk duck. The doctor then prepared some vaccines containing the bacterium with the aim of curing diseases, but his attempts were in vain. The cause? There was no bacterium. The small oscillating corpuscles were gods tiny air bubbles formed due to incorrect preparation of the slides.

The story of the mysterious bubbles inspired Oscillococcinum, one of the currently best-selling homeopathic preparations for preventing and treating the flu. But if the bacterium does not exist, then what does the product we buy at the pharmacy contain?

If we read on the back of the package we find: "1 dose contains 1 g of blood cells of Anas Barbariae, Hepatis and Cordis extractum 200 K", or musk duck heart and liver extract. However, this active principle, which would make the homeopathic remedy effective, does not exist in the scientific literature.

200 Kinstead, it indicates the number of dilutions made to obtain the product. According to homeopathy, in fact, a preparation is all the more powerful the more it is diluted and in the case of Oscillococcinum it is an extremely diluted product.

Regarding the dilutions, however, the scientific community has expressed itself very clearly: "after the 200 dilutions nothing remains - explains the pediatrician Alberto Ferrando - the active principle is no longer there. "According to the laws of chemistry it has been shown that a 12 K preparation (therefore much less than 200 K) no longer contains any active principle.

At this point, what is left then in the homeopathic remedy? As indicated on the back of the package, and as mentioned above, "this preparation also contains auxiliary substances: sucrose and lactose ". Here is what remains to compose the small globules of Oscillococcinum: XNUMX/XNUMX cup sugar. Indeed, as stated in the package, each Oscillococcinum granule weighs 1 gram and contains exactly 1 gram of sugar inside.

Yet some parents argue that the homeopathic preparation works great on their children. Does that mean it really has any properties or is it a simple placebo effect?

We come to the focus of the question. In fact, many wonder if this homeopathic remedy really works to prevent and treat the flu. The independent scientific studies that have investigated the effects of Oscillococcinum speak for themselves: the homeopathic preparation is of little use and at most has a placebo effect.

In a study published in 2007 in the scientific journal The American Journal of Medicine, some homeopathic remedies for the treatment of seasonal flu were analyzed, including Oscillococcinum, and it emerged that these alternative therapies are not effective. A review of the scientific literature published in the Cochrane Library also confirmed that there is no evidence that Oscillococcinum is useful for preventing or treating influenza or flu-like syndromes.

However, the fact remains that many people claim that Oscillococcinum is effective, how is it possible if it is candy made of sugar? "Sometimes some products without therapeutic efficacy they can still bring gods benefits to the single person - replies Dr. Ferrando - because even the very idea of ​​taking something has an influence on the organism ".

To this motivation we must also add another one, linked to the very characteristics of influenza and para-influenza syndromes. THE seasonal ailments caused by viruses tend to go away on their own within a week and stronger symptoms such as fever subside after the first few 2 3-days. This is why those who take Oscillococcinum think it is effective. In reality it is only the natural course of the disease.

"If a parent tells me that their baby did not have the flu after he took Oscillococcinum, I can only tell him that we don't have the time machine to see what would have happened if he hadn't, it probably would have been. all the same ", explains Ferrando. "If the idea of ​​taking something makes the calmer parents they can do it, but without expecting anything - continues the pediatrician - and always remembering that homeopathy should only be used in situations where there is no risk to the baby, as in the case of a slight flu that would heal on its own anyway. "

Homeopathy does not replace traditional medicine

In any case, homeopathy should never replace traditional medicine, but at most complement it. Also because currently, according to the Agenzia Del Paesena del Farmaco, no homeopathic medicine on the market has clinical studies that support therapeutic indications. "For more important and potentially risky situations we must consider homeopathy as a" supportive "therapy, without however missing the therapy whose effectiveness is proven. In some cases it is therefore necessary to take traditional medicine into consideration to avoid running into much more serious risks ", says Dr. Ferrando.

The important thing, then, is to talk about it with your doctor or pediatrician, avoiding clear-cut positions. "If parents want to follow homeopathy they are free to do so, discussing with the pediatrician and always bearing in mind that there is no homeopathic or traditional therapy that can make up for it some attention that the parent must have towards the child, namely:

These are the wormand things that contribute to children's health and which cannot be replaced by either a homeopathic preparation or a traditional drug. The drugs come later ", concludes Dr. Ferrando

In conclusion, we can say that at the moment there is no scientific evidence that demonstrates the effectiveness of Oscillococcinum, but we also know that it does not hurt, always remembering that it is a product containing sugar and that the cost of this preparation is not at all. low!

Read also: WHO tips to protect yourself from the flu TAG:
Bones in pregnancy, how to take care of them ❯