Otitis in children: symptoms and remedies 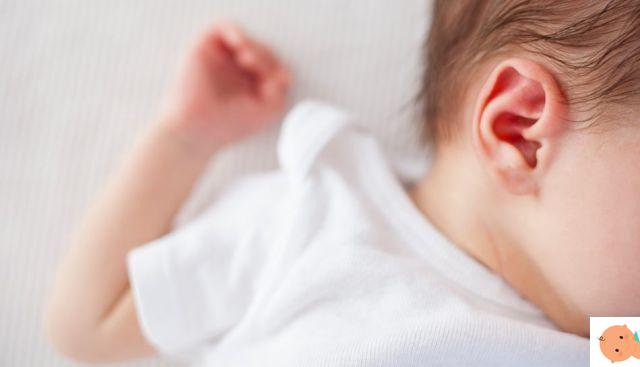 Fonte: shutterstock
Earache it is a very common symptom in children. Of course: after a cold otitis is the most common infectious disease in childhood, as well as one of the most feared by parents. In fact, in the vast majority of cases it is solved without problems. Rarely, however, it can lead to significant complications, such as mastoiditis (infection of a bone, the mastoid process, which is located behind the ear), perforation of the eardrum and impaired hearing. That is why it is good to know what to do when your child complains of earache.

Earache leaves no way out: the pain caused by otitis is probably the strongest that a usually healthy child can experience. Thus, the affected child recognizes it immediately and complains clearly.   If it's still small, instead, he is particularly irritable, has difficulty sleeping or eating or cries in despair (often during the night), putting a hand on his ear or pulling his earlobe. All symptoms that should lead to suspicion of acute otitis.

Otitis is an ear infection often occurring with or following a cold or throat infection. It can be of viral or bacterial origin.

Because it is so common among children

It is widespread in childhood for reasons related to the anatomical characteristics of children. In children, in fact, the Eustachian tube, that is, the canal that connects the throat and the nasal cavities with the ear, is narrower and shorter than in adults and is also more horizontal. For this reason, it is easier for any bacteria or viruses present in the throat or behind the nose due to a common cold to go up it, reaching the so-called middle ear, a small cavity separated from the outside by the eardrum membrane. Once nested in the middle ear, the microbes cause pus to produce, which fills the cavity, stagnates and presses on the eardrum causing a strong pain. If the otitis is particularly severe or is not treated, this pressure can lead to rupture of the tympanic membrane. Result: the child who until then had only a stuffy nose and "snot", but all in all was fine, begins to scream loudly and the rush to the pediatrician is inevitable, even if there is not always a fever. Read also: fever in children

On an individual level, determining which children will be most prone to otitis also come into play immune factors: children with a less efficient immune system (trivially because they are more immature) will be more prone to the disease, especially if they attend daycare or preschool. Bottle-feeding also appears to be a risk factor for the disease.

How is otitis diagnosed?

Only the pediatrician can diagnose with certainty an otitis, because in addition to the clinical symptoms (how is the child) it is also necessary to evaluate the presence of signs of inflammation of the middle ear. Only the professional can do it, because he can see the eardrum with the help of the otoscope, that funnel-shaped instrument with light that he sticks into the child's ear. If the eardrum appears red and inflamed, or even perforated, it means there is otitis.

Some strategies can be useful for the prevention of otitis. In particular:

What should I do in case of otitis?

The guidelines of the Del Paesena Society of Pediatricians (SIP) on acute otitis media provide information on what to do. Of course, even during watchful waiting, it's okay to try to reduce the baby's pain. So you need a pain reliever: first of all paracetamol and, if that doesn't work, ibuprofen.

Antibiotics: judiciously and without fear


Even in the case of otitis, as well as for other infectious diseases of bacterial origin, antibiotics must be used wisely: without exaggerating, because sometimes they are not actually necessary, but without being afraid, because in some circumstances they are very important to stop the 'infection. Always strongly discouraged, however, remembering so-called complementary therapies (such as homeopathy) for the treatment of otitis and, in general, of acute infectious diseases.

In addition to medications, some "home" remedies can relieve a child with ear infections. Here they are:

Complications can occur when the infection spreads to the anatomical structures around the middle ear. They can involve, for example, perforation of the eardrum membrane, mastoiditis, temporary paralysis of the facial nerve, meningitis, encephalitis. It must be said that these are very rare situations, but precisely because they are always possible - and the consequences can then be serious - it is important to intervene with the adequate antibiotic treatment, if the infection does not go away on its own within a couple of days.

But is there a risk of hearing?

Some hearing disturbances may occur during otitis, which fortunately is usually only temporary. In older children, the signs of this disorder may be that the child asks more often than usual "how?", "What?" or asks to keep the volume of the TV or music louder. As for the little ones, it is seen that they do not respond to sounds, or respond less readily. Typically, these disturbances are transient and last a few weeks at the most. If they last longer than a couple of months, however, it is a good idea to have an otolaryngologist examined.   The specialist visit can also be useful if the ear infections recur very often, because then the hearing disorder can become almost a constant. The child spends several weeks a year not fully understanding what parents or preschool educators are saying, which could represent a problem for learning.

Also see the video on acute otitis in young children

TAG:
The eighth month of the newborn ❯

add a comment of Otitis in children: symptoms and remedies