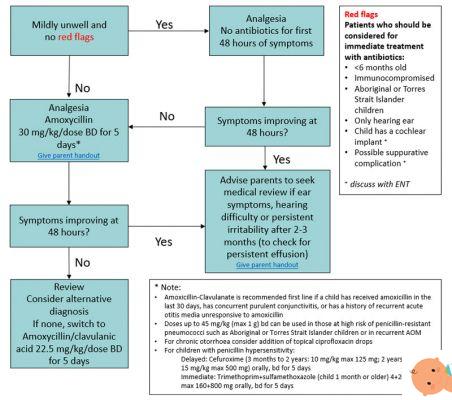 What to do in case of otitis

Otitis, a middle ear infection that can accompany or follow a cold, can be very painful for the baby.

Pain relievers such as acetaminophen or ibuprofen can be given to relieve pain.

There are also medicines in drops to insert into the ear, but be careful: you don't have to never put drops in the ear without the doctor's consent. In fact, if there is a perforation of the eardrum membrane, detectable only with the otoscope, the drops can cause further damage by coming into contact with the structures of the middle ear.

Sometimes, otitis clears up on its own within a few days. Other times it is necessary to use an antibiotic (the first choice is amoxicillin): it is the doctor who decides when to use it, based on various considerations.

Why otitis media or externa?

Otitis media it is an inflammation of the middle ear, or a middle ear infection. It occurs in the area between the tympanic membrane and the inner ear.

The possible complications of otitis

In the vast majority of cases, otitis is a very annoying infection, but without consequences. Sometimes there may be a temporary reduction in hearing: if this lasts more than a few weeks, it is advisable to consult an otolaryngologist.

In very rare cases it can have more serious consequences, such as inflammation of the meninges, mastoiditis (infection of a bone located behind the ear), deafness, which can occur if the infection is very strong and is not recognized and therefore treated in time.

Onion as a natural remedy. Does it really work?

Onion wraps are a traditional home remedy for earache. They are prepared by finely chopping onions and wrapping them in a handkerchief to make a compress on the inflamed ear.

Many people claim to benefit from this remedy, which would reduce inflammation while relieving pain. It must be said however that, according to a document produced by the American National Library of Medicine service that deals with evidence of efficacy at the moment there is not enough scientific data to say whether the remedy really works or not.

TAG:
Otitis in children, how it is treated and how it is prevented ❯

add a comment of Otitis media, therapy and care in children