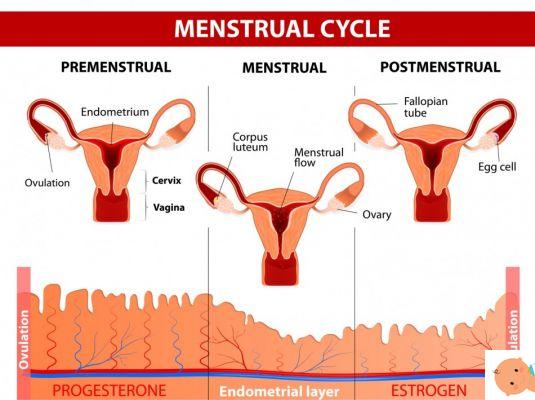 L'ovulation is the phenomenon of release of the egg ready for fertilization in the tuba by the now mature follicle.

It is a phenomenon that occurs at the level ofovary, controlled by the brain, and in particular give hormones secreted by brain structures which constitute the so-called hypothalamus-pituitary axis.

The hormone involved in this process is theLH hormone: when it reaches a peak, you have the maturity end of the follicle, its rupture and the exit of the egg from the ovary into the tube.

Is it possible to know when ovulation is taking place? Some women can tell when, reading the signs sent from your body.

Let's find out together which ones:

Some women especially at one of the ovaries, the one where the follicle that leads to the maturation of the oocyte grows, they perceive a slight pain.

In addition, at this stage the cervical mucus becomes more abundant, but it also changes appearance, making it more transparent, fluid and elastic like the egg white. It is the mucus suitable for facilitating the ascent of spermatozoa.

It may happen that in conjunction with ovulation, you have a baby spotting, some small blood loss.

Many women do not notice that they have ovulation, others feel it with particular intensity, with pains in the lower abdomen and especially in correspondence with one of the ovaries. This is normal, but if the pain is bothersome you can take a pain reliever.

When does ovulation occur and how long it lasts

Ovulation occurs 14 days before of the next menstruation.

When does ovulation last?

Ovulation lasts 24 hours. A woman is already fertile for 3-4 days before, since, when she is about to approach ovulation, the cervix produces a mucus that promotes the survival of spermatozoa.

As you approach menopause your cycles tend to become Shorter and it often happens that ovulation occurs immediately after the end of menstruation, around the 8th -10th day.

In addition to the period of premenopause, a shortening of the cycle and therefore an anticipation of ovulation can also occur in periods of stress.

How to calculate ovulation

Regardless of the symptoms, it can be calculated that ovulation is coming with a simple mathematical method, since 14 days pass between ovulation and the first day of menstruation.

If the menstrual cycle is regular

If the menstrual cycle is irregular

More complicated to calculate ovulation in a irregular cycle: for example, if the cycles are 27-30 days, ovulation will occur between the 13th and 16th day.

Il ovulation monitoring you start a few days earlier than you think theovulation and consists of a series of transvaginal ultrasound within a few days of each other, through which the following are measured:

What are ovulation sticks for?

The sticks for ovulation they are used to identify the days in which you are fertile, as they detect hormonal changes associated with ovulation in the urine, in particular the concentration of LH.

They work like a pregnancy test: they are placed under the stream of urine and the result is read.

NB Keep in mind that a positive test does not indicate that ovulation will occur, since, despite the LH surge, anovulatory cycles (ie without ovulation) are also possible, especially if you are no longer very young.

Chances of getting pregnant with each ovulation

Even if a couple has intercourse on the right days, there is no certainty of getting pregnant right away. Success depends on several factors, such as age, lifestyle, nutrition.

Calculating ovulation: how is it done?