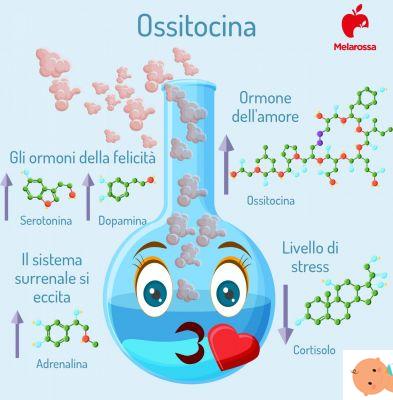 Oxytocin: what it is and what its functions are

L'oxytocin it's a hormone produced byhypothalamus and secreted by the neurohypophysis, which acts mainly on the breast and uterus. During labor and delivery it causes contractions smooth muscle cells of the uterus, favoring the expulsion of the fetus. Let's see in detail what its functions are.

L'oxytocin it is produced by the hypothalamus and is secreted into the bloodstream by the pituitary gland rear. It performs the function of regulating peripheral organs and tissues during the moment of delivery and dell 'nursing, stimulate sexual desire and promote affection and empathy.

What functions does oxytocin perform?

The two main actions of oxytocin in the body are:

Oxytocin stimulates the uterine muscles to contract it also increases the production of prostaglandins, which further increase contractions. The oxytocin produced is sometimes given to induce labor if it has not started naturally or can be used to strengthen contractions to aid delivery. In addition, the oxytocin produced is often administered to speed up the release of the placenta and reduce the risk of heavy bleeding by contracting the uterus.

During breastfeeding, oxytocin promotes the movement of milk into the breast, allowing it to be excreted from the nipple. Oxytocin is also present in men, playing a role in the movement of sperm and in the production of testosterone by the testes.

How does oxytocin affect social behavior?

It's believed that oxytocin also plays an important role in social behavior.
In the brain, oxytocin acts as a chemical messenger and has been shown to be important in certain human behaviors including sexual arousal, recognition, trust, anxiety, and mother-infant bonding. As a result, oxytocin has been called the "love hormone" or "cuddle chemical".
Many research projects have been undertaken, examining the role of oxytocin in addiction, brain injury, anorexia and stress, among other topics.

How is oxytocin controlled?

There is also positive feedback involved in the reflection of milk production. When a baby sucks milk from his mother's breast, the stimulation leads to secretion of oxytocin in the blood, which then lets the milk flow into the breast. Oxytocin is also released in the brain to help stimulate further oxytocin secretion. These processes are self-limiting; production of the hormone is stopped after delivery or when the baby stops feeding.

What if i have too much oxytocin?

At present, the implications of having too much oxytocin are unclear. Elevated levels have been linked to benign prostatic hyperplasia, a condition that affects the prostate in more than half of men over the age of 50. This can cause difficulty in passing urine.

It may be possible to treat this condition by manipulating oxytocin levels; however, more research is needed before any treatments are available.

What if i have too little oxytocin?

Likewise, at the moment it is not entirely clear whether there are any implications of having insufficient amounts of oxytocin in the body. A lack of oxytocin in a nursing mother would prevent the milk ejection reflex and prevent breastfeeding.

Low levels of oxytocin have been linked to autism and autism spectrum disorders (e.g. Asperger's syndrome) - a key element of these disorders is social malfunction. Some scientists believe that oxytocin can be used to treat these ailments. Additionally, low oxytocin has been linked to depressive symptoms and has been proposed as a treatment for depressive disorders. However, there is currently insufficient evidence to support its use for any of these conditions.

You and your hormones: Oxytocin

Read also: Breastfeeding: how to overcome the first difficulties

What does oxytocin do?

Which method is most popular for inducing childbirth?

The most widely used induction system in the world is oxytocin which is administered intravenously (continuously or at different intervals and doses).

What function does oxytocin play during breastfeeding?

During breastfeeding, sucking the baby on the nipple stimulates the release of oxytocin, which in turn promotes smooth muscle contraction which increases milk ejection.

TAG:
Oxytocin and childbirth: what it is for, risks, when to administer it ❯