Palm oil in infant formula: should you worry? 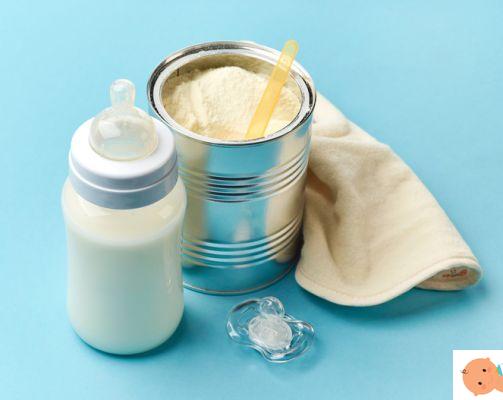 Palm oil is one of the most controversial ingredients used today by the food industry, which also uses it for the preparation of infant formula

. But why is it also used in formulas? It's safe? Are there any possible alternatives? Let's be clear.

1. Why can there be palm oil in infant formula?

In short: because, at least from the point of view of the manufacturing companies, it is an excellent source of palmitic acid, one of the main fats found in breast milk.


Let's start from an assumption: as the word says, formula milk is a product created in the laboratory putting together various substances - fats, proteins, vitamins, minerals and more - with the aim of arriving at one composition as similar as possible to that of breast milk. "These substances come from various sources" explains the family pediatrician Sergio Conti Nibali, head of the nutrition area of ​​the cultural association of pediatricians. "For example, cow's milk, or palm oil, which not only contains palmitic acid, however predominant, but also oleic, linoleic, stearic and myristic acids, all also present in mother's milk".

Conti Nibali is keen to emphasize that "the concentrations of the individual components of a formula they can never be identical to those of mother's milk, a live product, which changes its composition from day to day or at various times of the day for the entire duration of breastfeeding. "Without prejudice to this clarification, it should be remembered that the composition of" infant formula ", as they are technically called artificial milks, must follow parameter I precis indicated by the Codex Alimentarius, an international technical-scientific body created by the FAO and the World Health Organization also with the aim of guaranteeing the safety of food products. The benchmarks are elaborated from the indications that emerge from scientific studies and opinions, such as those of the European Food Safety Agency (EFSA).

While remaining within these parameters, each manufacturer offers its own formula, with various concentrations of various ingredients that can come from different sources. As for the fats, which are a very important component of breast milk - in particular oleic acid and palmitic acid - there are various possibilities: vegetable oils (rapeseed, sunflower, olive, palm, coconut), often used in mixtures, or even products of animal origin, such as cow's milk cream.


Among the many sources, palm oil is the one preferred by most producers, and the explanation is simple. As Renato Bruni, chemist and botanist of the Food Science Department of the University of Parma points out, "it costs less, is always available in large quantities and is available on the market from many suppliers, so companies do not have to worry about nothing".

2. But is palm oil safe for the baby or can it hurt him?

Undoubtedly, palm oil is one of the most controversial ingredients in the food industry today. The accusation is that it is bad for health, in particular that of the cardiovascular system, also because it is now practically omnipresent.

The problem is that it is rich in saturated fat, therefore more similar to the fats present in products of animal origin such as meat, butter, dairy products, than to the typical vegetable fats, which are unsaturated and are considered more noble and with positive effects for health. Indeed, data from the scientific literature indicate, especially for adults, the existence of an association between excessive consumption of saturated fat and an increased risk of developing obesity and cardiovascular diseases, such as heart attack and stroke. That said, the studies that specifically concern palm oil are still too scarce and fragmented to be able to draw definitive conclusions on its possible specific danger.

And if it is true that children and adults must be careful not to overdo it with foods rich in saturated fat, including palm oil, it is equally true that the situation is different for infants. "We must not be afraid of the expression saturated fat"underlines Carlo Agostoni, professor of pediatrics at the University of our city, member of the National Committee for Food Safety of the Ministry of Health and former member of the scientific panel of Efsa on dietetic products, nutrition and allergies." Let's not forget that breast milk contains about 40% saturated fat, essential to give energy to the growth of the child. Of these, 20-25% is represented by palmitic acid".

In the current state of knowledge, therefore, there is nothing that says that the presence of palm oil in infant formula can have long-term consequences on the health of children, in terms of risk of obesity or cardiovascular disorders. However, the fact remains that the consumption of infant formula can cause some problems for the little one, especially intestinal disorders such as constipation and colic. "But this does not only concern formulas containing palm oil, but also those with palmitic acid derived from other plant sources"underlines Giacomo Faldella, director of the Neonatology Operative Unit of the University Hospital of Bologna.

3. Why can infant formula cause more intestinal disorders? Does palm oil have anything to do with it?

The bottom line of the matter is that the palmitic acid in the formulas is not exactly the same as that of breast milk. Meanwhile, there is a question of quantity: "In mother's milk the concentration is not exactly fixed, but also varies according to the diet that the woman follows" explains the pediatrician Margherita Caroli, head of the Hygiene Nutrition Unit of the 'ASL of Brindisi. "In artificial milk, on the other hand, it is necessarily fixed".

The main difference, however, is in quality and concerns the chemical nature of the structure to which palmitic acid belongs. "Palmitic acid is not found alone in breast milk and infant formula, but in the so-called triglycerides, fats that have the shape of a three-toothed comb" explains Agostoni. "Well, in mother's milk, most of the palmitic acid is found in the position of the central tooth of the comb, the so-called position 2. In artificial milk, on the other hand, most of it is found in the most external positions and this concerns all plant sources of palmitic acid, whether it is palm oil, rapeseed or other ".

This different chemical structure has consequences: in practice, palmitic acid in positions other than 2 is absorbed less, and calcium is also absorbed less, with the formation of compounds that make the stool a little harder. Result: the so-called minor gastrointestinal disturbances, such as abdominal tension, colic, constipation, small refluxes. "But be careful - specifies Faldella - this does not mean that all children who take formula milk have these problems. Generally, the formulas are used and digested without difficulty, and vice versa some children have digestive problems even with their mother's milk. Simply, it means that in infants fed with formula these disorders are a little more frequent ".

Due to the lower calcium absorption, it has been hypothesized that the consumption of artificial milks containing triglycerides with this particular chemical structure - that is palmitic acid in the external positions of the comb - may result in alterations in the mineralization of the infant's bones, which could therefore be more fragile. As reported in an extensive article on palm oil in baby food by nutritionist pediatrician Vito Miniello, from the city's university hospital, some studies seem to indicate that, in the short term, babies fed with this type of milk show a reduced bone mineralization. In the long term (3-4 years of the child's life), however, there do not seem to be any significant differences. However, it is too early to draw firm conclusions on this point.

4. Are there artificial milks better than others from the point of view of the chemical composition of the fat and intestinal consequences?

There are formulas on the market containing mixtures of vegetable oils treated in such a way as to guarantee one greater presence of fats with palmitic acid in position 2, the one in the center of the comb, just like it happens in breast milk. They are formulas designed especially for premature babies or infants who actually suffer from minor gastrointestinal disorders and are definitely more expensive than the others, but do they really work?

Many parents and pediatricians are quick to swear yes, but it must be said at the moment there are no definitive conclusions on the matter. "Evaluating these effects in a clinical study is not that simple" Agostoni points out. "The studies available are still too heterogeneous to say with certainty that these formulas work. Which obviously does not mean that they do not work."

Meanwhile, some manufacturers are organizing to reduce the content of vegetable oils, in favor of animal sources of fat, such as cow's milk cream. In reality, the chemical profile of the fats of these sources is not necessarily better, because it varies a lot according to the diet followed by the animals. And the available data on these products with respect to gastrointestinal effects are practically non-existent.

5. To conclude: if there is palm oil in infant formula, should we worry and look for something else?

All the experts interviewed - Agostoni, Faldella, Miniello, Caroli, Conti Nibali - answered no to this question. "There is no health problem related to the presence of palm oil in infant formula," says Agostoni. "To the utmost, what can be asked is the environmental question, given the heavy environmental impact, with fires and deforestations, which involves the production of this ingredient in tropical areas. "Experts, however, agree that the ideal would be breastfeeding and that, if this is not possible, palm or no palm makes no big difference to the health of the baby.

Nutrition after weaning: here are the most common doubts of mothers with the answers of the nutrition pediatricians Giacomo Cagnoli and Ilaria Giulini Neri of the NutrMyModernsParents team of Icans, ...

"What you really need to worry about is feeding after artificial feeding"Miniello underlines." There is no point in worrying about milk if, once that is stopped, the baby is filled with products rich in palm oil. And remember what this ingredient is present in many packaged foods, starting with biscuits for children, passing through rusks, crackers and breadsticks, up to the more elaborate snacks. All foods in which, unlike infant formula, saturated fats are definitely useless from a nutritional point of view. For this reason, products with oils rich in unsaturated fats such as olive or sunflower oil should be preferred ".

add a comment of Palm oil in infant formula: should you worry?