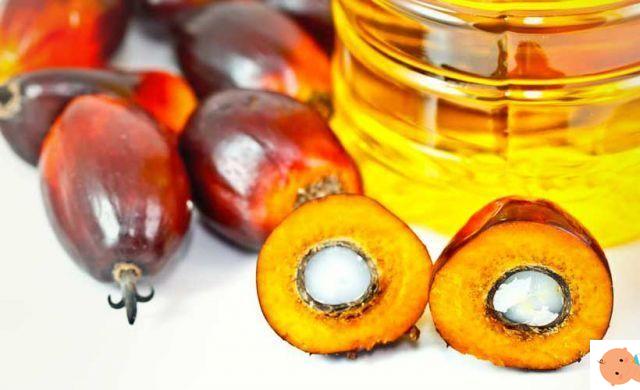 Palm oil is like parsley. In food of industrial origin it is practically everywhere: from rusks to snacks, from bread to spreads, from margarines to ice creams. Not even missing in special products for children, like the first biscuits. To mothers and fathers, rightly the doubt arises: will it do good or will it hurt? Better to avoid or can it safely be part of children's nutrition?

Let's face it immediately: there are not many accurate and conclusive scientific studies on the specific effects of palm oil for the health of children. This, however, does not mean that something cannot be concluded about it.

What is palm oil?

Let's start from the beginning and that is from the palm oil itself. It is an oil obtained from the pressing of the fruits of the tropical palm Elaeis guineensis. In the countries of origin it is often used as it is (it is a liquid of a lively red color), both raw and for cooking, but in the food industry it is used only after refining. In practice, a solid or semi-solid fraction is used which gives great advantages to producers, because it is very versatile, practically tasteless and cheap. Much less than butter, which it can easily replace because it has the same structural characteristics.


No wonder: like butter, palm oil has a high saturated fat content, about 50%. And it is the saturated fats that give it those special characteristics, but also raise doubts about its safety for health.

The problem of saturated fat

Fats, in general, are not to be demonized. According to the Scientific Opinion on fats of the EFSA, European Food Safety Agency, in the correct nutrition of an adult these substances should provide from a minimum of 20% to a maximum of 35% of the daily caloric quota.


And even higher values ​​are expected for children, who need them to better assimilate some vitamins and for the development of the nervous system: about 40% in the first year of life and from 35% to 40% from one to three years.

However, not all fats are the same. There are saturated ones, mainly of animal origin (butter, dairy products, meat), but also present in some vegetable oils and in particular palm oil, and unsaturated ones, such as extra virgin olive oil fats or omega three some fish.

Well, we have long known that the unsaturated fats are the ones to be preferred in the diet. An imbalance in the ratio between saturated and unsaturated fatty acids and in particular an excessive consumption of the former is in fact associated with an increased risk of developing obesity and cardiovascular diseases, such as heart attack and stroke. All the more so if you start eating too many from an early age.

For this, the advice shared by nutrition experts is of limit the intake of saturated fatty acids in the diet as much as possible. In particular, EFSA's scientific opinion concludes that this contribution should be as low as possible.

In fact, we are all very careful not to overdo the butter: we would never dream of eating large slices of grandma's tart every day and if we do we are aware that it is not the healthiest thing in the world. "Likewise, we should be careful of do not overdo it with palm oil, because from a nutritional point of view it is perfectly comparable to butter "says Laura Rossi, nutritionist at the CRA.

According to Marco Bianchi, scientific popularizer of the Umberto Veronesi Foundation and author of several "healthy" cookery books, this is even more true for children, especially if they are very young. "In the first years of life, the cells of the adipose tissue form a kind of memory of the substances they come into contact with. If there are too many saturated fats in circulation, this condition can predispose them to problems that will be felt later on and throughout life. ".

Not to mention that there are those who, like Enzo Spisni, professor of physiology of nutrition at the University of Bologna, warn against risk that palm oil may contain residues of toxic substances such as pesticides, used for its cultivation. “The analyzes conducted so far in the international arena show that the concentrations of these substances fall within the established thresholds. But there is always the risk of a build-up effect, especially critical for children, if you overdo it with products containing palm oil ".

What to do then? "It is not a question of demonizing this ingredient" points out Rossi. As happens in the vast majority of cases, even palm oil, if taken only occasionally as part of a balanced diet, is not harmful.

This is confirmed by the conclusions of a scientific review of the literature published by some researchers of the Mario Negri Institute of Pharmacological Research: the studies available on adults say that, if the starting cholesterol levels are good and there is an adequate intake of acids unsaturated fats, saturated fats in palm oil do not pose a particular danger to cardiovascular health nor do they appear to be involved in cancer risk.

"If every now and then our children eat something that contains palm oil, nothing happens, just like in the case of butter," says Rossi. "The problem is daily consumption, perhaps several times a day, of these products. "And since palm oil is so widespread, the risk of consuming too much, perhaps unconsciously, is just around the corner.

Now, getting rid of industrial products altogether can be difficult, but you should definitely try to limit them, at least as long as they contain high amounts of saturated fat (some companies are reformulating their recipes to reduce this content). "Let's take the snack time: the ideal would be to vary it as much as possible" suggests Laura Rossi. “If we really have to give a packaged snack to the child, it is better that it is small and lightly filled. And in any case, the snacks should be alternated with other products, such as yogurt, fresh or dried fruit, white pizza prepared with olive oil, maybe a small sandwich with ham".

And for homemade desserts? "Green light to delicate olive, corn or sunflower oil" advises Bianchi. "And also to dried fruit such as walnuts, almonds, hazelnuts, which hold good in cooking and give a good flavor to the dessert".

Mothers in the forum discuss food and recipes for children

TAG:
Extra virgin olive oil: because it is good for children ❯

add a comment of Palm oil, yes or no?