Pandas, what it is and how to recognize it 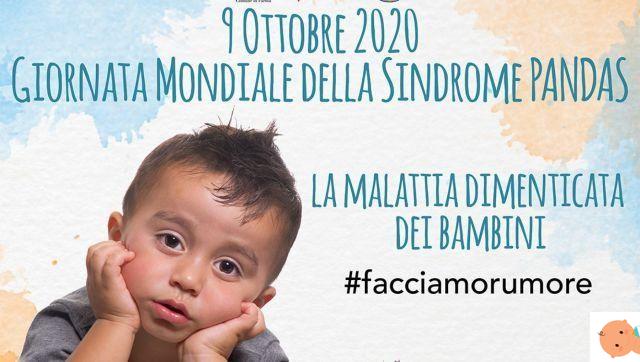 PANDAS: what is it

The acronym PANDAS, in English, stands for autoimmune neuropsychiatric disorders associated with Streptococcal infections.
These rare disorders have the characteristic of onset in pediatric age, more frequently between the ages of 2 and 12. They manifest themselves with tic or other compulsive behavior, and occur after a group A beta-hemolytic streptococcal infection (for example, tonsillitis or scarlet fever), periods of remission, and neurological abnormalities such as motor hyperactivity or choreiform movements.

Streptococcal infection would result in the formation of antibodies against the bacterium, which also act on some brain tissues. This mechanism is similar to that of another neurological manifestation of streptococcus: the Sydenham's chorea.

However, the clinical manifestations of PANDAS are different from those of Sydenham's chorea: the onset is sudden and the movements of the hands and feet are fine (as if the child were playing the piano) and often impair some motor skills such as writing, and are often associated with anxiety or eating disorders.

Although PANDAS are universally recognized, there is no absolute certainty that strep infection is the main cause of this disorder. Indeed, the effects of antibiotic therapy and other immunological therapies are controversial and the high frequency of streptococcal infections in the population contrasts with the low frequency of PANDAS and there is no biological marker of disease.

How to diagnose PANDAS

To diagnose PANDAS, clinical manifestations after a group A beta hemolytic streptococcus infection should be observed. Diagnosis may be helpful. laboratory research of signs of streptococcal infection in children with obsessive-compulsive disorder.

It is not always easy to distinguish PANDAS from Sydenham's chorea. In children already with obsessive-compulsive disorder, PANDAS can manifest with a sudden worsening of the same. They can also manifest themselves mood changes, attention deficit hyperactivity disorder, sleep disturbance and joint pain.

Read also: Tics in children: how to behave

La Sydenham chorea is a movement disorder caused by an abnormal immune response to a SBEGA infection.

Source of this article:

Bambino Gesù Hospital: From tics to strep: the PANDAS

Read also: Obsessive Compulsive Disorder, what exactly is it and how to treat it TAG:
Night panic in children: what is pavor nocturnus and how does it manifest itself ❯

add a comment of Pandas, what it is and how to recognize it