Papilloma virus: symptoms, transmission and vaccination. Everything you need to know 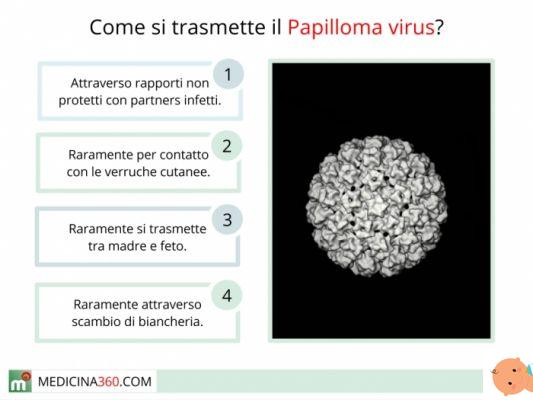 Every woman you give To 20 50 years has a probability of 70-80% to get in touch with theHPV (from English, Human papilloma virus). This kind of infection it can also last a lifetime and, when it is latent, it can be reactivated in the event of a drop in the immune defenses.

However, this high probability of infection does not necessarily correspond to the development of a disease: in about80% of patients hit, in fact, there is one spontaneous resolution. If, however, the infection persists for many years, it can lead to one precancerous lesion. But fewer than 10% of persistent high-risk HPV infections lead to cancer after an average interval of 15 years.

Let's talk about papilloma virus with Dr. Carlo Liverani, head of the Preventive Gynecological Oncology Center of the Clinic of the Polyclinic of our city.

Watch the video with the interview

What is the papilloma virus?
By papilloma virus we mean a family of viruses, made up of more than 170 strains, at different degrees of oncological risk: this means that they do not necessarily cause cancer. Cancer is actually an extremely rare complication of a sexually transmitted infection, which is very common.


What are the symptoms?
Symptoms are different depending on who you are talking about low virus or ad high risk. In the first case, it is possible that gods are formed warts in the genital areas, namely the warts. In the second, however, the symptoms are absent, so the virus is detected only by screening: the pap test or the HPV test of DNA.

How is it transmitted?
Transmission of all HPV strains occurs mainly by sexual means, but occurs by direct contact between the skin and mucous membranes. The protected sex with a condom it definitely is advisable, because it prevents other sexually transmitted diseases, but it is not enough to protect against the papilloma virus. This is because the condom does not cover all the genital parts, which can be responsible for the transmission of this infection.

Can man also contract it?
The answer is yes, for both low-risk and high-risk strains. In the first case, if the man notices warts or growths on the penis or genital level (florid warts, also known as "cockscombs"), it is prudent that he check by the dermatologist, in order to avoid passing them on to the partner.
Man is also affected by high-risk strains, although in this case the man is a so-called "Healthy carrier". However, it is still a carrier and therefore it can happen that, in some selected cases, it develops tumors or pretumors.

How is it treated?
There is no real cure for papilloma virus infection, because there are no drugs that can destroy it. However, there are therapies that can be implemented: on the one hand, to eliminate the warts that form in the case of florid lesions, such as warts; on the other hand, to eliminate and remove the pretumor lesions, in order to prevent them from turning into invasive cancer over the years.
Therefore, while the man does not have to undergo particular tests, in the woman this virus could cause some precancerous lesions at the cervical level, therefore in the cervix, but also at the vulvar level. So it is prudent that in the case of a pap smear or of an positive viral test, take a second level exam, which is called colposcopy. Thanks to this test, one can see the injured part enlarged and decide whether, in the case of a low-grade lesion, it is susceptible to a simple remote control, in the hope that there will be a spontaneous resolution of this pathology; or, in the case of a high-grade lesion, proceed with the removal, which can be done with a simple operation under local anesthesia.

Is there a vaccine and who can do it?
Fortunately, there is an opportunity to get vaccinated. There is a vaccine, which does not protect against all types of papilloma virus, but against some types, which are however the most frequent and dangerous ones. This vaccine is safe: it is immunogenic and effective and can be done in both men and women without age limits. Up to 12 years, then, it is free. And this is the most recommended age to do it, because it is before the start of sexual activity. However, it can also be done afterwards: up to 45 years and even beyond.

TAG:
Human papilloma virus: 32 questions and answers to know everything about HPV ❯

add a comment of Papilloma virus: symptoms, transmission and vaccination. Everything you need to know