Paracetamol in pregnancy: is it true that it is bad for male fetuses? 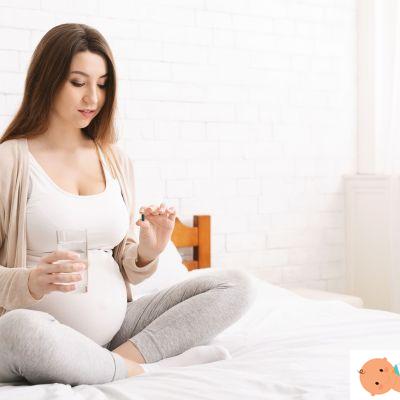 Paracetamol is considered to be the safest drug pregnant, to be taken practically with your eyes closed, without too many worries, in case of high fever or some pain. Still, in recent years some studies have suggested that taking this drug during pregnancy could lead to it some risk to the fetus.

The latest alarm in this regard concerns the possibility that paracetamol can inhibit normal testosterone production, a sex hormone, in male fetuses. Which, in the long run, could translate into a increased risk of infertility or some forms of cancer.

To suggest this drug's interference with the endocrine system of the developing fetus is a study conducted in mice and just published in the journal Science Translational Medicine. But how are things really? Should you worry? Do the general indications for taking paracetamol during pregnancy remain valid or does something change?

The study on mice

"It all started with some epidemiological studies that showed a slight increase in the risk of cryptorchidism in infants whose mothers had taken paracetamol during pregnancy" says Giuseppe Bacis, medical toxicologist at the Poison Control Center of the Pope John XXIII Hospital of the city, a very active center on the safety of drugs in pregnancy. "These are few studies, not particularly solid from a statistical point of view, but it was certainly worth investigating the question".

Exactly what Rod Mitchell and colleagues did at the University of Edinburgh. Specifically, the researchers went to see the effects of taking acetaminophen in mice that they "mimicked" the condition of a human pregnancy, with a male fetus. They observed that, in mice, taking one week for one daily dose of paracetamol comparable to that which would be used in humans (20 mg / kg, three times a day) inhibits fetal testosterone production. "An effect - the authors write in the article - that could have negative long-term consequences".

According to Bacis, "these results seem to offer an explanation for what was observed in previous epidemiological studies, but there are still many aspects to be clarified. Starting from the fact that what observed in the animal model cannot be immediately transferred to the human being. "For example, the experiment involved the daily administration of paracetamol for a week, which corresponds to about one third of the duration of pregnancy in a mouse. For a pregnant woman it would be like taking paracetamol for three months straight ...

Safe use of paracetamol in pregnancy

What to do then? "As interesting as these results are, they still are absolutely foreplay and they do not shift the indications of clinical practice by one iota "underlines the toxicologist. And that is: in pregnancy, paracetamol it is considered safe and is the drug of first choice as an antipyretic (to lower fever) and analgesic, but of course it must be taken only when needed, at the lowest effective dose and for the shortest time possible. "But this was true even before, and it applies to every drug, both in pregnancy and outside of pregnancy," Bacis says.

Like all drugs, acetaminophen should only be taken when needed, at the lowest effective dose and for the shortest time possible. So it is safe in pregnancy

And therefore: unless there are personal contraindications (for example an allergy to the drug), the expectant mother can safely take paracetamol if you have a high fever or severe pain. If the symptoms persist, after two or three days of treatment it is always worthwhile consult your doctor. Or call the toll-free number of the Information Service on the use of drugs in pregnancy active right at the hospital of the city: +800 88 3300 XNUMX.

Between risks and benefits

In general, what is important to remember about the use of drugs is that we should reserve it for cases where it is really needed. Often, however, we get carried away, and we look for a pharmacological solution for every slightest discomfort. Let's think about the fever: with 37,5 ° we are ready to take an antipyretic, while below 38 ° you can easily do without it.

"The point is that even the safest drugs can have some minor or rare side effects"Bacis comments again."Zero risk does not exist, for this reason, a careful assessment of the relationship between risks and benefits must be made on a case by case basis ".

Not only the risk of cryptorchidism: some studies also seem to suggest an association between taking paracetamol during pregnancy and the development of other conditions in the baby, such as asthma and ADHD, attention deficit / hyperactivity disorder. "Even in these cases, however, it is a matter of a few studies, rather weak, which have given only preliminary results" explains Bacis. Again: trends to keep an eye on, but that do not change things: when taken correctly - when needed, at the lowest effective dose and for the shortest possible time - acetaminophen continues to be safe.

Before taking any medication it is important to ask your doctor, also inquiring about safe doses.

Tachipirina in pregnancy every how many hours

The maximum recommended dose is 1 Tachipirina 1000 tablet or sachet 3 times a day. It is generally not necessary to reach this dosage.

Tachipirina is the drug of choice since the first weeks of pregnancy to manage pain of various kinds and fever.

What can tachipirina in pregnancy be taken for?

Paracetamol is used to:

add a comment of Paracetamol in pregnancy: is it true that it is bad for male fetuses?