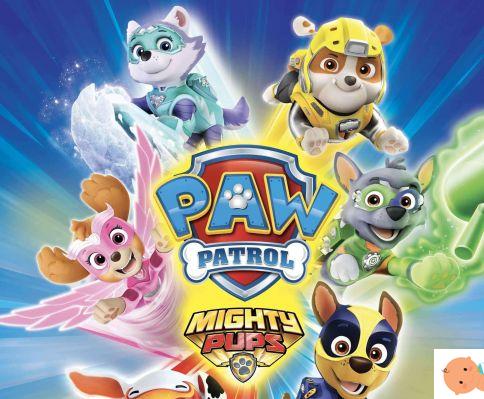 A new and highly anticipated animated film is coming, inspired by the homonymous TV series Paw Patrol, which has record ratings all over the world (in Del Paese in Del Paese it is broadcast on Nick Jr. - Sky channel 603): it's about "Paw Patrol - Mighty Pups. The super puppies movie".

Well, from 21 to 25 December, Ryder e i cuccioli Chase, Marshall, Rubble, Zuma, Skye, Rocky ed Everest, with their awesome superpowers, they come to theaters with a fun new children's film.

Produced by Viacom International Media Networks and Spin Master Entertainment, this new feature is intended to entertain children and adults alike and convey important values ​​such as teamwork and friendship.

Harold, Mayor Humdinger's grandson, inadvertently hijacks a meteorite that threatens to hit the city of Adventure Bay: That's why Ryder and all the puppies come into action.

Also, when the meteorite passes, Harold and the puppies are hit by a strange energy e they acquire incredible superpowers, thus becoming… Mighty Pups! With the new power, Harold enacts his plan to take over Adventure Bay and imprison Ryder in the tower.

Will the superpuppies work together to defeat Harold, his giant robot, and rescue Ryder? One thing is certain: Mighty Pups are unstoppable!

HERE IS THE TRAILER:

Paw Patrol, curiosity and news about the puppy team always ready to help those in need

On March 14 comes the third season of the Paw Patrol, the tender rescuers always ready to face any emergency. You will be able to see the series, created by Keith Chapman, every day at 19.40 pm ...

TAG:
Patience: 9 strategies to teach it to children ❯

add a comment of "Paw Patrol - Mighty Pups. The film", in cinemas from 21 to 25 December