Pediatric osteopathy: what it is, how it works, benefits and risks 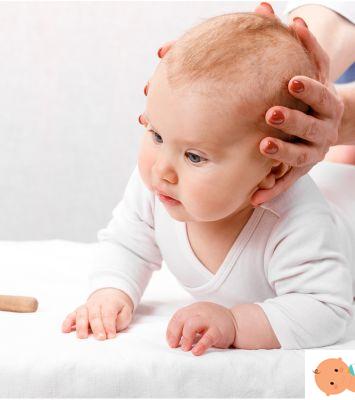 Pediatric osteopathy is one gentle and non-invasive technique widely used to treat various pathologies that can manifest themselves from the first weeks of life of the newborn. It is a complementary discipline to traditional medicine that has both curative and preventive functions. Like all bodily manipulations, However, it is not risk free and must therefore only be performed by experts, even better if it is a matter of doctors. Let's see in detail what pediatric osteopathy is, what are the benefits and risks of this practice, and also what scientific studies say about it.

Pediatric osteopathy: what is it all about?

Before talking about pediatric osteopathy, it is necessary to clarify what osteopathy really is that we hear so much about today. The term osteopathy was coined at the end of the nineteenth century by the American Andrew Taylor Still, inventor of the discipline.

Osteopathy is one manual medicine which conceives the health of each individual as a whole and in fact considers all parts of our body as interdependent and connected to each other. This practice relies on body manipulations, light pressures and other movements to try to locate the cause of the pain. According to the principles of osteopathy, there is no attempt to cure the symptoms, but rather a natural self-healing process is stimulated.

In short, it is a rather particular practice, which today divides public opinion between those who blindly believe in the beneficial effects of osteopathy and those who, on the other hand, consider it a discipline without scientific basis.

Osteopathy was officially recognized as a health profession by the World Health Organization (WHO) already in 2022 and has been recognized in this sense in our country for a few months.

But now let's get to the gist of the matter: thepediatric osteopathy for babies and children.

Pediatric osteopathy is based on the same principles as "classical" osteopathy, but the approach is somewhat different. They are used only very delicate techniques, specially designed for the body of infants and children, which include manipulation, pressure on the skull, back, abdomen or other areas of the body, and massage.

Pediatric osteopathy: when can it be useful?

We usually go to a baby osteopath to fix some problems that the baby may experience in the first few months, especially as a result of childbirth. In fact, during the natural birth, especially if it was very painful and particularly long, the baby could have suffered some minor traumas from which different types of plagiocephaly (deformations of the skull) can arise. In some European countries, babies are even subjected to routine osteopathic screening in the days immediately following birth, while still in hospital.


In other cases, skull deformations could result from the baby's sleeping position.

But the use of pediatric osteopathy certainly does not stop there. According to the Del Paesene guidelines, in the first months of a child's life, osteopathy could also be useful for other problems such as:

Read also: Gastroesophageal reflux in infants, how it is treated with osteopathy

In older children, we say in school age, osteopathy is recommended for the treatment of:

As can be seen from these examples, most of these issues require one multidisciplinary management. The osteopath, in fact, often works in synergy with other professionals such as the dentist, the speech therapist, the podiatrist and so on.

How does the visit to the osteopath work?

During the first visit the osteopath will do some questions to parents on the reason for the consultation, on the general health of the child, on the child's possible drug intake. In short, a kind of anamnesi.

Next, the osteopath will observe the child and he will visit him by making him make some movements that allow the professional to evaluate the posture and to understand if there are any asymmetries or dysfunctional areas.

Once the picture is clear, the osteopath will inform the parents about the possible causes of the disorder and formulate a therapeutic path. For some children, even one meeting may be enough, while for others it may take several sessions.

Sessions at the osteopath usually have one average duration of about 45-60 minutes, depending on the problem to be treated.

Osteopathy: Does It Really Work? Here's what the scientific studies say

When it comes to osteopathy, great debates usually arise because there are those who believe in the usefulness and effectiveness of this practice and those who believe it has no scientific basis. The various associations of osteopaths frequently claim that in the scientific literature there are numerous studies that demonstrate the effectiveness of osteopathy for the treatment of various pathologies. But if we go to sift through among the various scientific reviews, unfortunately we do not find much. There are few studies which demonstrate the usefulness of osteopathy, even in the pediatric field, and are often of poor methodological quality.

A systematic review of the literature, published in 2022 in the prestigious scientific journal Pediatrics, argues that the evidence of the efficacy of osteopathy for pediatric diseases remains unproven due to the low methodological quality of the studies analyzed.

Although the scientific evidence is therefore very little, many parents are still satisfied with the osteopathic treatments performed on their children and declare that they have obtained good results. The important thing, in any case, is to always discuss with your pediatrician before an osteopathy session since it is a practice that is not suitable for all children.

Read also: Plagiocephaly: how to prevent flat head in the newborn

Contraindications and risks of pediatric osteopathy

As we said above, pediatric osteopathy uses gentle and non-invasive movements, but it is still a matter of bodily manipulations. For this reason it is not a totally risk-free practice, although these are very rare.

If the manipulations are not performed by expert hands, there is a risk that osteopathic treatment will provoke injury to the spinal cord or limbs.

Furthermore, the treatment is contraindicated in children with head trauma, fractures and congenital malformations, as well as in cases where infectious diseases are present.

Pediatric osteopathy: who to rely on?

In Of the countryInstead, there are no specific degree courses to become an osteopath and it is not even mandatory to be a doctor to be able to work. In fact, everything is entrusted to private courses of variable duration open to practically anyone, even if there are no strictly medical bases in one's curriculum. This is an aspect that causes a lot of discussion. Osteopathy, in fact, involves manipulations which, as indicated in a letter from Dr. Davide Albertoni to QuotidianoSanità, it would be better if they were performed by those who have a background in conventional medicine (graduates in medicine or in health professions).

The advice is therefore to rely on expert osteopaths, even better if they are doctors in all respects.

Other sources used for the article:

Osteopathy and Chiropractic: Science or Quackery? Article by dr. Except for Grace, 2022;

Articolo "The use of osteopathic manipulative treatment in the newborn nursery and its effect on health in the first six months of life: A retrospective observational case-control study", in Complementary Therapies in Clinical Practice, 2022;

Articolo "The role of osteopathy in clinical care: Broadening the evidence-base", in Interntional Journal of Osteopathic Medicine, 2022.

TAG:
Postpartum midwife: what she does and why it is useful ❯

add a comment of Pediatric osteopathy: what it is, how it works, benefits and risks