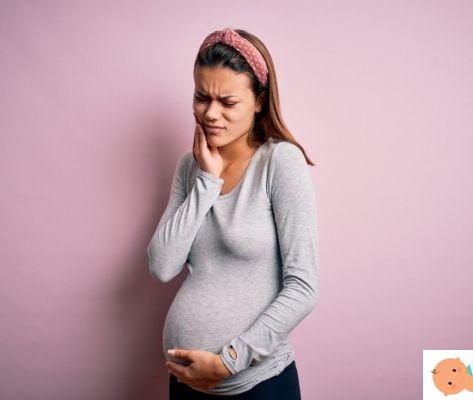 Pregnant women may be at increased risk for pathological dental conditions, such as periodontitis. Periodontal disease or periodontitis is a very widespread pathology that can have as a consequence mobility and tooth loss. This is associated with complications for both mother and baby, including the possibility of the mother losing her teeth and an increased risk of preterm or low birth weight birth for the baby.

Periodontal bacteria (in particular Porphyromonas Gingivalis)  they can enter the circulation, reach the placenta and generate toxins within the amniotic fluid which result in inflammation potentially causing premature birth.

Read also: Gingivitis in pregnancy: what it is and what to do

Increased risk of periodontitis in women

It has been suggested that hormonal changes during pregnancy, particularly marked increases in estrogen and progesterone, may be partly responsible for the increased risk of developing periodontitis. Other possible factors that may be involved in the etiology include changes in the blood flow to the gums.

Some research has suggested that pregnant women with periodontitis may be at increased risk for certain obstetric complications, such as having a premature or low birth weight baby.

This is a concern because babies with a birth weight of less than 2,5 kg may be more likely to suffer from long-term disabilities such as delayed motor skills development, poor social growth and learning difficulties. Premature babies have similar risks, in addition to breathing problems, vision loss, or hearing and digestive tract problems.

Although it has been observed that babies born to mothers with periodontitis are more likely to be born prematurely or with a low birth weight, it is unclear why this is the case. The results were normalized for other factors, such as lifestyle and dietary factors, but there appears to be an independent association between periodontitis and the risk of low birth weight and preterm delivery.

It is especially important for pregnant women to take good care of their teeth during pregnancy to help prevent dental health problems, such as periodontitis.

First and foremost, self-care of the teeth is paramount. Pregnant women should be encouraged to brush their teeth at least twice a day and to floss every day. This helps to regularly remove plaque around the teeth and gums so that it is difficult for a bacterial infection to take hold. In some cases, the use of a mouthwash may also be helpful.

Dental care during pregnancy is generally considered safe. This can play a key role in removing plaque and bacteria that can cause an infection and possible complications for the woman and her baby. For this reason, regular dentist appointments are recommended for cleaning teeth at intervals during pregnancy.

add a comment of Periodontitis in pregnancy: causes, symptoms and remedies