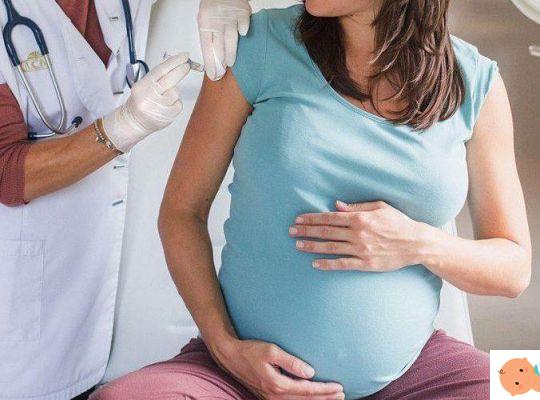 This is one of them news that certainly they will reassure future aunt moms: pertussis vaccine made in pregnancy to protect the child hardly nato it is not connected to the risk di autism. A recent demonstrates this study which now can calm all women pregnant wondering if it is appropriate to undergo this or not vaccination during the gestation.

Increasingly i gynecologists recommend to their own patients with baby bump to carry out the pertussis vaccine in third quarter of pregnancy. Typically, it is done between the settimana 27 and 36. The purpose is to give one coverage al little one just nato and until it's time to make her first Vaccine, around the 2 months di "vita". THE'effect of Vaccine lasts approx 6 months, that's why then i Infants they must be vaccinated in turn.

Recently, thetopic jumped to the honor of Chronicles because in ours Country there have been at least the two cases of Infants died from the whooping cough, a disease that in children it can be a lot dangerous because it can cause disturbances respirators also a lot gravi. Protect the mum in pregnancy with the pertussis vaccine therefore means protect way their child. Through the placenta in fact the antibodies arrive at fetus: at the birth il child Sara covered for this pathology.


In Of the country, there is no pertussis vaccine single, but it comes proposed quello trivalent, that is, in association with the one against the diphtheria and tetanus (Tdap). It is a vaccine sure and so it can be administered in pregnancy (unlike, for example, the one against the rubella, which has the virus active and that can therefore be dangerous). As always, however, it is possible to get caught by doubts and by fears. The study which we mentioned can help fugarli.


La search was conduct al Kaiser Permanente Southern California and it was published in the magazine "Pediatrics". The scientists have studied more than 80 thousand children for a period di 4 years to to ascertain if so checked un number greater than cases of autism among those whose mothers had been vaccinated during the pregnancy. Only 569 children (1,5% of the total) which moms they had received la vaccination, they subsequently had a diagnosis di autism, rispetto a 772 children (1,8%) whose mothers they weren't vaccinated.

According to the experts “None were found association between Vaccine Tdap received during the pregnancy andautism in children. If there was any hesitation tra the future moms they can be reassure, do the Vaccine does not increase the risk di autism in children“, Explain i researchers Americans. As well as ours authority health, also i Centers for Disease Control and Prevention US encourage le women in pregnancy to undergo the pertussis vaccine in pregnancy to give greater protection ai children.

add a comment of Pertussis vaccine in pregnancy, no autism risk