Pesticides and pregnancy: are there any risks for mom and baby? 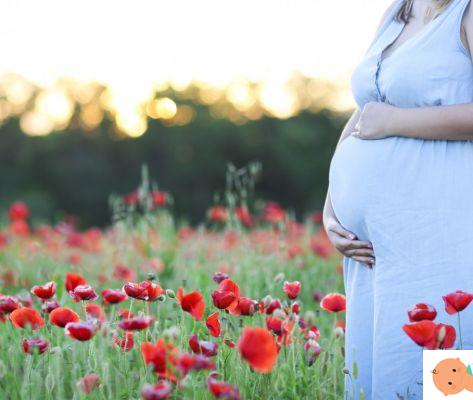 Pesticides, used in agriculture to eliminate anything that harms crops, represent potential health hazard because they can cause liver damage, interfere with fertility, and cause central nervous system problems. During pregnancy, then, exposure to pesticides should be avoided as much as possible because these substances could have negative effects on the health and development of the unborn child.

The word pesticides is the translation of the English term pesticides. The more correct term Del Paeseno, however, is plant protection products, often also called pesticides, pesticides or agro-drugs. it is chemicals, both natural and industrially produced, which are used in agriculture to improve the quality of the harvest, preventing insects and parasites from ruining the crops.

Pesticides, as recalled by the Istituto Superiore di Sanità, have been useful in eliminating diseases such as malaria and yellow fever from some areas, but they are mainly used to encourage greater agricultural production, which is necessary due to the continuous increase in the world population. Alongside these advantages, however, pesticides represent a potential danger to human health and the environment.

In the term pesticide and in its various categories (fungicide, insecticide, acaricide, etc.) there is the suffix "cida" which means "capable of killing". Pesticides, in fact, are a substance capable of kill organisms who are their target. As EFSA, the European Food Safety Authority explains well, pesticides in order to "work" must be able to interfere with the functions of harmful organisms which, however, are often also present in other species, including humans. This means that most substances used as pesticides can have toxic effects even on organisms that are not their direct target.

The effects of pesticides on health

As the Istituto Superiore di Sanità points out, given the great variety of existing pesticides, it is not possible to generalize about the possible health effects of pesticides. What we do know, however, is that more and more scientific studies are showing thatprolonged exposure to pesticides it can cause dermatological, gastrointestinal, neurological, respiratory, carcinogenic, reproductive and endocrine problems. These negative effects affect everyone: adults, adolescents and children, even those who are still in the womb. This is why it is important to watch out for pesticides during pregnancy.

Read also: The effects of pesticides on children's health

The risks of pesticides for mom and baby

The main risks associated with exposure to pesticides during pregnancy mainly concern the development of the fetus, its health and the course of pregnancy.

The causes of autism have been discussed for many years now and we know that genes matter significantly, but also i environmental factors they can contribute. According to research published in The British Medical Journal, exposure to pesticides during pregnancy or in the first year of life is correlated with an increased risk of autism. Researchers from the University of California had already noted that prenatal exposure to pesticides how organophosphates were associated with the development of autism spectrum behaviors and now the study seems to confirm what has already been hypothesized with laboratory tests in vivo and in vitro.

Our findings suggest that the risk of autism spectrum disorder may increase with prenatal and infant exposure to several commonly used environmental pesticides that have been shown to have a impact on neurodevelopment in experimental studies, ”write the researchers who reiterate the importance of keeping pregnant women away from places where pesticides are used.

Read also: Autism, here's everything you need to know

Hypospadias is one congenital malformation, ie present at birth, of the urogenital system due to the incomplete development of the urethra and penis. According to a meta-analysis that looked at 90 studies on the subject, exposure to pesticides during pregnancy correlates with a higher risk of hypospadias.

In fact, as indicated in a 2022 study published in the scientific journal Environmental Health Perspective, mothers who ate organic food during pregnancy were 58% less likely to give birth to a male child with hypospadias than women who had not followed a organic food. Since many pesticides contain chemicals that are active on the endocrine system, researchers have suggested that one reduced exposure to pesticides could protect unborn children from endocrine-related health effects, such as hypospadias. At the moment, however, it is a hypothesis and not something certain. The author of the study herself, Anne Lise Brantsæter, states that we are faced with a "purely hypothetical suggestion". Brantsæter, in the research conclusions, recommends all pregnant women to eat a balanced diet that includes at least five servings of fruit and vegetables a day, regardless of whether the products are organic or not.

The influence of pesticides on MAP pathways

A recent study conducted by Harvard University in Boston and sponsored by the "National Institute of Environmental Health Sciences (NIEHS)", showed for the first time that the consumption of fruit and vegetables with even low residual doses of pesticides results in a lower probability of success of medically assisted procreation (MAP) treatments. The researchers looked at a group of 325 women who completed a dietary questionnaire prior to undergoing ART treatments and found that those who routinely ate fruits and vegetables with a greater presence of pesticides had the 18% less likely to get pregnant and 26% less likely to carry it to term. The study, however, has some limitations and, as reported by the authors themselves, does not claim that pesticides cause an increase in abortions. Furthermore, the study's conclusions are not generalizable to women who conceive spontaneously.

Finally, according to a French study published in 2022, if the future mom works in contact with pesticides there is more likely to be a high risk of low birth weight as well as a significant risk of preterm birth. While, again according to this study, no significant association was found between fetal growth and organic food intake during pregnancy.

Read also: The birth weight of a newborn: what does it depend on and how does it grow in the first months?

Organic nutrition in pregnancy: is it really the solution?

It is certainly true that fewer pesticides are used in organic farming than in traditional farming, but this does not necessarily translate into a lower risk to our health. According to a review of the literature, conducted by Dr. Stanford University, although the consumption of organic foods can slightly reduce the risk of exposure to pesticides, there is no evidence that an organic diet involves fewer health risks. What really makes the difference is the type of diet you follow in the family. The researcher stressed the importance of eating more fruit and vegetables "in whatever way they are grown".

Read also: Organic nutrition in pregnancy: what are the advantages for mom and baby?

To avoid the toxic effects of pesticides, the Paediatricians Cultural Association offers some suggestions to protect children, but also adults. In particular, it is important:

As consumers, we can also further reduce the risk of exposure to pesticides washing fruit and vegetables thoroughly and changing our food choices every day.

add a comment of Pesticides and pregnancy: are there any risks for mom and baby?