Photoreportage: with the birth of Celeste, I made peace with the cesarean of Ambrosia 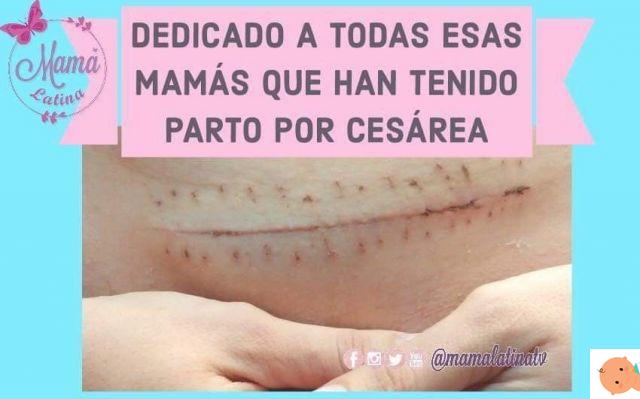 "I was wondering. How painful will a birth of a uterus be that has never had a labor, but has already been cut for a caesarean? How many fears and fears. In retrospect, I can say that they were not unfounded. For me. it was a very painful experience. In this type of birth, you have to hurry up and the epidural only took effect for a couple of hours. We hurried in 7 hours and with little anesthesia. The pain was there and it was a lot. But as I told my gynecologist:

'He gave me birth 39 years ago and on September 15th, with the birth of Celeste, he made me born again' ".

These words deeply enclose the birth of Celeste and the birth of mother Morena, 39 years old and a journalist by profession.

Reportage from the delivery room: the birth of Celeste made me reborn (PHOTO)

Morena, 39, became a mother for the second time on September 15th. She had a vbac, a vaginal birth after a cesarean. "When Celeste was born I was reborn. Why ...

Celeste was born on September 15th at 21.20pm at the San Camillo Forlanini hospital in the city. A frugoletto of 3 kilos and 50 grams per 50 cm. Our photojournalist Anna Catalano, specialized in childbirth reportage, immortalized her emotion at her birth.

Our photo reports of childbirth in Del Paese
The birth of Morena is the seventh photo report dedicated to childbirth that we publish. In July they had met the twins Anna Laura and Fabio, in May we had witnessed the birth of the "eel" Marta, born in the maternity home in the city. Last March we told the story of Andrea and Chiara and their choice to manage the pain of labor without an epidural. In January, however, we had witnessed Chiara's birth and her choice for an epidural. In December Elena had given birth to twins and we were there, ready to photograph them. In November, however, we witnessed Pamela's birth and her pregnancy with lymphoma.

Five years ago Morena had "undergone" a caesarean for the birth of her first daughter, Ambrosia. A cesarean for health reasons, but that the mother never really accepted and metabolized.

Morena had not resigned herself and that caesarean. "I wanted to be a 360 ° mother and I still wore the wound of that birth". So when Ambrosia grew up and started getting urgent with her parents to be able to play with a little brother, Morena and her husband Francesco were convinced.

"When I found out I was pregnant I went to my retired gynecologist, Dr. Massimo Testi and I said: 'I'm pregnant again'. He gave birth to me, my daughter Ambrosia and all the members of my family for 40 years. . It was important that he was there. That he was present with me in the delivery room ".

At that point, the possibility of a vbac, (Vaginal Birth After Cesarean), a vaginal birth after having had a caesarean, arises.

What is a vbac
VBAC is an English acronym that stands for Vaginal Birth After Cesarean, or vaginal birth after a cesarean. The guidelines on caesarean section of the Higher Institute of Health are very clear and say that, in the absence of specific contraindications, the possibility of a VBAC must be offered to all women. This does not mean that all those who try will be able to have it, but the possibility of the so-called trial of labor (TOL, English acronym for trial of labor) must be given.

Although there were still health problems from the first birth and the husband and family were skeptical at first, they would try. "Of course my health and that of the child came first, but when my husband and I inquired about vbac we discovered a world."

"In our hospital we have all the professionalism to be able to do a vbac, a vaginal birth after having done a caesarean - explains Maria Giovanna Salerno, head of Obstetrics and Gynecology at the San Camillo-Forlanini Hospital in the city -, but not only. We also have the logistics to be able to do so. In these patients there is the risk of a possible rupture of the uterus and we are in a position to bring the future mother to the operating room in a few minutes.
The vbac is a procedure that is now being done more and more all over the world, but it is important to do it safely ".

The presumed date of delivery was 14 September. Celeste did not make herself want too much: on the 15th at 3 am Morena lost her mucous plug.

At 8 her water broke and she went to the hospital.

The actual labor began at around 14pm. "I screamed like crazy to get to 5 cm of dilation. Not having labored with Ambrosia, for me it was like having a first child. I did everything: bites, spits, kicks. do the epidural I'll throw myself out the window '- Morena remembers with a smile. - I just couldn't take it anymore ".

At a certain point, a figure came into play that changed everything. "A midwife took care of me, a wonderful woman who brought me to my destination, Marchetti".

Morena reached 5 centimeters of dilation by herself, then finally the much desired epidural arrived.

"It was two hours of peace and relaxation in which I was able to follow the relaxation techniques that I already know, since I practice yoga. I reached 10 centimeters in two hours".

After all the pain she felt, Morena is afraid. "I begin to push, worried. I remember the pushes, but also that nothing happened. After two hours and twenty of pushing I couldn't take it anymore. At a certain point I see the midwife talking to the gynecologist: I sensed that something was wrong. but luckily they didn't tell me what. I found out later: my daughter had a short umbilical cord. I pushed, but she came back up after each push. hair. But she didn't go out. "

"Now I have to add something: I have always talked a lot to Celeste in her belly. I had told her everything, about my deso for natural childbirth, about my reasons. deep connection. Celeste was late in being in position to be born and we didn't understand why she didn't turn around. Inside I had thought she might have her short cord and I had talked to her about it. And she did everything to facilitate this birth. She was my greatest ally. She has never even gone into fetal distress. This connection of ours has prevented her and me from having a caesarean ".

At one point the midwife dimmed the lights, took hot water and oil and said to Morena: "This has to be the thrust of your life. You have to do it. You don't have to try, you have to succeed. ".

And with a nice push, Celeste came out to her nose. Twenty seconds later, with the next contraction, she was born.

"Childbirth is an alchemy and that alchemy is created. If everything went well it is also thanks to my gynecologist who made me calm, to this obstetrician, but also to my husband" confesses Morena.

"When Celeste was born and they put it on my stomach, I didn't understand anything anymore. I started crying and I said: 'I did it, I managed to give it birth'".

Francesco, born to be the father of daughters

"When my husband picked up his daughter, he began to tell her a little bit of everything. He was born to be the father of daughters. After the first cesarean in Ambrosia I was in bed for a month and he taught me to change. the diaper, to treat the cradle cap, to bring the baby to me to breastfeed her.

"Celeste's birth was my rebirth"

"Despite the pains and trauma of labor for me it is it was a rebirth. I also made peace with the Ambrosia C-section - explains Morena. - Now I knew what I had to do and my problem was not an absolute contraindication to vaginal birth, but a complication. I am convinced. I have always felt that I would have made it also thanks to the people I had close to me.

even people who have health problems can do it.

And as a friend of mine says: 'after the marines there are the mothers! ' We are very strong ".

Read also: Morena also told about her birth on mammenellarete

About the photographer Anna Catalano

Anna Catalano, 37, is a professional photographer.
He has been shooting for more than 15 years, he studied photography and continues to update himself today.
In 2022 she became Giulia's mother. Since then her attention has focused on motherhood and childhood, telling it in an authentic way, trying to bring out and exorcise the most common cultural and social clichés linked to this universe, in disparate and often difficult contexts and contexts.
He collaborates with Del Paeseni magazine, hospitals, companies and individuals.
We at MyModernParents have chosen Anna to develop childbirth photo-reportage, to which she dedicates herself with professionalism, passion and great respect for the people involved.
On facebook: facebook.com/thestoriesreporter
Her instagram: instagram.com/annacatalanofoto

add a comment of Photoreportage: with the birth of Celeste, I made peace with the cesarean of Ambrosia