Plagiocephaly: how to prevent flat head in the newborn 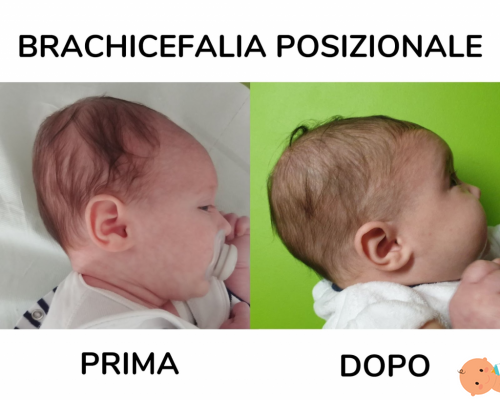 La plagiocephaly (or flat head) is when the baby has a flatter head on one side than the other and is caused by the position in which the baby is put to sleep.

In summary, his skull has taken the shape of a cradle or cot. As he states Doctor, specialized in emergency pediatrics and French author of the book A pediatrician for a friend (Mondadori), in bookstores from 20 July 2022, the child's skull is a bit like planet Earth: there are different tectonic plates and areas where they are welded, so they move.


It is the reason for the so-called "Drinking fountains" and sutures where the different plates of the bone will bond once the brain has stopped growing.

Plagiocephaly and craniosynostosis, how to distinguish

It goes without saying, although it is very rare, that in some newborns there may be sutures that close prematurely!

It is therefore necessary to distinguish the plagiocephaly caused by the early fusion of a suture (or craniosynostosis) and le positional plagiocephaly (because the child holds his head more on one side than the other or has a stiff neck!).

We will therefore talk about the concern of parents: the positional plagiocephaly, also called PP. Craniosynostoses are the responsibility of pediatric neurosurgeons.

Read also: Craniosynostosis: what they are, what they involve, how to intervene

Plagiocephaly, tips to prevent it

According to Toubib, if some believe that PP is a consequence of modern rules that require babies to sleep on their backs to prevent "cot death", the essence of the problem is not here. It is useless to question those rules, because if they avoid the risk of SIDS, they are welcome.

The point is that PP is a consequence of the child looking too often to the right or too often to the left. What to do then? You will therefore have to stimulate your baby as much as possible.

The first cure for PP (both to prevent its occurrence if your child holds his head too far to one side, and to heal it if it has already established) is positioning. When your baby has PP (whatever the severity), steps need to be taken to make him look the other way! Here are six tips from Doctor Toubib.

Read also: Health balances, what they are and when to do them

Plagiocephaly, what NOT to do

Read also: The newborn has a 'flat head': what to do?

A pediatrician as a friend

Toubib, author of the book A pediatrician for a friend (Mondadori Electa), is a doctor specializing in emergency pediatrics. In 2022 he created the very popular page Facebook To be or not Toubib with the aim of offering clear and concise medical information to parents whom he sees too often frightened arriving at the emergency room.

The book A pediatrician for a friend, which will be in bookstores from 20 July 2022, has the same ambition: to allow mothers and fathers to face the daily ailments of their child from 0 to 16 years, remaining lucid but knowing when to worry.

Toubib, A pediatrician as a friend, Mondadori Electa

TAG:
Plagiocephaly: the newborn has a 'flat head' ❯

add a comment of Plagiocephaly: how to prevent flat head in the newborn