Plagiocephaly: the newborn has a 'flat head' 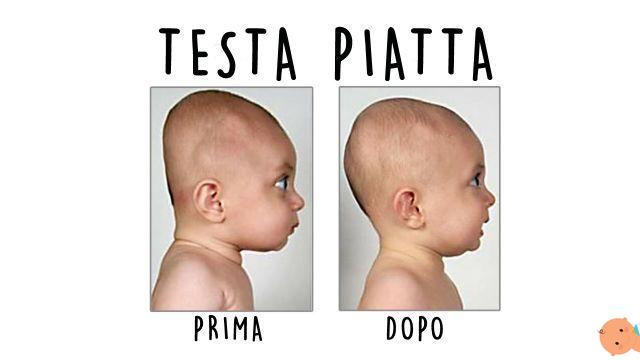 Plagiocephaly: the newborn has a flat head

La plagiocephaly o flat head it is caused by the position in which the baby is put to sleep. The classic belly-up position is recommended for fear of SIDS (Sudden Infant Death Syndrome), a phenomenon known as cot death. Since the American Academy of Pediatrics has come forward giving indications on the position of the newborn in the first months of life, the cases of SIDS have decreased but the cases of plagiocephaly have increased. Let's find out what it is, the causes, remedies and prevention.

(Photo gallery from Eltern.de, the first German magazine for parents)

The newborn has a 'flat head': what to do?

Plagiocephaly. This is the medical term for this type of infant deformity. Newborn flat head syndrome can have many different causes. Here's how to find a ...

Craniosynostoses are malformations of the skull and in some cases also face caused by anomalies in the bone growth. Sometimes, head shape abnormalities due to craniosynostosis may be evident from birth. Other times, however, the doubt that there is something wrong can emerge during periodic checks by the pediatrician - health balances - if the doctor finds, for example, that the head circumference it does not grow as it should.

Still other times it is the parents who become suspicious and ask for further information, for example if they notice any anomaly in the shape of the head or of the eyes (which can be very protruding) or in the anterior fontanel, which in the case of craniosynostosis tends to close earlier than expected.

Craniosynostoses are the responsibility of pediatric neurosurgeons.

Plagiocephaly: what it is

plagiocephaly or flat head of the newborn or infant is the crushing of an area of ​​the head, generally of the back and / or side.

But why does the baby have a flat head? It is rare for a newborn to be born with plagiocephaly. It can happen for multiple deliveries and for the position in the uterus. The most common cause in the infant is to be found in the same position of the baby's head over time and by the external pressure exerted on the bones of the skull.
In the first few months, the baby spends many hours lying on his back, generally with his head turned to the side. Even when placed on the baby food high chair or on a play mat, it tends to always rest its head on the same side. The bones of the cranial vault are still soft and more easily modifiable and malleable.

The safest position for the infant to sleep is in the supine position, face up. However, here are some tips to prevent plagiocephaly.

If plagiocephaly persists over time it is helpful consult the family pediatrician to know what to do and who to contact.

In some cases, especially abroad, doctors resort to cranial orthoses, the so-called "helmets", to facilitate the correction of morphological anomalies such as plagiocephaly or brachycephaly.
However, several studies have expressed doubts about the use of these corrective tools, both because they seem to produce limited improvements and because they are uncomfortable for children.

TAG:
Postpartum plank: what they are and how to do them correctly ❯

add a comment of Plagiocephaly: the newborn has a 'flat head'