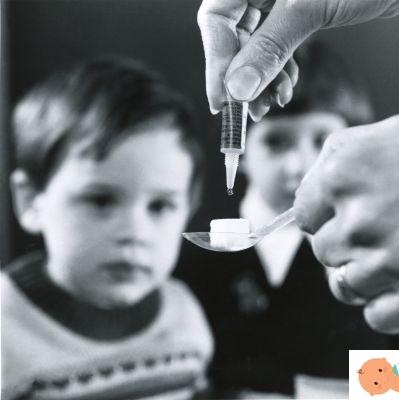 One of the vaccines that are given to newborns is anti-polio: let's see how the poliomyelitis vaccine, when to do it and what it is important to know.

Polio is serious infectious disease which particularly affects the cells of the nervous system. It is caused by the polio virus, of which there are three different strains - 1, 2 and 3 - although probably the only one still in circulation worldwide is type 1. It mainly affects children under five years of age.

The infection may be asymptomatic or manifest with mild, flu-like symptoms (fever, fatigue, headache). In some cases, however, it involves the onset of brain infections (meningitis) and paralysis which can also be permanent (this happens in about one case out of 200). If muscles important to vital functions, such as respiratory muscles, are affected, it can even be fatal.

How frequent is it

Thanks to the program of extensive vaccination developed by the World Health Organization (WHO), polio is a much less common disease in the world today than it once was, and entire areas - including the European region - have been declared completely free of polio.

According to reports from the WHO, it went from 350 cases in 1988 to 22 cases in 2022, with a decrease of over 99%. Polio is still present in countries such as Afghanistan, Nigeria and Pakistan.

The European region has been officially certified "polio-free" on June 21, 2002: in In the country, the last case of the disease was registered in 1982. Suffice it to say that not long before, in the XNUMXs, there were several thousand cases of disease a year in our country.

All thanks to vaccinations, therefore, and one might think that, given the success achieved, one could begin to stop the practice of vaccination. In reality we are not yet at this point: enough only one child affected to consider the disease - which is highly contagious - still active worldwide. Between 2009 and 2022, as many as 23 countries previously declared polio-free were reinfected by viruses imported from places where the disease is still present.

How the polio vaccine works

It is a inactivated vaccine, that is, obtained starting from killed viruses, and is administered with an intramuscular injection. It exists in single form or combined with other vaccines, in the so-called hexavalent (against diphtheria, tetanus, pertussis, poliomyelitis, Haemophilus influenzae type B, hepatitis B) and in the tetravalent (against diphtheria, tetanus, pertussis and polio).

Is the polio vaccine mandatory in the country?

In Del Paese, the polio vaccine is one of 10 Compulsory vaccines required by law.

Who should not be vaccinated or should postpone vaccination

Polio vaccination is contraindicated in children who have had one severe allergic reaction to a previous dose of the vaccine itself, or have severe allergy to any of its components.

The appointment with the vaccine goes postponed if you have moderate or severe illness (including severe vomiting and diarrhea), pending recovery. On the other hand, children with mild illnesses, such as colds or some line of fever, can be safely vaccinated.

Read also: Postponement of vaccinations: when is it necessary?

The risks of polio vaccination

Like any other drug, a vaccine can cause serious problems, such as a severe allergic reaction. However, the risk of polio vaccine causing serious problems is extremely small (less than one in a million cases anaphylactic shock): most vaccinated children do not have any type of reaction.

Most common effects after polio vaccination are pain and redness at the injection site and fever. Similar considerations apply to the combined formulations (hexavalent and tetravalent).

A slightly different speech should be made for another type of polio vaccine, the Sabin vaccine, obtained with attenuated (and not killed) viruses and administered orally. In fact, this vaccination involves a remote risk of transmitting the disease (it is estimated that one case every 500-600 thousand doses). But beware: it has not been used in Del Paese for many years and was withdrawn some time ago. This risk, therefore, is absolutely non-existent in our country, with the vaccine in use today.