Poliomyelitis: what it is, what risks it entails, how it is prevented 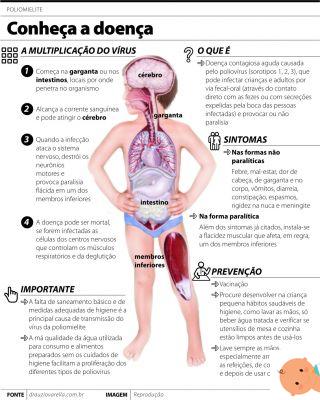 La polio is a severe infectious disease which particularly affects the cells of the nervous system. It mainly affects i children under five years of age. It is a disease now almost eradicated in Del Paese thanks to a widespread vaccination campaign: the last case diagnosed in our country dates back to 1982.

Polio is caused by the polio virus, of which there are three different strains - 1, 2 and 3 - although probably the only one still in circulation worldwide is type 1.

The infection may be asymptomatic or manifest with mild, flu-like symptoms (fever, fatigue, headache). In some cases, however, it involves the onset of brain infections (meningitis) e paralysis which can also be permanent (this happens in about one case out of 200).

If muscles important for vital functions, such as respiratory muscles, are affected, it can even prove deadly. Among children with permanent paralysis, the mortality rate is 5-10%.

How the contagion happens

The disease is extremely contagious. The contagion usually occurs for via fecal-oral route, through the ingestion of water or contaminated food, or through the saliva and droplets emitted with coughs and sneezing by sick people or healthy carriers.

How frequent is it

Thanks to the program of extensive vaccination developed by the World Health Organization (WHO), polio is a much less widespread disease in the world today than it once was, and entire areas - including the European region - have been declared completely free of polio.

According to reports from the WHO, it went from 350 cases in 1988 to 33 cases in 2022, with a decrease of over 99%. Polio is still present in countries such as Afghanistan, Nigeria and Pakistan.

The European region was officially certified "polio-free" on June 21, 2002: in Del Paese, the last case of the disease was registered in 1982.

There is no definitive cure for polio, although treatments are available to relieve symptoms, such as antispasmodic drugs to relax muscles and physiotherapy to promote mobilization of the affected limbs.

Because it can be dangerous

Because, although in rare cases, it can involve permanent paralysis and death.

The only effective prevention strategy is vaccination. In Del Paese, the polio vaccine is one of the Compulsory vaccines required by law.

It is a inactivated vaccine, that is, obtained starting from killed viruses, and is administered with aintramuscular injection. It exists in single form or combined with other vaccines, in the so-called hexavalent (against diphtheria, tetanus, pertussis, poliomyelitis, Haemophilus influenzae type B, hepatitis B) and in the tetravalent (against diphtheria, tetanus, pertussis and polio).

Since only one affected child is needed to consider the disease still active worldwide, it is not yet time to stop vaccination.

TAG:
Chicken: 15 tips for cooking it for children ❯

add a comment of Poliomyelitis: what it is, what risks it entails, how it is prevented