Positive pregnancy test with clear line: are you pregnant or not? 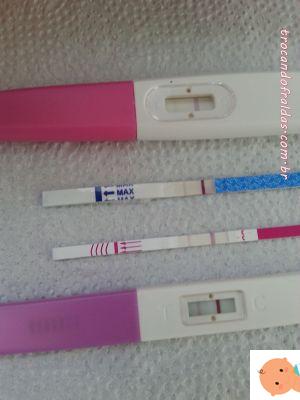 Delayed menstruation and that immediate thought: "Am I pregnant?". The first way to find out, as well as the simplest, is the pregnancy test that you buy at the pharmacy and also in other stores.

A disposable test stick that must be wetted with urine (according to the instructions on the package insert) and which establishes the presence or absence of beta-hCG, a fraction of chorionic gonadotropin, the so-called pregnancy hormone.

Sometimes on the tests you buy the clear words "Pregnant" or "Not pregnant" appear, but in most of the tests for sale they are "two lines" to indicate that the pregnancy is in progress. When the two lines are clear, the woman has no doubts: she is pregnant. But when one of the two lines has faded what should she think? Is she pregnant or is she not? Should I repeat the pregnancy test or not?

Let's find out in this guide how to interpret a positive pregnancy test with clear line.

Read also: Positive pregnancy test: 10 things to do right away

How the pregnancy test works

The pregnancy test is done on the urine, as anticipated, preferably with the first urination in the morning.

After having thoroughly washed your hands, you take the test out of its packaging, and place it for a few seconds under the stream of urine. Alternatively, you can pee in a sterile container and dip the stick up to the indicated line, waiting for the seconds indicated.

In each package you will find instructions for carry out the pregnancy test correctly. In most cases, a single line indicates that the woman is not pregnant, while two indicate that she is pregnant. Alternatively, the most modern tests show the words "you are pregnant" or "you are not pregnant" or the happy and sad face depending on the outcome (positive smile test, sad negative test).

Carrying out this type of test is absolutely simple and disposable test sticks are easily found in pharmacies, supermarkets and other personal care stores. There are also packs with two tests inside to be able to repeat it twice in case of doubt.

Positive light line pregnancy test: how to interpret it

It may happen that when taking the traditional pregnancy test (the one with 1 or 2 lines), the second dash is lighter than the other, not very visible or faded. This usually generates some doubts in the expectant mother. Will she be pregnant or not?

When the line, albeit faded, is present, the pregnancy test must still be interpreted positively, but to be sure the woman can return to carry out the test a few days later. If a few days have passed since your period has been delayed, your pregnancy is at the very beginning and your Beta-hCG level may still be too low and this could be the reason for the second clear line.

To eliminate any doubts, there are two things to do:

Sometimes, however, you may be faced with a false positive. In this case, surely going for a Beta-hCG blood test is the best solution to have a certain answer and eliminate any doubts.

The Beta hCG test is a normal blood draw and the response arrives within the day. In addition, the woman can monitor if there are some of the symptoms typical of the first weeks of pregnancy, in addition to the delay of the menstrual cycle. Common symptoms are usually:

If the disposable pregnancy test does not give a clear result right away and the woman has doubts, therefore, it is good to investigate, perhaps also asking for advice from your gynecologist.

Faded line: what are the causes?

Summarizing, therefore, the positive pregnancy test with clear line it can be generated by various causes. Most of the time it still indicates the beginning of a pregnancy, but if in doubt the woman can choose to repeat it or go directly to the blood sample.

To clarify, we list what are the reasons that can cause the release of that faded line:

Pregnancy test, when to do it and which one? ❯

add a comment of Positive pregnancy test with clear line: are you pregnant or not?