Postpartum plank: what they are and how to do them correctly 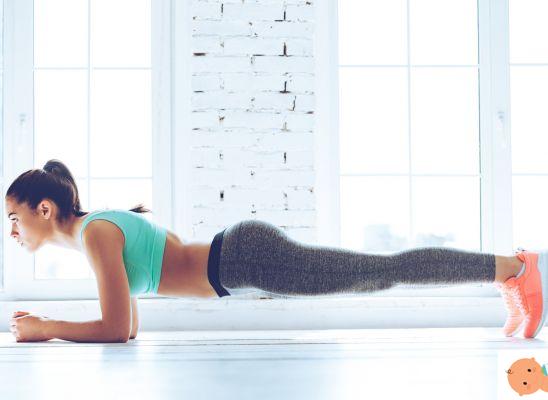 After pregnancy, all mothers want to get back in shape soon. Breastfeeding and the daily movement that the baby makes the new mother do helps a lot in this, but a little healthy and balanced exercise is also an important aid.

By first asking the obstetrician or gynecologist for advice and being followed by a personal trainer in presence or online, there are several exercises that you can carry out safely, sometimes even together with the newborn. One of them is the plank.

So let's find out all about the postpartum plank. How to do it correctly and what are its benefits:

Read also: Physical activity after childbirth, after how much and how to get back in shape

What is the plank

Il plank it is the basic exercise for training the core (abdominal wall and lumbar area). It was born as an isometric exercise and aims to train the stabilizing phase of the spine by the rectus abdominis.

In addition to its basic static position, the plank allows you to create different variations, such as the transition to three supports, up to two.

Il plank, which means table, takes place like this:

The exercise consists in maintaining the position for as long as possible.

How long after giving birth can the plank be done

New mothers shouldn't be in a rush to get back in shape after childbirth. The body will need its time to recover and return to what it was before. But there is also no reason to be afraid of physical activity, as long as everything is done safely and asking the advice of the gynecologist.

In general, however, immediately after giving birth the woman loses 6 kg, between the weight of the baby, the placenta and the amniotic fluid. Then the weight loss stabilizes over the next 10 weeks. Her body, in fact, in this time, eliminates all the water retained during pregnancy and, if the woman has gained the right kilos, at the end of the puerperium she will be back in shape.

Exercise at this stage can help. But expert opinions suggest starting no earlier than two weeks after giving birth and always gradually. Before getting back to physical activity it is important to check that the diastasis of the rectus abdominis, that is the separation of the abdominals that occurs during pregnancy, has partially closed.

Just a simple walk with the wheelchair can help in the post-partum period. To start playing plank or other exercises better consult the gynecologist.

The benefits of the plank after pregnancy

I benefits of the plank they are many. The plank is an exercise that, even if performed in isometry, makes the whole body work. In fact, it involves not only the abdominal and lumbar muscles, but also the muscles of the legs, arms and shoulders.

Choose to do a workout with plank (and variants), therefore, involves more muscle groups, allowing women to get back into shape more quickly, effectively and satisfactorily after a pregnancy.

As regards, specifically, the rectus abdominis (the area that undergoes the greatest change with pregnancy), the plank trains the function of stabilizing the spine.

Understand what you are doing a plank incorrectly it is quite simple. In fact, if you do not take the correct position, you will immediately begin to feel discomfort and pain in the lumbo-sacral area of ​​the spine.

Precisely this annoyance must act as an alarm bell and stop the new mother or whoever is performing the plank. There are, therefore, no major post-exercise risks. The discomfort - if the plank is being performed incorrectly - manifests itself immediately.

The convenience of the plank is that it can be performed by the new mother even at home, while the baby is asleep or when he is awake in the pram or in the bouncer next to her.

add a comment of Postpartum plank: what they are and how to do them correctly