Pregnancy symptoms: the 10 most frequent 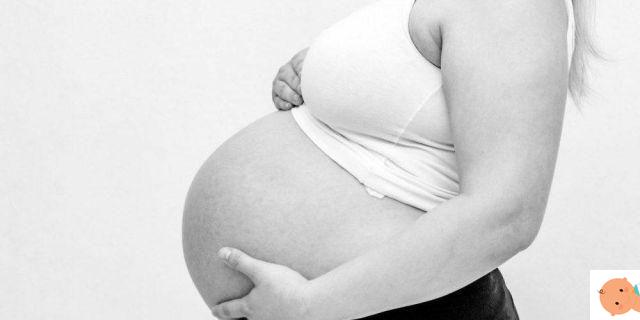 There are those who suffer from nausea, those who have an incredible sleep. There are those who can't stand some smells and others who have severe pain in the breasts. Some experience implantation leaks, while others have all the signals of the cycle but do not see it appear. And there are also women who are so well that they don't even think they're pregnant. It is evident that pregnancy symptoms are not the same for everyone and it is also difficult to say for sure when the first symptoms of pregnancy appear. So let's see which are the most common and some remedies to minimize discomfort.

Symptoms of pregnancy: the absence of menstruation

In medical jargon it is called amenorrhea. The causes are many: stress, hormonal dysfunctions, menopause, significant weight changes, eating disorders. When looking for a baby, however, the absence of menstruation is the first important "alarm bell" that indicates that the pregnancy has probably begun.


When deciding to have a child, it is therefore important to keep the menstrual cycle under control. In fact, the first day of the last menstruation is used to establish when pregnancy begins and, above all, to calculate the presumed date of delivery. So you have to keep it in mind.

Symptoms of pregnancy: nausea and vomit

Between i most common pregnancy symptomsi there is nausea, very often accompanied by vomiting. For some mothers, nausea and vomiting are among the first symptoms of pregnancy, while in others they appear later, around the fifth or sixth week. Others (the luckiest) will never find out what we are talking about. Nausea occurs mainly in the morning, but it is not a rule: unfortunately there are those who suffer from it at other times of the day, if not all day. The fault lies with the beta hormone Hcg. The body produces it after conception and peaks around the twelfth week, and then slowly declines. That is why in most cases nausea and vomiting disappear after the first trimester.

What are the remedies for nausea in pregnancy? Unfortunately, there is no valid advice for every woman because it is all very subjective. Each goes by trial and error until she finds ways to best manage the ailments. What you should try to do is not to stay too long on an empty stomach because it is a situation that makes nausea worse. So yes to small snacks every now and then. Some foods should also be privileged over others. Another idea is that of bracelets for motion sickness: by applying pressure to a specific point of the wrist, they relieve the symptom.

There are also several medications and supplements suitable for pregnancy nausea, but only the gynecologist must prescribe them. Ask him for advice.

Symptoms of pregnancy: sleepiness and fatigue

Sleepiness is one of the most common pregnancy symptoms and generally occurs in the first few weeks. At the base are the hormonal and metabolic changes that pregnancy involves. The urge to sleep can also make it difficult to concentrate, for example at work.

The feeling of exhaustion goes hand in hand with the previous one and, even in this case, lasts a while. In general, the entire first quarter is characterized by this desire to "do nothing". Usually, the middle part of pregnancy, the second trimester, is where you feel best, while fatigue may reappear in the third trimester, when the belly becomes bulky and it is difficult to move.

Whenever possible, try to rest. This is the only remedy. However, it is correct to check that there is no particular deficit (for example an iron deficiency). In this case, the gynecologist will give the most appropriate therapy.

Not all of them have them, but they are quite common. In most cases, the small blood loss (spotting) results from implantation of the fertilized cell in the uterus. When this happens, there may be a little bleeding. And in fact we are talking about plant losses. Generally, they are much lighter and less abundant than a menstrual flow, albeit with differences from woman to woman. Implant losses usually occur 6-12 days after conception and are short-lived. However, they certainly fall within the early symptoms of pregnancy.

The sensation is the one that more or less all of us feel before the arrival of menstruation: sore and turgid breasts due to hormones. In almost all women it swells immediately and thus becomes one of the first symptoms of pregnancy. At the same time, the breasts become extremely sensitive, so much so that they cannot be touched and that they feel discomfort even with the simple contact of clothes.

As the weeks go by, changes also occur in the nipples and areola. They become larger and darker. Some very small growths may also appear on the areola: these are the so-called Montgomery tubercles. From mid-pregnancy onwards, a few drops of colostrum, the first milk, may come out of the nipples. But do not worry if this does not happen: it does not mean that you will not be able to breastfeed.

From the beginning it is advisable to use bras for pregnancy, possibly without underwire, in natural fabric and with wide straps.

Even those who have never had any problems could undergo some intestinal changes: due to hormones, constipation may immediately appear among the first symptoms of pregnancy, but even a few episodes of diarrhea are not uncommon.

Between diarrhea and constipation, the latter is more common during gestation and, as mentioned, can be one of the early pregnancy symptoms. The causes are many: hormonal changes (especially the increase in progesterone), changes in eating habits (for example nausea makes it difficult to drink), the weight of the belly and so on.

Nutrition plays a predominant role in fighting constipation. Vegetable fibers and water are the best allies in trying to solve the problem. The risk is that hemorrhoids can appear. And there are pains!

Going from wild laughter to crying can be one of the symptoms of pregnancy. With a lot of wide-eyed partners who just don't know what to do and how to take you! The hormonal changes that occur as early as conception have a very strong influence on the psyche (already complex in itself) of a woman. Irritability, moodiness, sadness alternating with cheerful and euphoric moods may indicate that the pregnancy has begun.

At the beginning of a pregnancy you may find yourself between two extremes: starvation to death or total loss of appetite. The second is often linked to nausea which, especially in the first few weeks, can cause a lot of discomfort. Many women, on the other hand, immediately experience an increase in appetite, even with particular "cravings". In reality, there's no serious scientific explanation for cravings, but maybe they're just a way to get pampered more.

When you are very hungry, you shouldn't let yourself go and give in to any temptation. Gaining excess weight has several negative consequences, including the higher risk of getting sick from certain diseases, such as gestosis. In short, you shouldn't "eat for two", also because getting rid of extra kilos after childbirth is not a walk in the park.

Something strange can happen during pregnancy: you begin to hate some foods that you used to adore and vice versa. There is no scientific basis, but it happens. In addition, the sense of smell could become much more refined. Smells and scents that you used to like can suddenly make you sick, to the point of making you sick or even vomit. For many women this can be one of the first symptoms of pregnancy, so much so that they decide to get tested.

Abdominal pain in early pregnancy can be associated with either intestinal disorders or be similar to menstrual pain. It is not uncommon, in fact, that, before discovering that she is pregnant, a woman perceives the whole "package" of premenstrual symptoms: stomach ache, breast tension, nausea, headache are mistaken for "cycle coming", when instead that's how it is.

Transparent discharge in pregnancy is the main sign of the so-called leukorrhea gravidarum. Sometimes it is one of the symptoms of pregnancy before the period. It simply results from the thickening of the vaginal wall, a normal phenomenon after conception.

It is always advisable to consult your gynecologist when the discharge gives off bad smells and is accompanied by itching or burning. These could be signs of an infection (such as candida) that needs to be treated.

D. How long after conception can I feel the first symptoms?

A. Obviously when the first symptoms of pregnancy appear it depends on each woman. Typically, delayed menstruation (amenorrhea) occurs about 10 days after fertilization. The other symptoms begin to be felt from the fifth to sixth week, approximately 3-4 weeks after conception.

Q. Is it possible that vomiting is a symptom throughout pregnancy?

A. Yes. Also, when the vomiting is very intense it is called hyperemesis gravidarum. Often it is necessary to rehydrate the expectant mother with drips because the loss of fluids can lead to dehydration.

D. I pee very often. Could I be pregnant?

A. Yes. Pollakiuria depends on two factors: the increased amount of blood circulating and progesterone. This hormone relaxes the bladder muscles, making it difficult to hold urine.

Q. Do I have to start folic acid as soon as I feel the first symptoms of pregnancy?

A. Actually it should be started earlier, that is, as soon as you start having unprotected intercourse. Folic acid is very important for the prevention of neural tube defects and is recommended already in the preconception phase.

Q. Is it true that with twin pregnancies you suffer more from nausea and vomiting?

A. It can happen. The reason is that the production of beta Hcg is higher and, consequently, the pregnancy symptoms are more intense.

add a comment of Pregnancy symptoms: the 10 most frequent