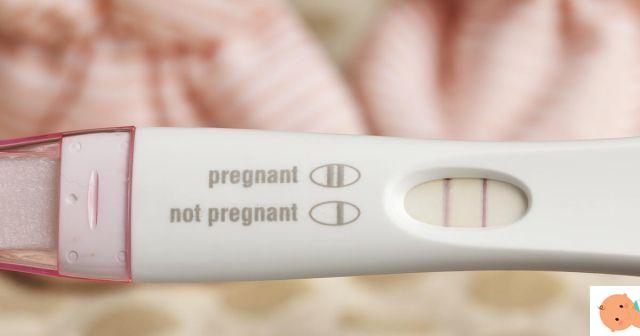 Emotion, fear, impatience, sense of inadequacy, irrepressible joy: how many emotions and moods alternate at the time of making a pregnancy test: but those that are bought in every pharmacy and even in some supermarkets they are truly effective? What if the answer is incorrect, that is a false positive or negative?

Gabriele Trent, president of the SC of Obstetrics and Gynecology, as well as first level medical director at the obstetrics and gynecology of the Santa Maria Nuova Archispedale - IRCCS of Reggio Emilia, explains everything you need to know on pregnancy tests.

Are the tests reliable?

The first question one might ask is whether home pregnancy tests are actually reliable. Trident reassures: "The tests to be done independently at home are reliable, but I generally advise to be wary of those who boast a very high precision ». To be clear, these are those that promise to identify a possible pregnancy even a few days before the expected date for menstruation.

«The best home tests are those to do from the first day of the missed period, that is, with an average sensitivity. In the end, the most "basic" tests are those most used also in the emergency room and boast 90% accuracy ».

Pregnancy test, when to do it? Responds in this podcast, gynecologist at the Policlinico San Matteo and professor at the University of Pavia.

How do you read a pregnancy test

Having established that you can be sure to take a home pregnancy test, it can happen that the reading is not as simple as you would expect. Two dashes should appear on the display to confirm that the stork is in flight (although the pregnancy confirmation mode can change from test to test) but it can happen that it is difficult to distinguish them and only one is marked, while the other is only as a slight shading.

«In the event of a doubtful answer, if the dashes are very light or if the result is unclear, the test is considered positive»Explains Trident. «In the hospital or in the emergency room, in case of doubtful tests it is done also a blood test to be sure. The blood test detects the amount of Beta-hCG present, which is the hormone produced by the embryo and which guarantees its survival by delaying the regression of the corpus luteum and thus preventing menstruation. Even in a home situation of doubt, it is possible to have a blood test carried out in an analysis laboratory. An investigation which, by the way, is also covered by the National Health Service».

In this way you can have the result within the day, if you really can't wait to have a certain answer. If, on the other hand, there is no particular rush, you can easily wait a couple of days and then redo the home test.

If you need an official document

Who needs aofficial certificate of pregnancy, for example a worker who works in a sector at risk and must be put at home immediately, can do both a blood analysis and a urine laboratory test: in both cases they are nominal tests, which apply to everyone the effects for the gynecologist who has to do the certification.

Are there false positives or not?

Trident answers the question by confirming that the risk of false negatives is greater. «I false positives are limited to very rare cases, as ovarian neoplasms which produce Beta-hCG, which is actually produced by the placenta and is the hormone read by pregnancy tests. Other possible causes of false positives are i drugs that stimulate ovulation, usually used for assisted fertilization. In this case, however, the laboratories that carry out this procedure are very clear in practice and are extremely careful not to take a test too soon, risking to detect the Beta-hCG dosage of the drug and not that of the pregnancy. Furthermore, literature has shown that there is a higher incidence in peri- and postmenopausal women. In these cases the Beta-hCG is basically higher than normal, and in very sensitive tests it could be read as being caused by pregnancy. Better be very careful and repeat the test.

Even after an abortion, whether spontaneous or voluntary, a queue of positivity can be detected even 20-25 days after the interruption ».

Read also Negative test, but pregnancy is there: that's why it happens

What could skew test results and generate a false negative?

Since false negatives may be more frequent, the doctor explains what to do if you are inclined to believe that conception has occurred, despite the fact that the test did not return an affirmative answer. «In these cases it is always prudent to repeat the test after a few days. Conception may have been later than expected: in the case of a regular cycle, ovulation occurs around the 14th day and the implantation of the fertilized egg around the 21st -22th day, but in the case of a long and irregular cycle the ovulation could take place past the 14th day and consequently the missed period on the 28th day may not necessarily be linked to a pregnancy. Generally a irregular cycle makes it more difficult to recognize the date of ovulation and, in chain, the expected date of menstruation, conception and therefore when it is the right time to take the test. The main problemin fact it is be sure of conception, which is calculated based on the last menstruation taking into account ovulation on the 14th day and menstruation on the 28th day precisely. Tests that promise to detect pregnancy even before the missed period may be unreliable simply because the time of ovulation and possible conception has not been correctly identified. To avoid such a false negative, I always recommend wait for the expected day of menstruation or the first day of delay.

Also 'use of hormonal contraceptives, breastfeeding or threats of miscarriage not known could falsify things ».

How to carry out the test correctly

One way to avoid a false negative is to be extremely accurate in the execution phase. Gabriele Tridenti gives some advice to probable future mothers: «It would be better test with first morning urine, because there is the maximum possibility of a good concentration of Beta-hCG. If it is done in the evening, but it is reasonable to think that there may have been conception, the test cannot be considered closed, but must be repeated. Attention also to the technical and practical difficulties of carrying out the home test. The simpler a pregnancy test is (such as those that must be positioned under the jet of pee) the better the result will be read ».

Read also: The first super-early pregnancy test arrives, to be done on blood at home

After how many days can you take the pregnancy test?

The pregnancy test is a simple and effective tool to find out if you are pregnant. It can be done 4/5 days after intercourse, although it is advisable to wait at least a week to avoid false negatives.

How is a pregnancy test done?

Home pregnancy tests are very simple to perform: you have to put the appropriate strip for a few seconds under the stream of urine, or immerse the stick in a clean container, where you will have collected the urine.