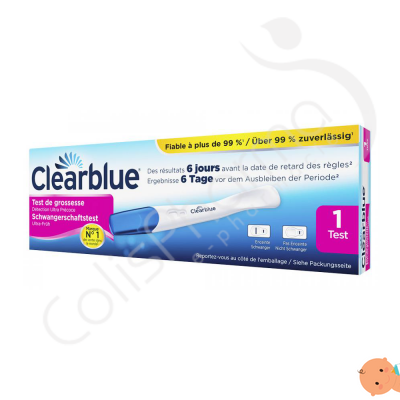 Since 2022, Del Paeseno First to know has arrived on the market, the first home pregnancy test on blood (instead of urine). This test promises to provide a reliable answer to the question "Incinta o no? "already 7/8 days after the presumed conception, therefore around the 21-th or 22-th day of the cycle (in the case of regular 28-day cycles). in the pharmacy, it does not require a prescription and costs approximately the same as a DIY urine test.

According to reports from the manufacturer, the American Now Diagnostics, the test would be particularly accurate, with a very low general risk of false positives or false negatives comparable to that of laboratory tests, performed starting from a blood sample. Moreover, compared to the classic urine tests it allows anticipate a few days - up to a week - the possibility of discovering a pregnancy in its very early stages.

Read also: Positive pregnancy test, 10 things to do right away

The test does nothing but detect the presence or absence of beta-hCG in the blood, human chorionic gonadotropin or pregnancy hormone, produced by the cells that will give rise to the placenta when the fertilized egg implants itself. In practice, what the urine test does, only instead of detecting the possible presence of beta-HCG in the pee it does it in the blood, with the advantage of "seeing it" a few days earlier and being even more accurate.

From a practical point of view, it is very similar to do-it-yourself test for blood glucose measurement: with the lancing device (a kind of pin) a small prick is made on a fingertip, and squeezed a little to release a drop of blood. At this point, the test stick is brought close to the drop of blood, to load it into a special channel which must be completely full. You put the test on the plane, wait 10 minutes and that's it: if only one line appears it means that you are not pregnant, if there are two that you are.

“Despite the little discomfort of the prick on the finger, it could be more convenient and faster of the classic urine test, also because it does not require you to go to the bathroom or wait for particular moments of the day "comments the gynecologist Elena Zannoni, of the Fertility Center of the Humanitas hospital in Rozzano (MI). "On the other hand, those who want to do it but consider it more complicated than the other, could do it directly in the pharmacy, with the help of the pharmacist”Adds the gynecologist Valentina , freelance in the city.

The test can be done already 7/8 days after the alleged conception, at least in the case of women who have a regular cycle. "If the cycle is irregular and tends to be longer, doing it so early could give false negatives," Zannoni points out.

However, it does not mean that it must be used to discover a possible pregnancy in advance: it can be used safely later, in case of missed menstruation and as an alternative to a urine test. "In this case the advantage should be one greater accuracy"states (who is also the author of some of the product website texts).

"It happens that a urine test done on the first day of missed menstruation is still negative even if there is a pregnancy, because perhaps ovulation and therefore conception occurred later than expected: in these cases, the blood test should immediately give a positive result ".

"And again - he continues - the test could be used as a check instead of the one on blood performed in the laboratory, in the event that the woman has any doubt about the result of the do-it-yourself urine test".

But be careful: the test can be falsified if they have been used drugs containing beta-HCG, for the induction of ovulation in medically assisted procreation paths. In these cases, gods may occur false positives and it is best to wait at least two weeks after taking the drug before taking the test.

Many women who are looking for a pregnancy can't wait to know if that long-awaited event has finally arrived: for some of them, knowing it a few days in advance of what was possible to do so far, at least at home, could represent an advantage, in terms of reduction of anxiety. The same goes for those who undergo in vitro fertilization procedures: the next step after the embryo transfer is the beta-HCG test on blood, to be performed in the laboratory two weeks later: some could be more calm by anticipating a few days. the test at home. But be careful: "This is not necessarily the case for all of them. On the contrary, often the effect of such early tests is the opposite, that is a increased anxiety, with a spasmodic and frantic wait for the day of the test "underlines Zannoni.

And also the gynecologist and endocrinologist , head of the PMA center of the San Matteo University Hospital in Pavia, underlines some critical issues regarding the use of the test as an extremely early detection tool for pregnancy in "normal" conditions. "The problem is that very often it happens, in nature, that the pregnancy starts but stops almost immediately, even before the woman has the opportunity to realize that it was there. We talk about biochemical pregnancy and it is an absolutely physiological and common phenomenon "explains the expert.

"The risk of taking a test too soon is twofold: first and foremost fool yourself at all, because you are convinced that you are pregnant and instead, more or less punctual, the menstruation arrives. But most of all convince yourself that something is wrong. If the phenomenon is repeated perhaps two or three times, one can think of suffering from polyabortion when instead - I repeat - we are faced with a rather common event ".

Nappi summarizes: "It is one thing to use the test if for some reason there is a clinical suspicion of infertility due to extremely early miscarriages. In this case it could have an undoubted usefulness. Another thing, however, is to use it only to try to intercept a possible pregnancy as soon as possible, and then it risks being counterproductive ".

Without prejudice to these cautions, there are some specific situations in which the use of an early test could be particularly useful. Valentina sums them up:

Read also: Drugs in pregnancy: which are allowed and which are forbidden TAG:
Positive pregnancy test: 10 things to do right away ❯