Pregnancy test, when to do it and which one? 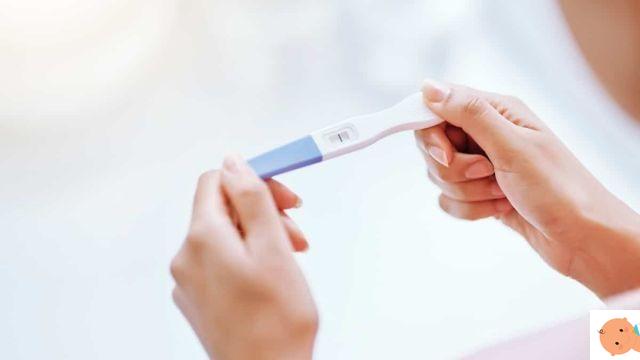 To find out if you are really pregnant, the simplest and most immediate method is the home pregnancy test, which can be purchased at a pharmacy or supermarket and allows you to have the answer in a few minutes. The urine test in the laboratory is identical to the do-it-yourself test.

Confirmation of pregnancy is given by detection of human chorionic gonadotropin (hCG) in urine, a hormone that is produced by the trophoblast, that is the first sketch of what will later become the placenta, starting about seven days after fertilization.

Is the pregnancy test positive? When? What if the line is light? It may happen that the reading is not as simple as one would expect. On the display they should ...

You can do the do-it-yourself pregnancy test from the first day of your menstruation delay, which corresponds to approx two weeks after conception if you are pregnant. Some particularly sensitive tests can also be used a few days before the date you are waiting for menstruation.


It is not necessary to perform the test in the morning: it it can be done at any time of the day. The operation is very simple: just place the test strip under the urine stream for a few seconds, or dip it into the urine collected in a clean container. The package insert clearly explains how to interpret the result you see appearing on the strip, and this applies to both classic and digital tests.

There is also the possibility of carrying out a blood test in the laboratory, detecting the presence of a fragment of the hormone, the so-called beta-hCG.

The blood test, to be performed in the laboratory, is earlier compared to that of urine and can be done as early as seven to ten days after the presumed conception. The answer usually arrives within the day or after about 24 hours.

In addition to detecting the presence of beta-hCG, the blood test also measures the amount of this hormone, which varies from week to week, so it is often thought that the results of this test can be used to date theepoch of conception. "To tell the truth, however, the beta-hCG levels are not easily interpretable due to the considerable range of values ​​that can be found in relation to the evolution of pregnancy" underlines Stefano Bianchi, head of obstetrics and gynecology at the San Giuseppe Hospital. of our city.

“It should be done at least two - better three - dosages at a distance of two / three days from each other in order to be able to make a dating with good approximation, but in any case these dosages have no real diagnostic capacity (except in the sense of saying that there is a pregnancy or not) , unless you also have a ultrasound feedback. Women do it willingly because they want a "quantitative" answer to the question "how's the pregnancy?", But in reality the beta hCGda alone can't tell.

For this reason, this examination is only really recommended in particular cases, for example after assisted fertilization or if an ectopic pregnancy or abortion is suspected.

Sources for this article: National Health Service of the United Kingdom (NHS) and advice from Stefano Bianchi, director of the Gynecology and Obstetrics Unit of the San Giuseppe Hospital in our city.

add a comment of Pregnancy test, when to do it and which one?