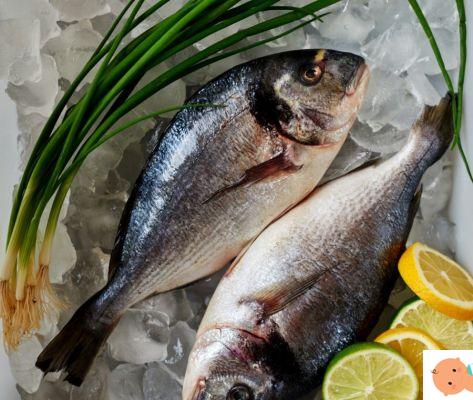 During pregnancy it is essential to eat correctly, preferring quality foods in the right measure. This does not mean that you have to undergo a strict diet, but that it is only advisable to pay a little more attention to what you put on your plate.

In particular, according to Angela, a nutrition biologist expert in pregnancy nutrition and research collaborator at the Clinic in our city, "it would take a little less than 300 kcal per day more than when you were not pregnant: the equivalent of a packet of crackers, a fruit and a teaspoon of oil or half a sandwich and a glass of skim milk ".

What about fish in pregnancy? The fish it is one of the foods that characterize the Mediterranean diet and it is important, as it contains omega 3 and proteins. But in what quantity to take it when you are pregnant? Which types is better to favor? Are there any contraindications? Here is a series of detailed insights on this.

Benefits of Eating Fish During Pregnancy

The benefits of consuming pregnant fish are the following:

In the diet of a pregnant woman, fish is essential because it does not contain only fish protein with high biological value, but also polyunsaturated fatty acids (the famous omega 3), which are really important for the correct development of the fetal nervous system. It is therefore necessary to include fish in the diet at least two or three times a week. But let's find out more about the benefits of fish during the gestation period.

In particular, according to a Spanish study, 3 or 4 portions of fish per week (600 grams) would be le perfect quantities to be taken during pregnancy. These quantities could appear high and dangerous for the relative amount of mercury, yet according to research they can be consumed without fear of negative consequences due to the presence of pollutants.

The researchers, led by Jordi Julvez, of the Center for Research in Environmental Epidemiology in Barcelona, ​​followed almost 2000 mother-child couples from the beginning of pregnancy until the baby's fifth birthday. The sample studied showed a high consumption of fish, ie about 500 grams per week on average.

It turned out that for consumption that exceeded i 340 grams per week, they have increased as well cognitive test scores, and fewer those attesting the presence of traits of the autism spectrum.


It was also found, of course, that mercury levels were higher in the umbilical cord blood of babies whose mothers had eaten more "at risk" fish, but it was found that this mercury did not adversely affect children's development. Therefore, it seems that, up to certain quantities, the beneficial substances present in fish are able to compensate for the negative consequences of toxic substances.

Read also: Fish in pregnancy? The development of the fetal brain has an edge

What fish to eat during pregnancy

The consumption of fish during pregnancy provides all types (in portions of 100-150 grams): from the leanest and most digestible like

It is appropriate though do not consume large fish more than once a week, such as, precisely, tuna and swordfish, to minimize the risk of contamination with pollutants such as mercury, which are more present in these foods.

During pregnancy it is advisable to eat especially the blue fish

main source of omega three fats, which are essential for the development of the fetal nervous system, as well as an excellent source of vitamin D.

Raw fish and sushi during pregnancy

According to Angela "pregnant fish should be eaten well done in order not to risk food poisoning such as hepatitis A or Salmonella. "If we want to consume it raw, we must be sure that it has been thermally blast chilled in the right way, that is, frozen in a domestic freezer at -18 ° C for at least 96 hours, or in a commercial freezer at -20 ° C for at least 24 hours.

Therefore, the consumption of raw fish (including sushi) and especially in pregnancy is always recommended due to the risk of contamination with:

It is therefore better to avoid consumption, unless you are absolutely certain that the fish has been thermally slaughtered and that after treatment it has been kept in perfect hygienic conditions.

It is difficult to be sure of the treatments performed when eating away from home. At home you can have greater control of the situation, but it is necessary to keep in mind that the freezer does not always reach -18 ° C.

Smoked fish and salmon in pregnancy

The same goes for sushi raw salmon, which is always not recommended due to the risk of contamination with viruses, bacteria and other parasites. Unless you are totally certain that the fish has been thermally slaughtered and that after treatment it has been kept in perfect hygienic conditions.

The risk also exists in the case of smoked or marinated salmon. In fact, treatments such as marinating and smoking of salmon can reduce the risk of contamination by parasites, but they do not completely eliminate it.

For this reason, to be really calm it would be better to avoid smoked salmon or marinated with lemon or vinegar, unless you are sure of thermal reduction and maintenance in perfect hygienic conditions. Furthermore, smoked salmon is more at risk of contamination with Listeria monocytogenes.

Finally, it is definitely best to eat the salmon only if it is well cooked, in order not to risk food poisoning.

Read also: Salmon in pregnancy. It's possible to eat?

Large fish, including the tuna and swordfish, they accumulate greater amounts of mercury in their tissues than other medium or small fish. For this reason it is advisable not to take it in large quantities, to avoid ingesting mercury and substances that can be toxic to the fetus.

Consumption of tuna and swordfish during pregnancy it is not forbidden, but it has to be limited, preferring other types of fish (such as the blue one).

It is appropriate to eat it no more than once a week in order not to lose the precious nutritional qualities of fish, especially during pregnancy, when the intake of polyunsaturated fatty acids of the omega 3 series (docosahexaenoic acid DHA) are essential for the development of the fetal nervous system.

However, it is important do not exceed the quantities of salt (which always abound in preserved products).

Read also: Pregnancy and canned tuna, can you eat it?

Can I eat fish when pregnant?

Yes, because it contains proteins and omega three. It is possible to consume it three / four times a week. But pay attention to the type and how it is consumed

Can i eat sushi when pregnant?

It depends. It is not recommended. It is only possible if certain conditions are met.

Can I eat smoked salmon when pregnant?

It depends, in most cases it is not recommended.