Premenstrual spotting or pregnancy: how to recognize leaks 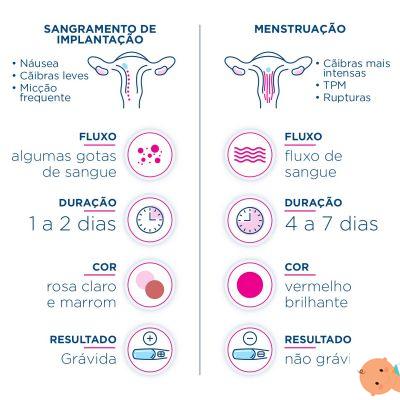 Looking at the underwear, you can notice some small brown spots. It's not time for your period yet, so what's going on? This is likely to be spotting, which is very light bleeding that occurs outside the normal menstrual cycle. Maybe you just need to wear a panty protector.

Spotting can range in color from light pink to dark brown. The brown spot gets its color from old blood, which can start flowing out of your body a week or two before your period starts. For some, this is just a normal part of their cycle. For others, it may be a symptom of an underlying health condition.

Here's a look at the potential causes of brown spots and other symptoms to watch out for.

The brown spot is often just a sign of ovulation or the onset of your period. This is completely normal and there is nothing to worry about.

Ovulation
If you have brown spots that start two weeks before your period, it could be a sign of hormonal changes related to ovulation. Typically, you ovulate about 10-16 days after the first day of your last period. This is when your ovaries release an egg for fertilization. Ovulation occurs when estrogen levels are high. These fall off after the egg is released. This decrease in estrogen can cause bleeding and spotting.

Your cycle
Sometimes, brown spots are just a precursor to the cycle. Brown blood or discharge may be the remains of old blood that was never completely shed from your uterus the last time you had your period. This is usually not a cause for concern. But if you regularly have very short cycles that last only about two weeks, it's best to see your doctor.

If you use hormonal birth control, the brown spot can be a sign of breakthrough bleeding. This is the bleeding that occurs between periods as your body adjusts to hormones. You will likely experience some spotting and breakthrough bleeding in the first three to six months after starting a new method of contraception.
It is especially common if you are taking a birth control pill that does not contain estrogen. Brown spotting can also occur if you take birth control pills and miss some doses. Once you get back on schedule with your pills, the spotting should go away.

Implantation losses are menstruation-like bleeding that occurs in 6-7% of initial pregnancies and coincides with the time when the embryo implants itself in the inner wall of the uterus, called the endometrium. Sometimes, the brown spot before your period is actually implantation bleeding. This is mild bleeding or spotting that occurs when a fertilized egg implants itself in your uterus. Keep in mind that only some pregnant people experience implantation bleeding.

Implantation bleeding usually occurs a week or two after ovulation and resembles brown spots. The bleeding tends to only last for a day or two. In some cases, it could be accompanied by implantation cramps.

Other symptoms of early pregnancy include:

Egg implantation may be accompanied by some symptoms. In some cases they are warned, while in others the pregnancy proceeds without any significant discomfort or signal.

Another element that can help us understand the difference between implantation and periodic losses is the color of the flecks of blood. Plant losses also have a different consistency. They can be more viscous like mucus or more liquid if the percentage of blood is higher

add a comment of Premenstrual spotting or pregnancy: how to recognize leaks