Premenstrual syndrome: what it is, how to treat it and how to prevent it 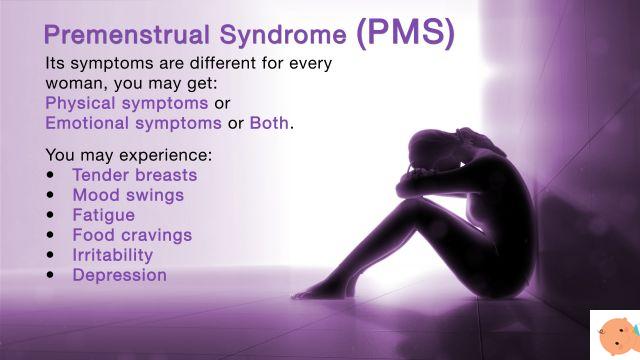 The jokes about premenstrual syndrome are wasted, right? When a woman is tense or angry she is often told "hey, do they have to come to you?". Unfortunately associate the bad mood al period is a hard habit to lose for many, but PMS is actually a serious problem for some women that can even result in disabling. If you suspect you are suffering from it or are already sure, here's how to treat it and, in some cases, prevent it.

What is PMS and when does it start

By premenstrual syndrome we mean one series of disturbances that affect the woman in the post ovulaturia phase of the cycle, also called the luteal phase, that is, when it occurred ovulation, the levels of progesterone they rise to thicken the endometrium and therefore allow any fertilized egg to implant itself in the walls of the uterus and grow there. It can begin immediately after ovulation or just two to three days before the arrival of menstruation, and in some cases it can be so annoying that it does not allow the normal performance of daily activities.

Read also: Menstrual cycle, get to know it

Among the symptoms more common than PMS are i mood changes sudden, with manifestations of irritability, aggression and even depression. Many women feel more tired, have repeated headaches, cry easily, and cannot concentrate. However, there are some of the milder and more recurrent symptoms

How to prevent PMS

To try to prevent premenstrual syndrome or to reduce the effects, good habits valid for all women can be put into practice. These include practicing physical activity (the release of endorphins has positive consequences on mood), sleep regularly at least eight hours a night, perhaps drinking a herbal tea based on chamomile or valerian a couple of hours before bedtime, limit the consumption of foods rich in salt and preserved foods, but rather prefer meals consisting of fresh products.

To avoid skin problems it is recommended to consume foods rich in vitamins B6 and B2, which are also useful against mood swings and depression. Among these there are wholemeal ones, bananas, some dried fruits such as hazelnuts and peanuts, flax seeds, rice… To avoid, however, caffeine and smoking.

Read also: The properties of Chamomile

Treatments and remedies for PMS

If, despite the precautions, PMS occurs on time a few days before your period, you can try some natural remedies useful to counter it. The advice for prevention is valid, with particular attention to nutrition and sports activities. If you are particularly tired, however, no to sports that are too intense: it is true that it helps to unload, but it could throw you down. Therefore, opt for activities such as swimming, walking, Pilates and yoga, which have benefits both on the body and on the mind.

For the premenstrual pain the best allies of women are magnesium and calcium: magnesium is found in green leafy vegetables such as artichokes and spinach, in almonds, in bananas, while for calcium you eat yogurt.

Among the other natural remedies you can find autogenic training, the consumption of herbal teas based on antispasmodic herbs (coriander, lavender, chamomile, valerian, elderberry and many others) and the use of herbal preparations.

In more extreme cases, using drugs. For pain it works over-the-counter pain relievers (ask your doctor or pharmacist for advice), but if PMS is really disabling the advice is to consult the gynecologist who, if he thinks it, could prescribe a cure (including a contraceptive that in some cases helps to limit the effects of PMS, or eliminates them altogether).

Those looking for a child, those who have irregular periods or those who are faced with a delay in menstruation often ask themselves if symptoms which has are attributable to a pregnancy or all 'arrival of the cycle.

In reality, the two things are equivalent because the mechanism set in motion by the organism is the same: the body produces progesterone to allow a possible fertilized egg to implant itself. It is therefore impossible to recognize the two different conditions, but if the presumed PMS lasts more than fourteen days, an average duration of one luteal phase, and menstruation does not come, you could be facing a pregnancy.

PMS is a condition that affects many women and represents a disorder sometimes disabling. She should not be underestimated or laughed at, but we must do everything possible to prevent her or, at most, keep her at bay in order to lead a normal life.

add a comment of Premenstrual syndrome: what it is, how to treat it and how to prevent it