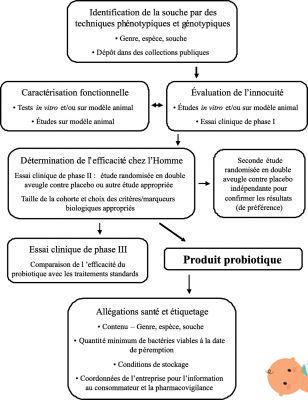 The probiotic name derives from the fusion between the Latin prefix "pro", meaning "in favor" and the Greek noun "bios", meaning life. Probiotic therefore means "in favor of life". And this is exactly the case because probiotics, helping to keep the microbiota in balance, have a positive function for the well-being of the whole organism.

Of course, we cannot consider probiotic supplements as miraculous, but we can certainly define them as very useful for preventing many diseases!

The health of children (and adults) starts with the microbiota

Probiotics, we said, are very important for the health of microbiota. But what exactly is the microbiota?

Not everyone knows this, but our body hosts a very large number of microorganisms, mostly bacteria (both "good" and "bad"), and all together form our microbiota. Or rather, ours, because in reality the scientific community divides the "general" microbiota of each of us into many "district" microbiota. In addition to the intestinal microbiota, therefore, the most famous of all, there are also the oral microbiota, the lung microbiota and so on. Everyone's microbiota has one custom composition, as if it were a bit like our fingerprint

If the gut microbiota is out of balance (dysbiosis) more or less serious pathologies can arise that affect the whole body, such as obesity, allergic states and inflammatory bowel diseases.

Some of the most common symptoms in case of alteration of the intestinal microbiota I'm:

It is therefore very important to take care of the microbiota and we will see how to do it shortly.

In addition to the gut microbiota, the oral microbiota must be kept in balance for guarantee the health of children. The oral microbiota, in fact, is the first point of contact with everything we ingest and breathe. Consequently it represents the first line of defense against viruses and pathogenic bacteria that try to attack the respiratory tract.

A balanced oral microbiota has been shown in several studies to consist predominantly of Streptococcus salivarius, a family of "good" bacteria.

If the oral microbiota is not in equilibrium, however, the bacteria present in the oral cavity are mostly bad and consequently the "line of defense" is weakened. If bad viruses and bacteria can move more freely, the risk of respiratory tract infections increases.

Furthermore, according to a study published in the Journal of Oral Science, pathogenic bacteria present in the oral cavity can also cause:

How then to keep both the intestinal and oral microbiota healthy?

Easy! First of all with some simple rules.

How to take care of the microbiota of children

Nutrition. A varied, balanced diet rich in vegetables such as fruit, vegetables, legumes and cereals (better whole) is perhaps the greatest gift we can give to our body. It is true that it can be difficult to get children to eat a lot of fruit and vegetables, but with a little imagination in the kitchen you can at least try. Fiber is very important to their health.

drugs. If used too frequently, and especially when they are not needed, they can alter the microbiota, especially in the case of antibiotics. NEVER give children an antibiotic unless specifically prescribed by the pediatrician and do not change the dosages.

probiotics. They are the best friends of the microbiota, both oral and intestinal. Probiotics help the microbiota to stay in balance and support the immune system. Indeed, according to a study by the Tor Vergata University of the city and the University of the city, taking probiotics is particularly useful for preventing and reducing infections of the mouth and respiratory tract.

You can find various types of probiotics on the market, but they must be chosen carefully depending on the situation.

Read also: 10 tips for a healthy and green diet for the whole family

According to the definition of the World Health Organization and FAO, a probiotic is "a microorganism administered alive, with the ability to improve human health through interactions with the host, if taken in adequate quantities." microorganisms that live with us and that interact with our organism, producing substances that are very important for our immune defenses. Probiotics arrive alive in the intestine and here they coexist with the bacteria already present, helping them to perform their functions better, such as inhibiting harmful bacteria and prevent their proliferation, produce good enzymes, stimulate the intestinal immune system.

When to use probiotics

As we have said, there are various types of probiotics, each one characterized by a specific family, species and strain. Probiotics can be useful in many situations: from diarrhea to constipation, from allergies to gastroenteritis and, why not, also to prevent respiratory tract infections.

Each specific probiotic strain may be more useful in one situation than another. Eg:

These were just a few simple examples, but it is best to always rely on your doctor who will choose the probiotics based on scientific evidence. In fact, today we have a good amount of data that allow pediatricians, and doctors in general, to suggest to their patients what is best to buy.

Probiotics they are generally very safe for most children, but there may be exceptions. Probiotics are not always suitable for babies born prematurely or with immune system dysfunctions. In any case, it is better to ask your pediatrician for advice first.

TAG:
Probiotics: when they are useful ❯

add a comment of Probiotics: because they are useful for the microbiota of children