Probiotics: because they are useful not only for the intestine 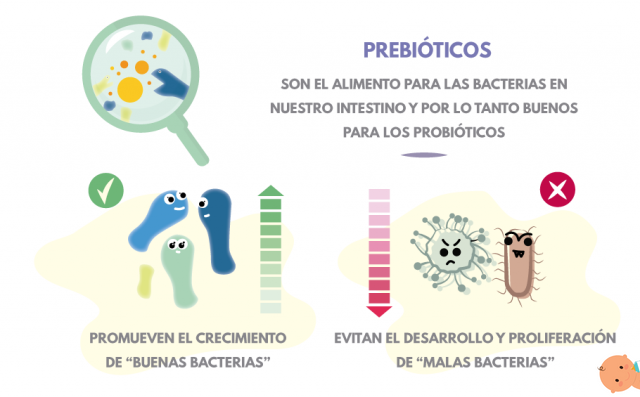 Too often we are reminded of Probiotics only when someone in the family is taking an antibiotic, or in case of gastroenteritis. We must know, however, that probiotics also serve a lot more and their role does not stop at that of "helpers" of our intestines. Probiotics relieve the symptoms of allergies, boost the immune system, and, especially now as we get back to kindergarten and school, they help prevent some respiratory infections.

The first definition of a probiotic was provided by the World Health Organization in 2001, according to which a probiotic is "a microorganism administered live, with the ability to improve human health through interactions with the host, if taken in adequate quantities. "Probiotics live in symbiosis with us and interact with our organism, producing essential substances for our immune defenses.

From their name, in reality, we understand how precious they are for the well-being of everyone, from infants to adults. The term probiotic, in fact, derives from the fusion between the Latin prefix "pro", that is "in favor" and the Greek noun "bios", that is life. Probiotic therefore means "in favor of life". Probiotics, taken through certain foods or through supplements, can therefore bring numerous benefits for the well-being of the whole organism.

According to the indications of the EFSA (European Food Safety Agency), probiotics to be defined as such and to be therefore marketed must:

Often these terms are used interchangeably, but these are different things.

PROBIOTICS: As we have seen probiotics are live microorganisms able to exert a beneficial function for the intestine and fall into the category of live lactic ferments. However, not all lactic ferments are probiotics.

PROBIOTICS: lactic ferments are not all the same and are distinguished on the basis of their ability to bring benefits or not to the bacterial flora. Non-probiotic lactic ferments, for example, have no effect on the intestinal microbiota and are often used by the food industry. The difference lies precisely in the fact that probiotics arrive alive in the intestine.

PREBIOTICS: as Prof. Cucchiara explains, "they are non-digestible organic substances (especially complex sugars) that are able to stimulate the growth and / the action of probiotics". That is why today the industry offers products, called symbiotic, in which both probiotics (bacteria) and prebiotics are present.

What are probiotics for

The primary goal of probiotics is to improve the balance and composition of the intestinal microbiota, that is, of all the microorganisms that live in our intestine.

Probiotics arrive alive in the intestine and here they coexist with the bacteria already present, helping them to perform their functions better, such as inhibiting harmful bacteria and preventing their proliferation, producing good enzymes, stimulating the intestinal immune system. Keeping the microbiota in balance means preventing many intestinal disorders such as bloating, digestive difficulties, constipation, acute diarrhea.

But what specifically do probiotics do?

Probiotic supplements can be really useful in many situations! Let's see some of them.

During and after a course of antibiotics

It is important to take probiotic supplements to prevent diarrhea - a frequent side effect of antibiotics - and also to replenish the intestinal flora more quickly. This advice applies to both children and adults!

The guidelines for the prevention of allergies in children of the World Allergy Organization (WAO) indicate that taking probiotics during pregnancy, during breastfeeding and in the first year of a child's life can reduce the risk of developing allergies, even if in a not very high percentage. Instead, taking probiotics has been shown to have beneficial effects on atopic dermatitis, as indicated in this study recently published in the Experimental and Therapeutic Medicine journal.

Colic in the newborn

Unfortunately, the data are still not entirely sufficient, but some studies, including a meta-analysis published in the journal Pediatrics, have observed a shorter duration of colic if probiotics (in particular lactobacillus reuteri) are administered. However, the recommendation is only valid for breastfed babies.

Even for children diagnosed with autism, probiotics can be a little help. According to some recent scientific studies, including one published in the scientific journal Frontiers in Psychiatry by a Del Paeseno research team, in children with autism not suffering from gastrointestinal symptoms, the administration of probiotics has a positive effect on symptoms related to socio-communicative impairment.

The intimate parts also have their own microbiota and it is important that it is in balance to avoid, or at least reduce, the incidence of infections. Today on the market we find probiotics capable of fight urogenital infections from the inside through the strengthening of the intestinal bacterial flora.

Again, the data are not entirely sufficient to demonstrate a clear beneficial effect, but according to a systematic review of the scientific literature, published in the Wiley Online Library, probiotics could be useful in improve symptoms and quality of life in patients with allergic rhinitis. Another recently published study also found improvement in symptoms and quality of life for patients who used probiotics.

If you have children who are often forced to stay home from kindergarten or school due to pharyngitis and tonsillitis, then probiotics can be of great help. According to a study by the Tor Vergata University of the city and the University of the city, the intake of probiotics would in fact be particularly useful for prevent and reduce the respiratory tract. This is because there is also a microbiota in the oral cavity and if it is not in balance it is easier for bad bacteria to attack the airways causing inflammation.

How to choose the right strain?

On the market today it is possible to find many products containing probiotic microorganisms, both in the form of food and supplements, and choosing the strain that best suits your needs may not be exactly simple. The different strains of good bacteria each exert a specific action, for example:

The best advice is always to get help from your doctor, pediatrician or pharmacist. Also because probiotics must be chosen on the basis of scientific evidence.

Yes to probiotics, but without forgetting about nutrition

Probiotics can help in many situations, especially if you have children who get sick very often. However, we must not forget that in order to keep our microbiota in balance, it is necessary to have children follow, from an early age, ahealthy nutrition, varied and balanced. It means that a good dose of fibers which, in addition to playing an important role as 'scavengers' of waste in the intestine, help our bacterial flora and protect us from numerous pathologies.

Read also: 10 tips for a healthy and green diet for the whole family TAG:
Probiotics: because they are useful for the microbiota of children ❯

add a comment of Probiotics: because they are useful not only for the intestine