Processionary: that's why you should stay away from it 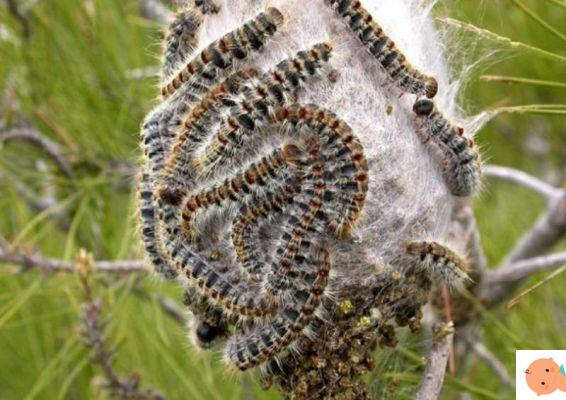 "It all worked out quietly." This is how Elio Novembre, head of allergology at the Meyer University Hospital of the city, comments on the case of the children who last week arrived in the emergency room because they came into contact with the processionary while they were playing in a public garden.

What we call processionary is a defoliator moth, an insect that lives off various pine species (Traumatocampa pityocampa), but can also be harmful to other conifers, such as cedar. In adulthood it is a gray-colored butterfly, with a stocky and hairy body, but it is in the larva stage that it can cause discomfort to people and animals.

Processionary: photo to recognize it

Here is a series of photos to recognize the processionary

Why it is better to stay away from it

«The body of the larvae is covered with stinging hairs which can cause allergic reactions, hives, contact dermatitis and only very, very rarely more serious reactions, such as asthma and anaphylactic reactions ».


In case of contact, explains Novembre, «it is advisable to rinse the skin thoroughly. If the reaction is mild, applying an emollient treatment may be sufficient. Otherwise, in case of severe skin reaction or asthma, it is better to consult a doctor ».

"From the cutaneous point of view, if the reaction is minimal, and therefore only a little redness appears on the skin - adds Maya EL Hachem, director of dermatology at the Bambino Gesù Pediatric Hospital in the city - just apply an emollient cream with an anti-inflammatory effect and cut the nails to prevent the boy or girl from getting injured and infected by scratching. In the event of a more prominent or worsening reaction, the pediatrician or dermatologist instead prescribes a therapy based on local cortisone (to reduce inflammation) and antihistamines by mouth. In rare cases and in the presence of respiratory reactions, cortisone by mouth and therapy with bronchodilators may also be necessary ". However, antihistamines in cream are not applied because with sun exposure they can cause allergic reactions.

Experts remember, however, that the processionary moth is not dangerous, and only in particularly sensitive children, because they are asthmatic or prone to skin allergies, can it cause more annoying symptoms. "Symptoms that, in any case, if treated, disappear in a few days" reassures the dermatologist. She, however, she warns her: "the reactions get worse with each new contact." So those who have already had the unpleasant experience of a close encounter with the processionary, tend to pay even more for the effects later.

«Usually - he continues - contact with the hairs of the processionary moth triggers a local inflammatory process, that is, the appearance of papules of a few millimeters. In those who are allergic and therefore have more susceptible and reactive skin, however, it can also generate the appearance of nodules, with serum bubbles which, breaking, can undergo infection, or cause edema with swelling of the irritated part. But the recommended therapy, if timely, prevents complications and accelerates healing ». In case of blister infection, it is better to also resort to a local or oral antibiotic, depending on the extent and extent of the infection.

How to detect the presence of processionaries?

Beginning in autumn, the processionary larvae begin to build nests where they will then spend the winter. «" Nests "that are clearly visible on the branches» explains Fabio Cianferoni, entomologist and collaborator of the Specola of the Natural History Museum of the University of the city. "They are whitish and silky clusters, with a fluffy appearance."

Then, between the end of February and the beginning of April, depending on the climatic conditions, the mature larvae, up to 4 centimeters long, abandon the cocoons and in single file - for this the name processionaries - descend from the branches of the pines and slip into the ground where they cross and from where they will flicker between the end of June and the beginning of September.

«This is why contact with the caterpillars is frequent in early spring, and during their processions it is therefore possible to come into contact with or inhale their stinging hairs» specifies Cianferoni. In case of allergic reactions, move the child away from the area.

To avoid the problem upstream, "one could avoid planting these trees, vulnerable to processionary infestations, in residential areas", comments the entomologist, who in any case recalls that the fight against the pine processionary is mandatory, in areas considered at risk and where the presence of the insect seriously threatens the survival of trees, pursuant to the Ministerial Decree of 30 October 2007 (published in the Official Gazette No. 40 of 16 February 2008).

The Phytosanitary Service and / or the territorially competent mayor has the task of imparting the methods of intervention for the containment of the insect. "There are different methods of disinfestation: from the removal of nests, obviously done by specialized people, to the use of bioinsecticides or traps with pheromones to capture adults" concludes Cianferoni.

TAG:
Prodrome pregnancy, what they are, how to recognize them and how long they last ❯

add a comment of Processionary: that's why you should stay away from it