Progesterone in pregnancy: what is it for 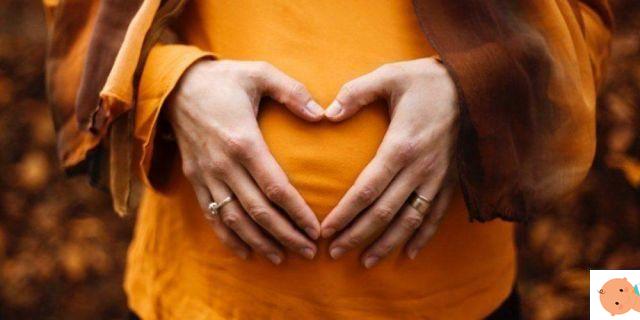 Surely you have at least heard of it. It is progesterone, one of the most important hormones for a woman's reproductive life. From conception to pregnancy, its levels are important for health. If it's too low, for example, getting pregnant can be tricky. Her role then becomes fundamental when expecting a baby, especially for her growth. Here's what you need to know about progesterone in pregnancy.

It is a steroid hormone belonging to the progestin group. Man produces a very small amount of it and is therefore considered a typically female hormone. Progesterone is secreted by:

Progesterone and the menstrual cycle

The amount of progesterone during a woman's menstrual cycle varies. Its level is quite low (almost absent) during the follicular phase. Instead, it increases in the ovulation phase. What happens next (luteal phase, the one that goes from ovulation to menstruation) depends on whether or not fertilization has taken place.

Thanks to another hormone (the luteinizing one, LH), the follicle is transformed into the so-called corpus luteum which, as we have seen in the previous paragraph, has the task of starting to produce progesterone to prepare the ideal environment for pregnancy. If fertilization fails, the progesterone level drops and the corpus luteum regresses. At that point, the endometrium flakes off and menstruation arrives.


If, on the other hand, the egg is fertilized, the level of progesterone rises to favor a good engraftment of the uterine walls. When the placenta develops, it will produce the hormone that will ensure its proper functioning. The progesterone remains high throughout the pregnancy. If it is lowered, some problems may arise which we will see later.

What is progesterone used for in pregnancy

Progesterone has the fundamental task of supporting the good progress of pregnancy. It prepares the uterus for implantation, making the endometrium more welcoming and the uterine cavity warmer. Yes, because when progesterone increases, the basal temperature also rises a little, which precisely makes the environment comfortable for the fertilized egg.

In pregnancy, progesterone also has the fundamental task of inhibiting the contractions of the uterus that would cause the early or premature expulsion of the embryo or fetus. It actually acts on all smooth muscles, including the intestinal one. Progesterone reduces peristalsis, bowel movements. This is why constipation is so common when expecting a baby.

During pregnancy, progesterone feeds the blood vessels of the endometrium which, in turn, will support the growth of the fetus. When fully developed, this role will be played by the placenta. Progesterone also stimulates the breasts to produce milk, so it is also useful after giving birth.

Decrease in progesterone in pregnancy

Low progesterone levels before conception can make it difficult. The low quantity could be the signal of an anovulatory cycle, that is in which ovulation does not occur, which happens more frequently after a certain age, when the ovarian reserve begins to be scarce and fertility decreases. Polycystic ovary syndrome may also be characterized by low progesterone.

A different problem occurs when the pregnancy starts, but then the progesterone level drops. As we have said, a lot of it is needed during gestation and a reduction can cause various problems. The most common are those of a miscarriage, especially in the first trimester of pregnancy, or of a preterm birth, from the 25th week of pregnancy.

When to take progesterone in pregnancy

In the event that there is a threat of a miscarriage (for example with the presence of blood loss, abdominal cramps, ultrasound signs of placental abruption) or premature birth, the gynecologist may prescribe progesterone. Rest, absolute or partial, is also often associated. The doctor does not necessarily do this, it is a personal choice based on various parameters, but it is still a fairly common decision.

If there is a threat of miscarriage in the first few weeks of pregnancy, the hormone will favor implantation of the embryo in the uterus and must be taken until the placenta is able to perform this task on its own. If, on the other hand, the danger is that of giving birth too early, the function of progesterone will be to reduce the hyper-contractility of the uterus, that is, to block contractions.

How progesterone is taken

Progesterone can be taken in the form of:

When to monitor progesterone in pregnancy

The analysis of the amount of progesterone in the blood is not one of the tests that are normally prescribed during pregnancy. If everything goes normally there is in fact no need to monitor it. The speech changes if there is some problem, for example a threat of abortion in the first period or the risk of preterm birth. In that case, the gynecologist may decide to check the level of the hormone in the blood.

This evaluation is more frequent in the preconception phase. When multiple terminations of pregnancy occur or if you are having a hard time getting pregnant, there may be a problem with low levels of progesterone in your circulation. Its level also gives important information on the occurrence of ovulation.

Remember that progesterone values ​​change according to the menstrual phase. So the exams will be done at a specific time of the cycle and not just any day. It is important to remember that any hormonal contraceptives (such as the pill) must be stopped before taking the test because otherwise it could be falsified.

Levels of progesterone in pregnancy

Let's see what progesterone values ​​should be during pregnancy. Keep in mind that each testing laboratory has its own ranges of values. Here we refer to the site analisidelsangue.net.

Levels of progesterone during the menstrual cycle

Calculating a regular 28-day cycle, the calculation should look like this:

add a comment of Progesterone in pregnancy: what is it for