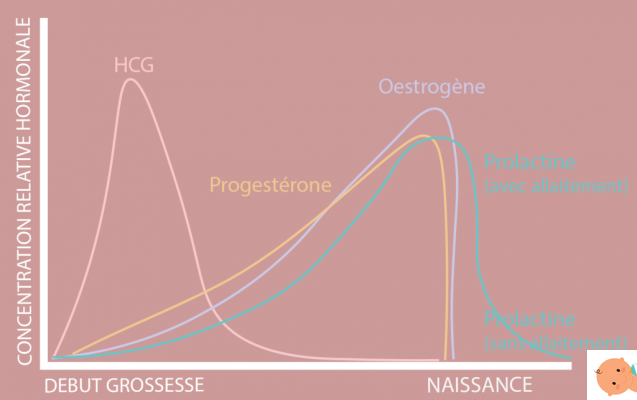 Il progesterone it's a female sex hormone which falls into the group of steroids. It is secreted by the ovaries after ovulation and performs numerous functions. Together with estrogen, it is one of the most important hormones among those that regulate the menstrual cycle and the reproductive life of a woman.

This hormone has a chemical structure very similar to the luteinizing hormone. The luteinizing and follicle-stimulating hormones produced by the pituitary gland promoteovulation e they stimulate the ovaries to produce estrogen and progesterone, which stimulate the uterus and breasts to prepare for a possible fertilization.

Il progesterone belongs to a group of steroid hormones called progestins. It is mainly secreted by the corpus luteum in the ovary during the second half of the menstrual cycle. It plays important roles in the menstrual cycle and in maintaining the early stages of pregnancy.

During the menstrual cycle, when an egg is released from the ovary during ovulation (around the 14th day), the remnants of the ovarian follicle that enclosed the developing egg form a structure called dirty body. This releases progesterone and, to a lesser extent, estradiol. Progesterone prepares the body for pregnancy in case the released egg is fertilized. If the egg is not fertilized, the corpus luteum breaks down, progesterone production decreases and a new menstrual cycle begins.

If the egg is fertilized, progesterone stimulates the growth of the blood vessels that supply the lining of the uterus (endometrium) and stimulates the glands of the endometrium to secrete nutrients that nourish the early embryo. The progesterone then prepares the lining of the uterus tissue to allow for implantation of the fertilized egg and helps maintain the endometrium during pregnancy. During the early stages of pregnancy, progesterone is still produced by the corpus luteum and it is essential to support pregnancy and form the placenta.

During pregnancy, progesterone plays an important role in the development of the fetus;

The level of progesterone in the body constantly increases during pregnancy until labor occurs and the baby is born.

Although the corpus luteum in the ovaries is the main site of progesterone production in humans, progesterone is also produced in smaller quantities by the ovaries themselves, the adrenal glands and, during pregnancy, the placenta.

How progesterone is controlled

However, if the ovulated egg is fertilized and gives rise to an embryo, the cells surrounding this first embryo (which are destined to form the placenta) will secrete. human chorionic gonadotropin. This hormone has a chemical structure very similar to the luteinizing hormone. This means that it can bind to and activate the same luteinizing hormone receptors, which means the corpus luteum does not break down and instead continues to produce progesterone until the placenta has stabilized.

What if i have too much progesterone?

Progesterone, alone or in combination with estrogen, is taken by women as an oral contraceptive ("the pill"). There pill it works by preventing ovulation, making it almost 100% effective in preventing pregnancy.

Progesterone is used in the hormone replacement therapy to relieve the symptoms of menopause in women.

Read also: Natural fertilization, the development of the embryo

What if i have too little progesterone?

If the progesterone is absent or the levels are too low, it can occur irregular and profuse menstrual bleeding. A drop in progesterone during pregnancy can result in miscarriage and early labor. Mothers who risk giving birth too soon may be given a synthetic form of progesterone to delay the onset of labor.

La lack of progesterone in the blood can mean that the ovary failed to release an egg during ovulation, as can happen in women withpolycystic ovary.

Progesterone: the role in pregnancy

Between the sixth and ninth week of pregnancy, progesterone production passes completely from the ovaries to the placenta. At this point the progesterone has the task of:

Other sources for this article:

You and your Hormons: Progesterone

What function does progesterone play in pregnancy?

The role of progesterone in pregnancy is to prepare the uterus to accommodate the embryo and to protect it during the entire gestation.

What happens if progesterone levels are low?

If progesterone is produced in insufficient quantities compared to normal, the endometrium may not be suitable for implantation of the fertilized egg or ovulation may not occur (anovulatory cycle).

TAG:
Progesterone and miscarriage risk: everything you need to know ❯

add a comment of Progesterone: what it is and what it is used for in pregnancy