Quarrels between children, 9 tips for parents 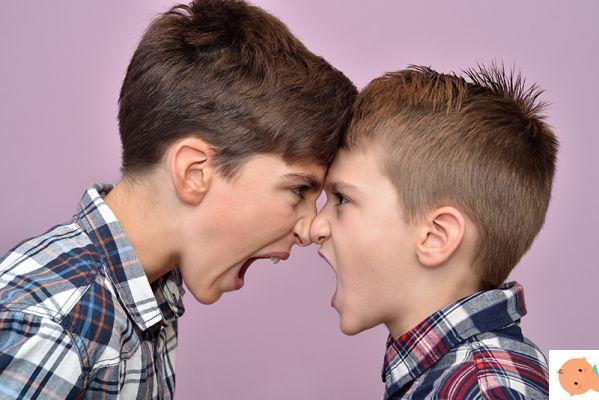 Quarrels can occur between preschool and primary school children with a whirlwind of variations on the theme. A moment before peace reigns and then, within a matter of minutes, it almost seems like the two little friends can't stand each other anymore. Here are some recommendations for parents in this regard.

A small group of children aged 4-5 play in the park, accumulating sticks to set up a 'camping with fire' area. Suddenly, the cheerful voices turn into screams of disappointment: a comrade tore a branch from the hands of another, so the activity stopped abruptly and a fight broke out.

What to do? Here are some tips for parents.

1) Do not intervene immediately, trust

In the face of small children's quarrels, it is better for parents not to intervene "because the child is competent and knows how to find his own solutions on his own, in a creative way, if the adult does not intervene", says Scalari, psychologist, psychotherapist, psychosocioanalyst, specialized in parent-child relationships and author of books and essays on these topics, including Being brothers. Clashes and encounters. What place do parents occupy ?, Armando Editore.

"In the preschool age group, it is normal and physiological for children to quarrel with each other, because they still have to measure between the pleasure of playing together and their self-centeredness.

Often, however, the parent who intervenes transforms a normal quarrel between companions into a case of 'treason' to the child. In this way, the child will think he has the right for the world to bow down at his feet, "says the psychotherapist.

2) If you are concerned that they could be hurt, approach them in silence

In a case like the one in the park, if the mother sees that the fight is escalating, and fears that someone might get hurt, "then it is good that you physically approach the scene of the fight," says Scalari.

"If the parent, for example, is sitting on a bench, he has to get up, go to the children and look at them, to make it clear that he was keeping an eye on them, but in silence, without speaking into words.

It must not, in fact, take away from children the possibility of finding a solution. The adult's gaze is restraining, and can also be severe to scold if necessary about what is happening, "says the psychotherapist.

Read also: Quarrels between siblings: how to manage them

3) Do the children go to the hands? Separate them and blame no one

When the tone of the quarrel risks becoming a little too impetuous, the adult should approach, always in silence and separate the children involved.

"In all of this, it is very important that the adult does not blame anyone. Instead, he should say to the children a phrase like: 'Now, play for a while alone, take a break and then let's see!', Suggests the child. Psychologist.

According to the psychotherapist, it is better to avoid the classic cliché phrases: 'You mustn't hit your friend!'; 'Come on, stop it, what did you do?'; 'Do not argue!'

Because? When you try to repress an attitude that is not first educated, as soon as the mother turns around, the child gets into a fight. As long as the adult is out of sight, the child kicks or bites his partner ...

"The parent must give space to the child's reflection, encourage him to think".

The repression of an aggressive gesture, which is natural in this phase, has the opposite effect, that of making it explode ", explains the psychologist.

5) The parent's job is to settle the dispute, not to punish

Basically, for Scalari, when the quarrel between children takes on stronger tones, the parent should divide them and act in such a way as to regulate the episode without punishing them. On the other hand, it is important to invite children, for example, to go to far corners of the play area to reflect.

"Thus, 4-5 year olds are offered the opportunity to understand how to play together avoiding conflict and, at the same time, helping them to find a third way.

For every child, play is like food and air, it is fundamental for his psychophysical well-being and this means that, in the end, he himself will accept to give up a part of his self-centeredness. Because it is more important to play and have the first friend of the heart, all this is a great training ground for relationships ".

Read also: Quarrels and conflicts in the family: live with Daniele Novara

Often, faced with these quarrels between preschool children, the adult reacts, at first, by saying: "Come on, don't do that, you have to be friends with everyone!".

A statement that makes no sense, according to the psychologist, because already at this age it is normal for every child to have his preferences and change them quite quickly ("today the best friend is Marco, tomorrow, instead he only plays with Thomas).

Healthy aggression is a stage of growth and narcissism which, at times, leads to conflict situations is 'normal', a structural part of the child in this age group.

"The adult, on the other hand, often reads these moments of confrontation between peers, coloring that quarrel with his emotional palette.

This is a misunderstanding because we must not confuse a childhood situation with the secret desire to 'cancel' the office colleague ", says the psychotherapist.

In other words, the parent does not have to evaluate fights between children by transferring the negative feelings he has as an adult when he is arguing with someone.

Here are some tips regarding quarrels between primary school children.

During primary school, disputes and teasing of various kinds often become much more frequent between peers of different sexes. An example?

In the corridors of the school, a boy around the age of 8 has a fight with a classmate and they get 'slapped'. Another companion reports it to the teacher who scolds both of them. The girl's mother sees her daughter leave school in tears and decides to call the boy's mother. She who in turn asks her son for explanations. The two children give different versions of who started it. The episode turns into a serial series of sorts: the girl's mother doesn't believe the child's version and she scolds him again when she is alone, after school.

"A case of this type, quite common in this age group, frequently represents a mismanaged courtship scene. The message, somehow, is 'look at me', 'I wish you would notice me' ...

The classic beach fight between preteens is actually hand-to-hand. Now, all this is anticipated and already at 8-9 years, the discovery of the body of the other takes place ", says the psychologist. Also in this situation, the adult should not intervene to leave the children the possibility to manage the feelings and learn to get by on your own.

8) However, if the quarrel is between bully and victim, it is better to talk to the teacher

Of course, the 'love scuffle' is not the only case that occurs during primary school. At times, the physiological quarrel of the preschool age here takes on the contours of a clash between bully and 'victim'.

"Around 8-9 years, even if in proportion to age, some kids can become 'bad' and bully their classmates. In this case, it is advisable for the mother of the child who suffers acts of aggression to contact the teacher and not the other parent ", says Scalari.

It is necessary to understand why Giovanni is so angry with the world and to create a strategy to help him, even with the intervention of more competent adults if necessary.

On the other hand, it is useless to think that the mother who has not been able to work on the most violent part of her son, finds a solution ", says the expert.

At the same time, it is important to lend a hand to the child who has suffered an aggressive act to offer him the tools to defend himself.

9) Beware of labeling teasing as violence or bullying

Episodes of great aggression require intervention, they refer to situations that cannot be left unresolved. However, for the psychologist, it is important not to label any more or less annoying manifestation under the label of violence or bullying.

Teasing, pulling the ties of the backpack, or the hair is nothing serious. "These things have always happened and there is no need for the parent to rush to the rescue of the child immediately. The boy in this age group must develop his skills and learning to fend for himself. Of course, if the situation is really serious, adults have to pull together, otherwise not, "says the psychologist.

From the expert's point of view, the primary school kid should avoid calling his mom every time he makes a 'mess'. And in the case of a normal quarrel with a partner, he should handle the problem himself. "In the end, faced with this type of quarrel in the norm, the parent should play down", concludes Scalari.

What to do if two small children quarrel?

It is better that the parents do not intervene because the child is competent and knows how to find his solutions on his own, in a creative way.

Two children argue and it is feared that they may get hurt. What to do?

It is good for the parent to physically approach the scene of the fight.

TAG:
Quarrels between siblings: how to manage them ❯

add a comment of Quarrels between children, 9 tips for parents