Quarrels between siblings, forbidden to intervene 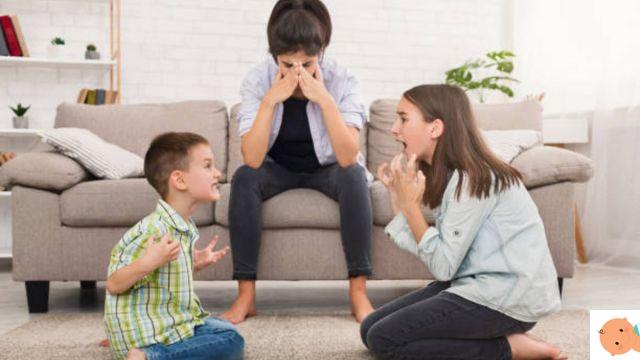 It really happens in all families with small children: a trifle is enough to trigger a quarrel between siblings. And the 'poor' parents find themselves protagonists of an arbitrage they would gladly do without. Well, the best behavior is just not to get involved in the little skirmishes of the children and let them deal with each other. Word of the pedagogist Daniele Novara.

Quarrels between brothers, why they happen

"It is inherent in nature that two little brothers quarrel" begins Daniele Novara, pedagogist and director of the Psychopedagogical Center for Peace and Conflict Management in Piacenza and author of various books on children's education, including "Litigating to grow up - proposals for early childhood" (Edizioni Erickson, Trento 2022 ): "it is the consequence of the physiological jealousy of the older siblings towards the younger ones, who are the new arrivals and, in the eyes of the first-born, want to 'usurp' the affection of mum and dad. Especially if, as happens more and more often , they are the only two children, who therefore compete for the 'primacy'.

Through quarreling, children try to show off with their parents in order to get their involvement, especially when they see them distracted from their occupations : it is no coincidence that children fight more when their parents are intent on doing something else - watching TV, reading a book or working on the PC - and especially in the presence of the mother, who is the one who immediately rushes to the first scream (unlike the father, who usually does not mobilize too much and therefore does not 'give pleasure' to arguing); another typical moment is the return from work, in which the child demands attention after many hours spent away from the parent.

They are exhibitionistic attitudes, the purpose of which is not the quarrel itself but precisely that of attracting attention and, perhaps, obtaining the consent of the mother ".

Quarrels between brothers, what to do

Starting from these assumptions, the best behavior on the part of parents can be summarized in four points:

Video: Quarrels between brothers, what to do? Daniele Novara answers

Is it normal for two siblings to fight all the time?

Yes. It is the consequence of the physiological jealousy of the older brothers towards the younger ones, who are the newcomers, and want to 'usurp' the affection of mum and dad.

If young children argue, is it necessary to intervene?

The temptation to intervene is strong. Instead, it is good to keep aside and above all to avoid looking for the 'culprit', because it is an attitude that increases the negative emotional index of the children, makes them feel inadequate.

TAG:
Iodine in pregnancy is essential for the maturation of the brain ❯

add a comment of Quarrels between siblings, forbidden to intervene