Quarrels between siblings: how to manage them 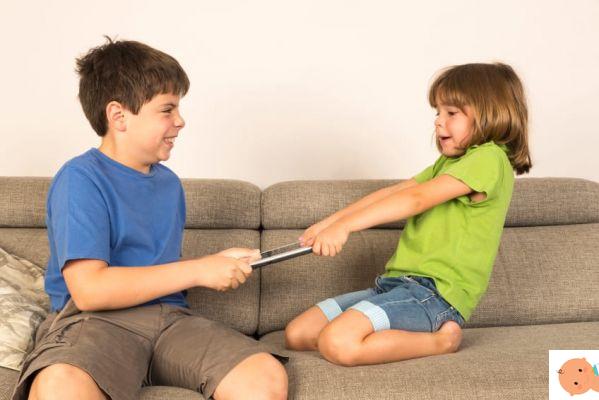 Between brothers they can break out furious quarrels, and it is normal for this to happen. We must keep in mind, however, that a conflict between children is not a fight between adults and there is no need to worry.

In fact, children only get angry with friends and siblings, that is, with those they love the most after their parents. These micro-conflicts usually always have the same motivation: a common interest. We contend for a toy or for a seat on the sofa next to their mother: children tend to immediately externalize any conflict, without filters.

After years of study and research Daniele Novara, pedagogue and author of "Arguing is good " and founder of the Psycho-pedagogical Center for Conflict Management in Piacenza, he has developed a real method: that of a good fight.
What should the parent do, intervene or not?

To resolve the disagreements that arise, it is important for the adult to help promote and help communication and discussion between the siblings. He must be a mediator, but not a "judge". The adult must help the children to find an agreement by offering a gift with her presence conflict resolution model.
This means, for example, that discussions should be managed in such a way as to show children constructive ways to confront and clash, respecting each other and themselves.

We asked Daniele Novara a few questions about quarrels between brothers.

How to manage conflicts between brothers and sisters related to jealousy?

"The brothers argue out of mutual interest, that is, because they are involved in an interest in the same toys, or they argue because they are competing for the attention of the mother". As it should be, every child wants everything for himself, but to speak of "jealousy" is excessive.
“Children do not quarrel with strangers, they quarrel with closest friends, or with siblings, that is, with the people they are closest to. The parent has to handle all of this. How ? “He has to help the children exchange their side of the story. Arguing is part of the game. "

When and how is it right to intervene in a quarrel between brothers / sisters?

As Daniele Novara writes in his book, the "good quarrel method"It serves to help the brothers and sisters to manage problems so that they become an opportunity for growth."


But is that right or not intervene in conflicts between siblings?

"Parents must not seek the culprit and in any case must not seek the solution: any adult solution is different from infantile thinking." Daniele Novara explains: “Here's what to do: help children a exchange their own version of events, their reasons without going into the merits, without saying what is right and what is wrong: they think about it. The important thing is that the brothers talk to each other, that they communicate ". There communication is the key to everything.
"In the end it is they themselves who seek an agreement: sometimes there is and sometimes there is not, but the important thing is that they learn to fight well as children."

How to manage the conflicts between brothers and sisters related to the strong age difference?

"It depends on age, if one child is an adolescent and the other and in his childhood there is a substantial difference in the stages of life: a teenager tends to be over the top and not care about the little brother, so the parent has to be content that they can handle the conflict on their own. The right age at which this method can be applied for optimal management of quarrels is between 3 and 10 years. "

Discussions, therefore, should be managed in such a way as to transmit constructive ways to confront each other, with respect for others and for themselves.

What to do in case of ongoing conflicts between brother and sister?

"In the event of continuing conflicts, the aforementioned method must be applied and in any case it is necessary to avoid the quarrel becoming a problem of the parents, because if the children attribute to the parent a role of" judge ", an intemperance towards the parents could occur , one continues intervention request. We need to create the right distance and make sure that children are able to manage their own conflicts among themselves ".

The 5 big problems facing parents today, according to an English super nanny

add a comment of Quarrels between siblings: how to manage them