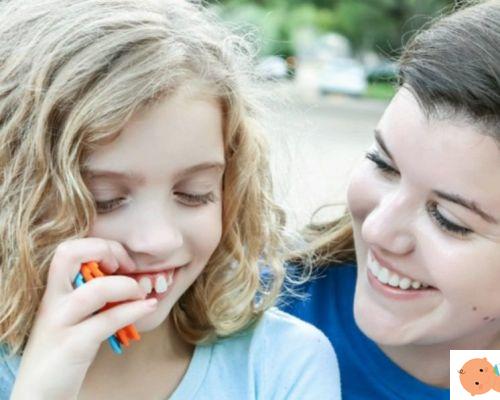 There is Alessia, who remembers how much she is felt guilty when she realized she was spared from genetic disease who instead hit her brother, and there is Maria, who tells of when she understood that she was in danger of give up his lifeaccustomed as she was to putting the needs of her sister suffering from Friedreich's ataxia, a neurodegenerative disease of genetic origin, first of all. There is Francesco, Pasquale's younger brother, who has a rare disease characterized by motor disorders and cognitive impairment, who wonders if his parents would really have thought about having another child if they had known before the firstborn's disease, and there is it is Silvia, who remembers her fierce jealousy from her childhood with a little brother with a serious genetic disease: "I spent my whole youth thinking I was terribly bad".

These are some of the testimonies of brothers or sisters of people with rare diseases collected in the context of Rare Sibling project launched a few months ago by the Rare Diseases Observatory (OMaR) and also published in the volume My story is that of my brother, dedicated to notes on "sibling": an English word that means brother or sister, but which in the medical field is often used to refer specifically to brothers and sisters of people with illnesses or disabilities.

When a child arrives with a rare disease

Inevitably, these brothers and sisters experience very particular situations, characterized by the sudden break into the family balance not only of a new child, but of a "rare sick" child, that is, with an illness that is often important and often difficult to diagnose. As the psychologist Laura Gentile in a chapter of the volume published by OMaR, whether the disease manifests itself at birth or later is in most cases a "unpredictable, unchosen, highly stressful event: a real trauma ". And if its appearance occurs when the child is already a few months or a few years old, there is the complete rupture of a previous equilibrium," a normality of life that is suddenly swept away ", the need to relate to the diversity of the rare disease.

Yes, because compared to other diseases or disabilities that can already be difficult to process for a brother or sister, the element of rarity that characterizes these conditions also brings with it other complications: for example, difficulty of diagnosis, which is often done very late with all the burden of anxiety, uncertainty and loneliness that this entails for the family, or difficulty explaining to others what it is exactly (it does not help that often these are diseases with a name that is difficult to pronounce).

Read also: Down syndrome: 21 things to know about this condition

How the brothers and sisters of children with rare diseases react

Anyone who has multiple children knows how different siblings' reactions to the arrival of a new baby can be and how many nuances there can be in the relationship they will build together, day after day. All the more reason this happens when a brother or sister is struck by a rare disease: as Gentile explains, they will be possible infinite reactions that will depend on various factors such as age, being older or younger siblings, the type of rare disease and the degree of disability of the affected sibling, his temperament, the reactions of the parents themselves and more.

That said, the psychologist points out that there are still some recurring reactions: some develop a very strong sense of responsibility, taking charge of the emotional state of the brother and of the parents and becoming very good and efficient in everything they do, even for a "restorative need" towards their parents, who feel they must at the same time comfort and repay for the fact of be "healthy". In reverse, others try to make themselves invisible, they do not want to excel in order not to surpass their brother. And again, some learn to take care of themselves, not to bother with needs and requests, not to disturb in order not to overload a family system that they perceive in difficulty (often also economic). "I would not disturb is still my motto and Chi fa da si fa per tre is my lifestyle", says Silvia, who we mentioned at the beginning. Others, on the contrary, react in oppositional or provocative way to arouse attention. And it can also happen, explains Gentile, that the same person carries out different behaviors in different contexts (family, school, friendships) ".

Many develop guilt feelings to be healthy and to be able to do things that brother or sister cannot do. Nicoletta, Marco's sister, who suffers from spastic tetraparesis following a neonatal asphyxia, remembers: "We brothers felt aswing of emotions. Sometimes, we had moments of anger because we missed our parents, who seemed absent: for them there was only Marco with his problems. But anger alternated with a sense of guilt because we could go outside and he always stayed there in the house, never becoming independent. In the meantime we were growing up too fast, we had to take care of many things ".

Others try one great fear about his brother's state of health, and worries that he might die. Lara, Fabio's sister, struck by polio: "At times, his being sick frightened me: especially the epileptic seizures he had as a boy. As a child I was scared, it was the only thing about Fabio that made me uncomfortable, because I couldn't understand. Nobody explained to me what was happening, until, little by little, I introjected it and I stopped being afraid ". This perennial state of fear can result in an over-investment in the relationship with the sick brother or sister or, on the contrary, in a total disinvestment.

Finally, siblings often decide to devote themselves to professions directly linked to the therapeutic needs of the brothers or in any case, more generally, relative to care and assistance services, for example the teacher. Nicoletta also remembers: "If I later became a primary school teacher I owe it to Marco too. I suffered a lot for the difficulties and closures he encountered and I promised myself that I would be everyone's teacher. I wanted the climate in my class to always be positive for everyone and so it was, so today I am entrusted with the most problematic children. Being Marco's sister gave me great sensitivity ".

This too is actually quite common. "In most cases - underlines Gentile - in their experience the siblings become brothers of people with disabilities strong, determined people, capable of problem solving strategies, creative, capable of dealing with emergencies more effectively and efficiently tolerant of diversity, more collaborative and empathetic". But be careful: these positive elements do not necessarily come completely spontaneously: as the psychologist points out, they must be built and conquered sometimes by passing a emotional and relational path not at all simple.

Read also: The education of children with emotional intelligence

How to help the brothers and sisters of children with rare diseases: advice for parents

How can parents accompany the siblings in their process of elaborating the situation and becoming aware of their resources? Here are some tips that emerge from the book My story is that of my brother:

1 Listen to them carefully

2 Pay attention to any changes in behavior

Sleep or appetite disturbances, mood swings, school difficulties, regressive behaviors (such as wetting the bed or sucking your finger at an age when you no longer do it), psychosomatic manifestations such as headache or stomach ache without specific causes they can all be symptoms of stress;

3 Talk to them about their thoughts and emotions

Often it is easier for parents to talk about positive feelings, which are easily accepted and reinforced, while it is more difficult (sometimes even forbidden) to talk about negative ones. But denying them does not mean that they are not there: it is completely normal that even siblings (as indeed the parents themselves) can experience feelings such as anger, sadness, shame, frustration, aggression. It is very useful for children and adolescents to be able to confront these emotions in an open and spontaneous way, knowing that they will be accepted and not judged by the rest of the family, just like positive emotions.

4 Accept the ambivalence of children's emotions

Unlike parents, who generally come across illness and disability as adults, the brothers and sisters of sick children "breathe" these conditions from an early age if not from birth, so they learn to relate to sick siblings since immediately, "triggering the characteristic reactions between brothers, made of jealousies, envy and rivalry, But also reciprocity and sharing and expressing the ambivalence of emotions typical between siblings, but in this case intensified by the experience of illness ". This helps them to placing the difficult situation within a natural relationship, which however needs specific help.

It is a very delicate moment because, as Gentile writes, "the comparison with other children, their observations, their gazes generate doubts and less explicit questions about the situation ". For this reason," having already had the opportunity to talk with the family about critical situations, the management of uncomfortable questions from others, invasive glances, allows sibling to be better equipped ".

add a comment of Rare diseases: stories of brothers and sisters