Reading and writing before primary school: yes or no? 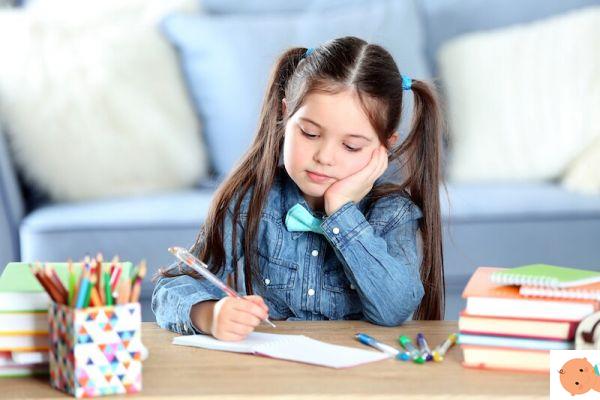 The child grows up, cuts new goals and mum and dad find themselves facing each stage with joy, amazement and some doubts.

Among the (infinite!) Questions with which parents struggle for the good of the child, in view of the transition to primary school, thoughts on how to favor and help him multiply.

With a couple of years in advance, often, an increasingly frequent question arises: it is advisable for the child to learn to read and write before his or her school debut, also thanks to pre-printing cards?

This is the key concept that emerges from the experiences on the field and from the knowledge of those who work with children every day. There is no single and absolute answer to this question. Instead, many different aspects need to be carefully considered. Because? To explain it are the 4 experts we involved to reflect together on the issue in all its facets.


READ ALSO THE SELF-ESTEEM OF CHILDREN, THE GOLDEN RULES FOR GROWING IT

Does the child show interest in 'letters'? Don't block it ...

Already around the age of 4-5, some children seem very attracted to the 'letters' of the alphabet, they look at them with interest (in books, on the street, on signs, everywhere) and try to write something.


In this case, then, how should the parent behave?

“As a primary school teacher and mother, I feel I can answer this question with another question: is it right to block a child's curiosity? My answer, of course, is 'no' as long as it is not a question of a forced and imposed approach to reading”, Says Beatrice Braga, an expert, among other things, in re-education to writing (and author of the book: I learn spelling and punctuation, Erickson).

Michela Artusi, a primary school teacher with over 30 experience (of which 15 in kindergarten) is also on the same wavelength: "If a child, for example, tries to write his name or that of a character of the cartoons he knows by heart, it is certainly not a problem. In all ages, there have always been those who want to read and write, it's a spontaneous thing, and it's okay to take it as it is, without creating frustration for the child ".

The (great) power of imitation ... even in writing

The interest in the 'letters' that a 4-5 year old child can show is part of his broader path of exploration and discovery of the world around him. Not by chance, in the first 7 years of life, the child learns mainly by 'imitation and example'. It is supported by Rossana Colli, pedagogue and author of numerous books (the latest, with Cosetta Zanoni, Giro, ghirotondo and other spelling stories, Erickson).


According to the expert, the child begins, for example, to speak in the best way by listening to adults who address him in a loving tone (paying attention to the rhythm and musicality of the words rather than to the meaning). For this, nursery rhymes and songs are excellent allies.

“For the little child, everything that happens around him is good and, consequently, to be imitated. If in his environment there is an older brother or an adult who writes in his presence, he will spontaneously copy the signs of writing. In all this, there is nothing wrong as long as the adult does not start explaining to him the meaning of each letter in detail ”, explains the pedagogist.

In the same vein, Beatrice Braga adds: “Often, the younger brothers approach, almost as a game, the complex world of symbols. By imitation, they begin to nurture curiosity for those 'inked hieroglyphs' which allow, once decoded and understood, to possess an invaluable ability ”.

Each child has his own rhythms

Growth, however, is not a set of identical stages for each child: this is a fundamental point on which all experts agree. Therefore, it is normal that there are those who show the desire to read and write long before the debut in the primary and those who do not.

“I don't think it's right, neither on the part of parents, nor on the part of kindergarten teachers, to block a 4 or 5 year old child's interest or motivation towards reading or writing words. It is necessary to always keep that subtle and attentive gaze towards the inclinations of the little ones and not to stop them with a 'It is not yet time!' or a 'You have to!' - says Carlo Scataglini, teacher specialized in recovery and support methodologies and author of several books (including the new titles of the 'Easy Reading' series, composed of a story + operative notebook, Erickson)

In other words, according to Beatrice Braga, each child has their own learning times and rhythms. In addition, everyone lives in a family and cultural environment that can offer them different stimuli that contribute to personal development. “For this reason, we teachers should not set the 'learning clock' at the same time for everyone! - says the primary school teacher. and the moral duty of an educator is to respect everyone's peculiarities and promote their development ”.

There is no 'right' and equal time for everyone

Precisely because each child has its own peculiarities, it is useless to look for absolute laws also for learning the ABC. Carlo Scataglini is convinced that he believes there are no behaviors and strategies that parents and teachers must necessarily adopt to ensure that children enter primary school already knowing the alphabet. “There is no precise moment that can be fixed from the outside and it is not fair to establish that 'today' the 4-5 year old child is ready so you have to submit letters and numbers to read and write - explains the expert.

In short, there is always a big difference between obligation and spontaneous interest. “Sometimes I meet in kindergarten children who look at the illustrations of my books (Nda series Read easy, Erickson) with great interest. They ask me a thousand questions, they ask me everything about the characters and how they came to my mind. Then they search among the words, they rage with all their commitment trying to recognize and read them. I like to watch them, they inspire me with great tenderness. I smile and let them do it ”, says the author.

In small steps, encourage the development of fine manual skills

On the question of the 'right' times to read and write, according to Rossana Colli, in general, it is better to wait for entry to primary school to explain the meaning of things, letters included.

“In the meantime, however, it is possible to encourage the development of fine manual skills, fundamental in learning to write, by proposing a series of playful and joyful activities during kindergarten - affirms Rossana Colli. In order to access the capital letters of the alphabet it is important that the children have practiced with the whole body, through movement, in the creation of standing straight lines, the vertical, and extended straight lines, the horizontal, curved and you are looking for… ”, says the pedagogist.

In the same vein, the teacher Michela Artusi believes that during the kindergarten, the child should be accompanied to develop all the skills of his age group well. From her point of view, during the last year, at the age of 5, it is important not to give space only to 'notebook' activities (Nda refers to pre-graphism). "It would be better, instead, insist more on fine manual skills which should by now be acquired when entering first class. It is important for us teachers that a child knows, for example, to open his case in the right direction, to cut, glue and color with different techniques ", says the primary school teacher.

To conclude: by playing, you learn

In view of the entrance to primary school, in the opinion of the 4 interviewees, the child should have the opportunity to mature (during kindergarten and at home), a series of prerequisites necessary for reading and writing without difficulty.

Also at home it is possible to propose fun and useful games to improve psychomotor skills. “A little game, for example, from the age of 4 and a half, is blowing soap bubbles with mum and dad. And then, draw the shape with the index finger in the air, on a wall, on the floor on the floor, on the table ... And finally on a drawing sheet with a soft wax crayon ”, suggests the pedagogist Rossana Colli.

As for the kindergarten, for Michela Artusi, also in this case, the game must be the protagonist without pushing too much on skills that fall within the acquisitions of the primary. “At times, the pre-graphing proposals of the last year encroach on the letters of the alphabet and it makes no sense because no school has the purpose of preparing for the next one. A too strong focus on pre-graphic exercises can make children anxious ”, says the teacher. At school, and also at home, from the teacher's point of view, reading aloud has great value, which prepares the child to listen and helps him to elaborate ... A useful skill for the future among school desks.

According to Carlo Scataglini, the child chooses the elements of his interest during the game and enriches it. The external stimuli and those he re-elaborates are often transformed in the form of narration, storytelling. “Well, I believe in the very strong value of narration, at the same time in play and in learning. And the stories and stories heard by an adult are a strong push for the child towards the motivation to read alone ”, concludes the teacher.

In the mymodernparents.com forum, mothers talk about shy children

YOU MAY ALSO BE INTERESTED IN: PERFORMANCE ANXIETY OF CHILDREN, STAGE MOMS AND DADS SPORT, BECAUSE PARENTS SHOULD NOT PROJECT THEIR EXPECTATIONS ON CHILDREN,

add a comment of Reading and writing before primary school: yes or no?