Recurrent respiratory infections: when the child is always sick 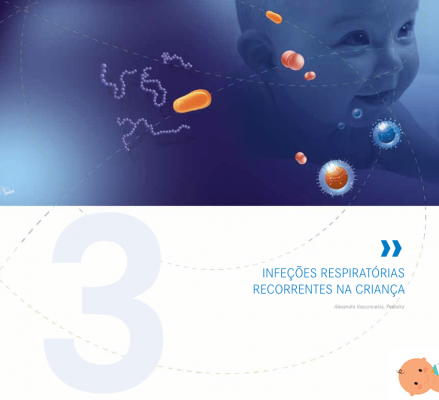 Cold, cough, sore throat or ear, fever. Maybe even bronchitis or pneumonia. There are children who, throughout the cold season, jump from one disease to another. We talk about recurrent respiratory infections: they are annoying, but generally harmless and tend to diminish with age.

Children always sick: that's who risks the most

"The most affected are preschool children, because they have an immature immune system, which is still learning to defend itself "explains Alberto Villani, head of the department of general pediatrics and infectious diseases of the Bambino Gesù pediatric hospital in the city and president of the Paesena Society of pediatricians.


This counts especially if they attend nursery schools and kindergartens, closed environments where pathogens circulate easily: a recent Norwegian study, published in the journal PLoS One, found potentially pathogenic viruses in the respiratory tract of 43% of preschool children.

But there are others too risk factors, starting from the environmental conditions in which the child lives: "Citizen smog, exposure to passive smoke, belonging to large families certainly do not help, and neither does the fact that the mother smoked during pregnancy" underlines the pediatrician. And again, boys and children with allergies are a bit more at risk. On the other hand, among the protective factorsbreastfeeding for at least six months. [Read also: Mother's milk, a universal medicine]

How to prevent recurring infections

"In the meantime, it must be lent attention to living conditions"Villani recommends." At home, for example, no smoke, and always well ventilated rooms. A varied and balanced diet, good sleep hygiene and frequent hand washing also help. "In general, according to the expert, the fact that the child can lead a "child's life" it is a valid preventive tool: often there are different needs at stake, but the child who spends the whole day away from home, between kindergarten or school and various activities, risks being weaker from an immune point of view.

Why do children need to wash their hands? Microorganisms on the hands of an 8-year-old child PHOTO

Tasha Sturm, a microbiologist at Cabrillo College (California) after returning from the park with her 8-year-old son asked him to leave his handprint in a Petri dish, a ...

In recent years, it has also been understood that some substances can be useful in prevention: vitamins C and D, probiotics, herbal extracts with echinacea and the so-called immunostimolanti o immunomodulanti, synthetic compounds or derivatives of bacteria which, in fact, stimulate certain immune functions. "They don't work miracles, but in some cases they seem to reduce the frequency and duration of episodes." Better anyway avoid DIY and consult your pediatrician, who will recommend the best product depending on the situation. Ditto when infections occur, especially with regard to antibiotics, to be used only in specific cases indicated by the doctor. [Read also the 10 tips to improve the immune defenses of children]

Numerous studies have been published in recent years showing the positive effects of Probiotics not only for the well-being of the intestine, but of the whole organism. In fact, probiotics, in addition to having the very important function of maintaining the intestinal microbiota in balance, also contribute to the health of the oral microbiota, a precious ally against respiratory diseases. The oral microbiota has a primary defensive role and acts as a sentinel towards potentials bacteria and viruses that can infiltrate the airways. For this reason, when the oral microbiota is out of balance (dysbiosis), children and adults are more prone to inflammation of the pharynx, larynx and tonsils.

According to some recent scientific studies, taking probiotics would help keep the oral microbiota in balance and prevent and decrease the incidence of respiratory infections. Particularly effective, in this sense, seems to be Streptococcus salivarius K12. It is a probiotic strain that has been shown to be effective in reducing recurrent episodes of pharyngitis and tonsillitis in children.

When to be alarmed

In the vast majority of cases, recurrent infections - which are also very annoying and negatively affect the quality of family life, with parents losing days of work or involving grandparents and nannies in the management of little sick children - are substantially harmless. They also tend to resolve spontaneously with age: when the child reaches 7/8 years, they stop showing up so often. [Read also: Always sick child, why?]

Sometimes, however, they can be a sign of something more serious, and the first warning sign is if they really are too frequent or severe. "If the child gets sick more than twice a month for three months in a row, or has more than one bronchopneumonia in a season, it is worth doing some in-depth investigation" explains Dr. Villani. A blood test provides useful information, but an x-ray may also be needed. "In these cases the infections could be caused by one anatomical malformation of the airways, from the presence of a foreign body or give a 'immunodeficiency (impaired immune defenses). The latter is also often signaled by the presence of skin abscesses ".

add a comment of Recurrent respiratory infections: when the child is always sick