Rooming in, what are the benefits for mom and baby 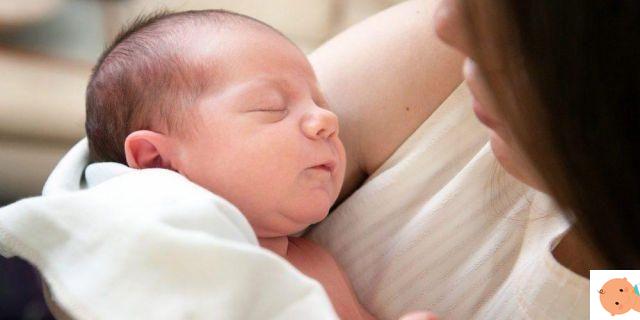 Ever heard of rooming in? Mommy, you are close to giving birth, you can't wait to hold your little one in your arms, the emotion puts you on high enough to counteract the fatigue of the last weeks of pregnancy, but a question continues to make room in your head : after I have given birth, will I have the strength and clarity to look after my child immediately?

What is rooming in

For over ten years, hospital nurseries have been almost completely abandoned (let's say that they are now a real rarity. Or rather they exist but they are never full of children) in favor of the practice of rooming in, baby and mother in the same room 24 hours on 24 immediately after giving birth. A choice that has not always been positively received by parents.

If previously the newborn babies were looked after in the nurseries by the nursing nurses thus giving the mother a few days of recovery, today the focus is on immediately enhancing the emotional bond between mother and child and breastfeeding. The World Health Organization (WHO) and UNICEF, defining the standards for the so-called "Child Friendly Hospitals", suggest placing the newborn in the same room as the mother. Obviously unless there are particular reasons to divide them.

The advantages of rooming in

The not exactly revolutionary choice of rooming in (in the past our grandmothers already practiced it), has advantages in itself that should not be underestimated. First of all, the mother-child relationship improves, already strong during the nine months of pregnancy, now favored by direct and constant contact, by the smell that the little one learns to recognize and by the sense of warmth and security that the mother gives him.


Secondly, rooming in favors breastfeeding precisely because the baby has the ability to latch on when he feels the need and, at the same time, milk is produced more quickly. Some international studies of recent years even underline the ability of babies to move and latch onto the breast spontaneously, if they are placed on the mother's breast as soon as they are born.

Finally, the trauma of returning home and of feeling totally abandoned in the care of the newborn decreases, so strong in the cases of the old nurseries, when the nurserywomen thought of everything. With rooming in, both parents immediately have the opportunity to take care of the child and to ask for support, if necessary, from the hospital staff.

Rooming in and role of the dad

An all-round paternal involvement is the so-called integral rooming. The father can remain without time limits in the room with the mother and the baby and thus change the probable role of passive spectator behind a glass. The re-created harmony and balance would not only help the physical and psychological well-being of all family members, but would allow parents to reduce anxiety about a new dimension and difficulties due to inexperience.

Rooming in: yes, but without stress

Beyond the clear benefits, however, one must never turn into heroines! Better to ask for help, especially after a complicated birth or pregnancy, and if you need the possibility of using the nursery. A few hours of rest will be good for the mother and certainly will not interrupt the journey that began months before the mother-child bonding.

add a comment of Rooming in, what are the benefits for mom and baby