Salmon in pregnancy. It's possible to eat? 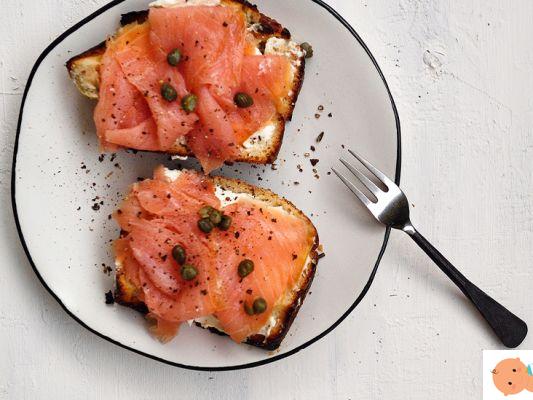 Il salmon in pregnancy It represents a excellent source of omega 3. Whenever possible, it is preferable to fish instead of farmed, as it contains a higher concentration of these precious nutrients. How to consume it though? Can it be considered safe for pregnant women?

In general the consumption of raw fish (and therefore also that of salmon) it is always not recommended due to the risk of contamination with virus (hepatitis A, battery (salmonella,Listeria) and other parasites (Anisakis). That is unless you are absolutely certain that the fish was thermally knocked down and that after the treatment it was kept in perfect hygienic conditions.

Outside the home, however, it is difficult to be sure of the treatments performed and if the hygiene rules are not followed scrupulously it is always possible that a new contamination will occur. If you are not sure of the procedures followed and compliance with hygiene rules, it is better to abstain. At home you can have more control of the situation, but keep in mind that the freezer does not always reach -18 ° C.

Treatments such as marinating and smoking salmon can reduce the risk of parasite contamination, but they do not completely eliminate the risk.

For this reason, to be absolutely calm it would be better to avoid smoked salmon or marinated with lemon or vinegar. Also in this case, as in that of raw fish, an exception can be made if you are sure that the fish has been previously killed correctly.

Smoked salmon is more at risk of contamination by Listeria monocytogenes, a bacterium that adapts perfectly to environments where other food bacteria (such as the more famous salmonella) do not survive, and is dangerous in pregnancy due to the damage it can cause to the fetus.

Well cooked salmon? Yes thanks! In order not to risk food poisoning.

Fish not only contains high biological value proteins, but it also contains polyunsaturated fatty acids - such as the famous omega 3s - essential for the development of the fetal nervous system. The ideal is to insert it at least two or three times a week.

How to cook salmon while pregnant

It is certainly better to eat salmon only if it is well cooked, in order not to risk food poisoning. Perfect cooking in the oven, in a pan or on the grill, as long as you ensure a perfect cooking.

Salmon in pregnancy and mercury

Like all large-sized fish, such as tuna or swordfish, salmon can also contain large quantities of mercury, a heavy metal known for its negative effects on the central nervous system, including the fetus.

Obviously, consuming a steak of salmon a week cannot cause an accumulation of mercury levels in the maternal organism, so it is sufficient to consume it in moderation.

During pregnancy, all types of fish are indicated (in portions of 100-150 grams): from the leanest and easily digestible ones such as plaice, sole, sea bream to the fattest ones such as salmon, tuna and swordfish.

add a comment of Salmon in pregnancy. It's possible to eat?