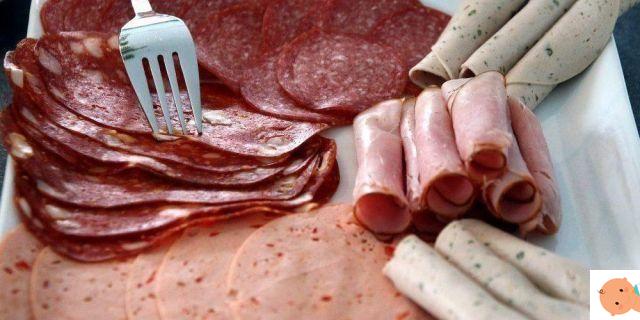 What wouldn't you do for your children, right? Even giving up a ham sandwich ... How many of you have already asked your partner as a birth gift? Not flowers, but salami rosettes! A deso to fulfill, after having spent the whole pregnancy without being able to eat. Yes, because not all cured meats are allowed. Many fall into the "black list" of foods to avoid when pregnant because they can be dangerous to health. Let's see which ones are and which ones are allowed.

We have already spoken several times about nutrition during pregnancy, underlining a very important aspect: a pregnant woman's diet must not lack any nutrients. A complete diet must in fact provide for the right amount of carbohydrates, proteins, fats, fibers, mineral salts and so on. Any deficiencies (for example in the case of vegetarian women) must be ascertained by the doctor who will compensate them with specific supplements.

Let's go back to the subject of cured meats. The need for protein increases progressively during the weeks of pregnancy. According to the so-called LARN (Nutrient and Energy Reference Intake Levels for the Del Paesena population) established by the Del Paesena Society of Human Nutrition (SINU), the amount of protein must increase to this extent:

These percentages are valid for women with a normal weight. In case of overweight or, conversely, excessive thinness, the quantities may vary. Obviously, the doctor decides.


Sources of protein are foods of animal origin (meat, fish, milk and its derivatives, eggs) and vegetables (especially legumes and cereals). Cured meats fall into this category, even if you shouldn't overdo it.

Salami in pregnancy: in what quantities

The cured meats belong to the category of processed meats. As the term suggests, they are subjected to certain procedures, such as salting, seasoning or smoking. The raw material is therefore treated to be "transformed" into a different product: a very tasty salami.

The World Health Organization recommends not abusing processed meats. And it is advice that is valid at any age. It is therefore understood that even pregnant women should not eat too many, also because, in addition to the high salt content, they are quite caloric. Additionally, they may contain some preservatives that aren't exactly good for health.

Ask your gynecologist for advice on the amount of cured meats to take and how many times a week. In general, he should suggest that you eat around 50-80 grams no more than 2 times a week.

Cured meats in pregnancy: which ones are prohibited

The cured meats banned with the belly are raw because they can be a vehicle for the transmission of Toxoplasma gondii, responsible for toxoplasmosis, an infection that can be risky in pregnancy. Red light then at:

There are some particularly lucky mothers who, however, can eat them: they are the "negative toxo" ones who have already contracted the infection before becoming pregnant and are therefore immunized. If you get toxoplasmosis once, you are protected for life. This is why it is essential to carry out the Toxo-test at the beginning of pregnancy and to adjust accordingly.

Cured meats during pregnancy: which ones are allowed

Green light to everything that is cooked:

Toxoplasmosis is an infectious disease transmitted by a protozoan, Toxoplasma gondii. The main vehicle of transmission is the cat or, rather, its feces. In fact, the protozoan produces infected oocysts in the intestine of the cat which are expelled through the feces. In this way the soils on which they are deposited become infected.

How does the infection of toxoplasmosis happen? Through 4 transmission ways:

It is therefore easy to understand why raw foods should not be eaten and why fruits and vegetables should be washed with extreme care when you are expecting a baby and you are not immune to toxoplasmosis. Transmission of infection occurs through the placenta and can be dangerous.

The risks of toxoplasmosis

It is important that the Toxo test is repeated several times during the pregnancy to see if the expectant mother is infected. The infection has the most serious consequences especially if contracted in the first trimester, but this does not mean that in the following months it is a "walk". You should take all possible precautions to avoid contracting it, including having your cat clean out of your cat's litter box.

If contracted in early pregnancy, toxoplasmosis can cause abortion, fetal death, intrauterine growth retardation. In the second trimester it can cause neurological damage (hydrocephalus, microencephaly, intracranial calcifications) or ophthalmology (retinocoroiditis, strabismus, blindness), epilepsy, psychomotor and mental delays. If taken in the third trimester, the newborn is born apparently healthy, but may develop neurological and eye problems late (even after years). It will therefore need to be checked regularly.

Salami during pregnancy: some tips

add a comment of Sausages during pregnancy, which ones you can eat