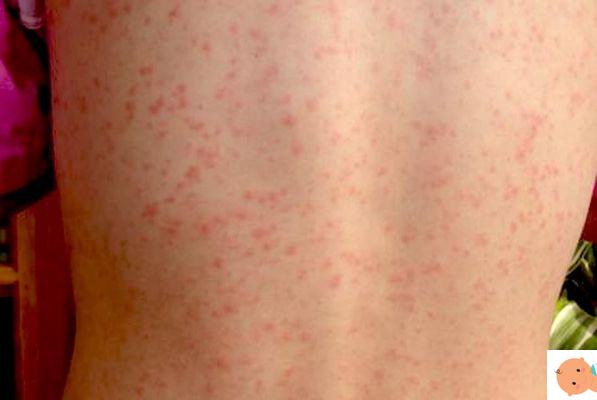 "Each of these infections has different characteristics, but in all three cases they are transmitted through the airways and saliva, so the infection is quite easy, especially if there is a child in the house who is inserted in the community", Emanuela says. Taricco, gynecologist at the Luigi Sacco Hospital in our city. "On the other hand, it is difficult to predict and prevent them, because they have a long incubation period, so the baby is contagious even before symptoms appear."

Scarlet fever and mononucleosis, if contracted during pregnancy, do not cause particular problems either to the expectant mother or to the fetor, while some precautions are needed with chickenpox.

It is a bacterial infection caused to group A beta hemolytic streptococcus and manifests itself with pharyngitis, fever and, in children, rash, which allows the disease to be identified rather unequivocally.

If contracted within nine months, it does not cause any fetal complications or harm the expectant mother in any way, as long as it is treated with antibiotics compatible with the state of pregnancy.

Mononucleosis is a viral infection, caused by the Epstein-Barr Virus (EBV), which causes low-grade fever, asthenia and a general lowering of immune defenses, but in younger children the disease often begins with symptoms so mild as to be confused with other trivial infections .

"Contracting it during pregnancy does not involve any additional complications or risk of fetal malformations, the only drawback is that it could depress the maternal immune system and make the future mother more frail against other possible infections", emphasizes Dr. Taricco.

"The diagnosis is made with an immune positive result for EBV on blood. The disease resolves spontaneously within a few weeks and no therapies are necessary; the only recommendation is to rest and keep the child at home until complete recovery, so as not to expose him to other possible infections ".

It is a viral exanthematous disease caused by Herpes Zooster (HVZ). Contagion is very easy as it occurs by direct contact with respiratory secretions or infected vesicles and often difficult to prevent because the subject is potentially contagious from two days before the onset of the rash until complete resolution of the vesicular lesions. The incubation is very long (14-16 days).

What happens if you get sick during pregnancy?

"It depends on the gestational period in which the maternal infection occurs" replies the gynecologist: "in the first trimester, the infection could very rarely be associated with minor malformations, which can be ascertained by doing a level II morphological ultrasound. contracted in the second trimester of pregnancy, there is no risk of malformation, while it is close to the birth that the most attention must be paid: if the mother gets chickenpox at the end of pregnancy and arrives near birth with the disease in the active phase, there is a risk that upon passing through the vaginal canal the baby becomes infected and develops a neonatal chickenpox with major sequelae.

To prevent the maternal-fetal transmission of the infection, it is good to hospitalize the woman to try to postpone the birth and to implement drug therapy with intravenous antivirals for 5 days (antiviral therapy is also prescribed in the other trimesters, to reduce the intensity of symptoms, which in adulthood are increasingly accentuated compared to pediatric age, but it is a therapy by mouth that can be followed from home). If the course of therapy has not been completed in time, the neonatologist will evaluate the opportunity to also submit the newborn to antiviral therapy ".

Plus: Cytomegalovirus: the enemy of mothers and children and Toxoplasmosis in pregnancy? No thanks

add a comment of Scarlet fever, mononucleosis and chickenpox in pregnancy